War with Iran Is Inevitable and Near

As I drove to visit my Mother this morning, I heard this report on CBC and knew that the third war was about to start. Now that BushCo is having the lackies (CBC called them anonymous sources) trot out this crap that we’re all supposed to believe, it seems apparent that they do not intend to wait for our compliance and complicity. It is time to impeach Dick Cheney and his sidekick, Junior. Richard Jehn

From Another Day in the Empire 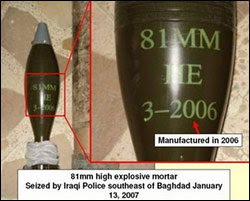 Is there something wrong with this picture?

“America today blamed Iran for the deaths of 170 US troops inside Iraq, accusing Teheran of supplying insurgents with increasingly sophisticated bombs,” reports the neocon-infested UK Telegraph, a trusty propaganda tool. “Senior defense officials in Baghdad said that Iranian-supplied “explosively formed projectiles” were frequently being used against coalition forces” and “the ‘highest levels’ of Iran’s regime were responsible for giving them to Shia militias in Iraq.”

Although the Telegraph does not mention what particular Shi’a group would use the purported Iranian “explosively formed projectiles” against American troops, we must assume they are making reference to Muqtada al-Sadr’s Mahdi army. It must be remembered al-Sadr mobilized his militia after occupation authorities closed down his al-Hawza newspaper in March, 2004. In general, however, Shi’a militias are too busy killing Sunnis, and vice versa, although late last month the killing of five American soldiers at a supposedly secure U.S. facility in Karbala was blamed on “Iranian intelligence agents in conjunction with Iraq’s Shiite Mahdi Army militia,” according to the Examiner. For some unexplained reason these militant Shi’ites decided to dump the bodies of their victims in the town of Mahawil, a predominantly Sunni area.

But never mind. As the photo above supposedly demonstrates, the Pentagon has seized a number of 81mm mortar rounds, used as roadside bombs. “These bombs are specially designed to penetrate heavily armored military vehicles and are capable of crippling the US army’s main battle tank, the Abrams M1,” the Telegraph ominously reports, or rather reads from a Pentagon script. “They have killed 170 US troops since June 2004, according to the American officials. They added that some weapons have been captured and they bore the hallmarks of having been manufactured in Iran…. Many were made as recently as last year—ruling out the possibility that they could have been left over from the many arms caches scattered across Iraq by Saddam Hussein’s regime.”

Of course, as this is a sloppy neocon ruse, as per usual, there is a problem here. Can you guess what it is?

If you guessed the date, you win a Cupie doll. For some reason the geniuses at the Pentagon have failed to explain why the Iranians used a date from the Christian Gregorian calendar and not one from the Islamic Persian calendar. According to the Muslim calendar, the date stenciled on this mortar shell should read 1427, not 2006. And why did Iran, a country speaking and writing in Persian, written in a version of the Arabic script, decide to label their shells in English? Maybe they thought it would fool the infidels?

I’m not taking the bait. As usual, this attempt to frame Muslims stinks of neocon sloppiness. Once again, the neocons blow it. Not that it particularly matters, as most Americans are oblivious and, besides, millions of them still think Osama and Saddam are twin brothers.