We Have the Answer, and It Is Us 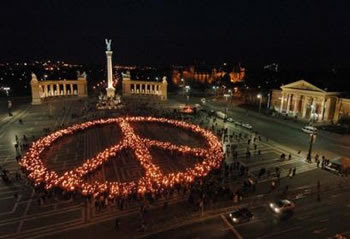 This moment in time contains so much hope and possibility and so much death and destruction. These are not easy times and they are not getting easier — and so I thought that I would take on some of the myths that burden, complicate and undermine our peace movements.

We have internalized some of these myths pretty deeply. We even reinforce them with one another. So, I thought it might be a valuable exercise to spend some time together dismantling a few of them.

What follows is my highly subjective (and certainly incomplete) compilation of the myths of the peace movement.

Does any of this sound familiar? This is what I hear from brothers and sisters over and over again. Now, these myths are not equal — some are bigger than others. And some have a kernel of truth (which is why they are myths and not lies) but cumulatively this constant bombardment is a real bummer.

So, I’m saying they are not true — I’m saying that there are young people, and we are having an impact, and that no one person in any position of power is going to offer any answer automatically or just because they promised they would.

I’m saying we are the ones we have been waiting for, that we are creating the alternative. If that is what we are doing, not just going through some exercise of opposition, some knee-jerk resistance or recalcitrance, then we have a lot of work ahead of us — and need to take the work more seriously, and ourselves less so.

And that starts with dismantling myths.

Myth One: In the 1960s, the peace movement was so much more powerful and so much cooler than we are today.

I want to start with the 1960s one. 2008 is a big year for revivals and recollections and reunions for the historians and the academics and the activists. 40 years since: the police riot in Chicago, the assassination of Martin Luther King and of Bobby Kennedy, Tommie Smith and John Carlos giving the black power salute as they received their Olympic medals, since Catonsville. And those are just a few of the things that happened in the U.S. that year — around the world there was Prague Spring, the massacre at Tlateloco, the Paris uprising, the Biafran war. Here we are forty years later, and it is a potent moment for reflection.

But, the demonstrations at the Democratic National Convention in Denver this summer are happening under the slogan “Recreate Sixty-Eight.” Disclaimer: Now, I don’t mean to undermine or disparage the work of activists and organizers in Denver and all of the friends who will go to Colorado this summer to demonstrate, and at the same time implore the democratic party to be the party of the people.

I like the rhythm of language a lot. And I love alliteration. In that way — Recreate Sixty Eight is AWESOME. I love how it sounds. The organizers have their reasons for choosing it beyond how cool it sounds. There are a lot of lessons to learn from that era, and a lot of good things that happened that year.

But here we are in 2008 and we need to be building a movement and building bridges between movements (because we are not a monolith) that is rooted in an analysis and understanding of this moment, this place, this context.

I was struck to read recently that at the beginning of 1968, less than half the American people believed the war in Vietnam was wrong, 45%, and that more than 15,000 U.S. soldiers had been killed and nearly 100,000 wounded. So the Vietnam War was both more bloody and more popular than the war and occupations in Iraq and Afghanistan are in 2008.

In every way, this nation is less homogeneous than it was 40 years ago: we are racially, ethnically, religiously more diverse and more stratified. We are so much poorer, and so much richer than we were forty years ago. We are less innocent. We are less naïve. In short — we are different. And this war is different. And so our movements must also be different.

But the media compares ‘68 and ‘08, the peace movement then and now. Some activists then and now compare us, some leaders (those who survived) compare that time to now as they seek new relevance.

But, we must not fall sway to this comparison.

We live in the United States of America — a deeply nostalgic and deeply ahistorical nation saddled with a case of amnesia that approaches pathology. My SAT prep teacher would be so proud of that sentence. This is a dangerous and counterproductive combination — nostalgic amnesia. And it infects our peace movements. We are tempted to fetishize the past instead of learn from it. The past is constantly being rewritten and repackaged and then sold to us as a distorted reflection in a house of mirrors. So, we don’t want to recreate sixty-eight; we want to harness some of that energy, that sense of power and possibility and apply it to our very different context today.

Myth Two: There are no young people active in the peace movement. Don’t they care?