When Will We Become So Ashamed We Stop? 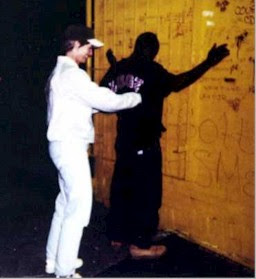 Going to the grocery store, visiting a friend and walking home from work or school are all ordinary, everyday occurrences. But not so for hundreds of thousands of people, mostly from African-American and Latin@ communities, who are stopped, questioned, asked for their I.D., searched and often arrested here in New York—and around the country. It happens to many youth and even to children.

At a time when more white people appear to be rejecting racism at the polls, racial profiling by police departments and other state agencies is on the rise. It is systemic and deeply entrenched in the “criminal justice system” nationwide.

Statistics given in new studies and reports starkly bear this out. But the statistics cannot convey the intimidation, anxiety and anger that so many people, especially Black and Latin@ youth, must live with on a daily basis, nor the effect this can have throughout their lives on them and their families.

In the first quarter of this year, New York City police, by their own report, stopped, questioned and/or searched 145,098 people, more than half of them African Americans. At this alarming rate, a record 600,000 people will be stopped this year.

In the last two years, nearly 1 million New Yorkers were harassed by police in this manner—90 percent of them people of color. That’s 1,300 a day. And it’s legally allowed.

These operations, just in the past two years, have put more than 1 million innocent people, mostly African-American and Latino, into the huge police database; they are subject to future criminal investigations merely by their inclusion there.

This entry was posted in RagBlog and tagged African-American, Official Repression, Racism. Bookmark the permalink.