Who Hangs With Extremists? Sarah Palin and the AIP 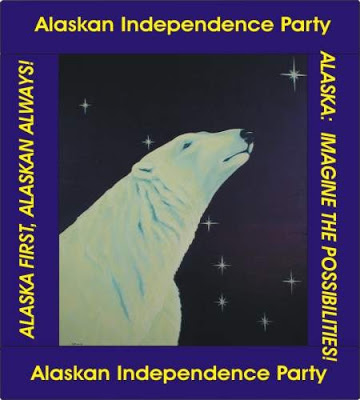 ‘The Alaskan Independence Party is part of a network of extreme right wing groups around the US, some of which have links to white supremacist organizations.’
By Sherman De Brosse / October 6, 2008

Sarah Palin has courted and developed close ties with the secessionist Alaska Independence Party. These people are committed to secession and want a vote on the subject. Most voters in the lower 48 see secession as treasonous, yet almost half of of them will vote for her simply because of a party label, and perhaps her extraordinary charm and charisma.

The Alaska Independence Party was founded in the 1970s by an outspoken gold miner, Joe Vogel, who had many battles with the Park Service and the EPA. Vogel declared, “I’m an Alaskan, not an American. I’ve got no use for America or her damned institutions” and “[T]he fires of Hell are glaciers compared to my hate for the American government.” He founder added in 1991, “And I won’t be buried under their damn flag.” Like his followers, Vogel was an extreme-right winger. He said, “The problem with you John Birchers’ is that you are too damn liberal!”

The party opposes environmental legislation and the federal ownership of land in Alaska.

In the 1990s, it had a surge of membership, attracting militia-types. Including Todd Palin, who was a member from 1995 to July, 2002, when he became an independent. That was a time when his wife was running for Lieutenant Governor on the Republican ticket.

Sarah was seen with Todd at the party’s 1994 convention, and she addressed its convention in 2000 and addressed the convention again this year, but the last was videotape. She spoke warmly of the work of the party and told them, “Keep up the good work!” Party officials speak warmly of Sarah and boast that they worked hard for her election as governor in 2006.

That party’s slogan is “Alaska first-Alaska always.” John Mc Cain’s slogan is “Country First.” How can Sarah and Todd reconcile the two slogans. How can a voter take a chance on a candidate who had clearly flirted with a secessionist fringe group?

It sent delegates to the First American Secessionist Convention in Burlington Vermont in 2006. Present were some organizations linked to the neo-Confederate cause and white supremacy. When Timothy McVeigh was arrested he was wearing the tee shirt of one of these unsavory outfits.

It has close ties to the U.S. Constitution Party, which claims it as a state affiliate. That party was founded by Howard Phillips, and it is the home of Christian Reconstructionism or Dominionism. Dominionism looks to place its kind of Christians in political power. They would rule according to Biblical law. These people want to establish a theocracy in the United States, and they are completely opposed to separation of church and state. There are also many Dominionists in the Alaska Independence Party, and it is very likely that Sarah Palin is a Dominionist because she has attended three churches with Dominionist ties.

Alaska Independence Party leaders urge followers to “infiltrate” the major parties. Dominionist preachers urge the same tactic. If Palin were on some Dominionist mission, she would not be likely to admit to it.

2 Responses to Who Hangs With Extremists? Sarah Palin and the AIP