Why’s There no Money for Education? (Hint: War) 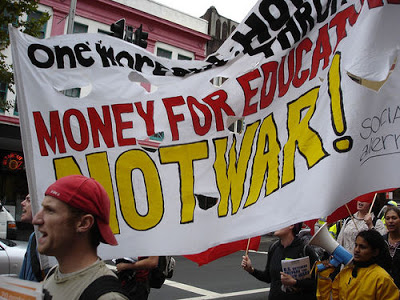 Photo from .M.’s photostream / Flickr.
The legacy of ‘starving the state’


The project of privatizing the educational system, by starving the public system, has been paralleled by a fundamental feature of American government, the existence of a Permanent War Economy.

The Tippecanoe School Corporation in Indiana, which educates over 11,000 students in 17 schools, is being forced to cut its budget by $8 million by year’s end. This means firing over 150 teachers and staff. In addition, during the next round of contract talks teachers will be asked to take a cut in salary and benefits. Supplies and expenses for the classroom and for travel will be cut. Of course, increasing class size is in the mix as well.

In addition, the state higher education system has been ordered to cut millions of dollars in expenditures, including freezing and reducing salaries, eliminating new hires, and increasing class size. Purdue University has to cut $30 million over the next two years while the size of undergraduate classes explodes and applications for graduate school skyrocket. And of course the economic crisis in education, K through college, is occurring in almost every state in the country.

Robert Reich, Professor of Public Policy at the University of California, summarized the crisis very well when he reminded readers that states cannot run deficits to cover educational costs. (In Indiana, recent “reforms” have shifted educational costs from property taxes to the sales tax. In a recession spending and sales taxes go down and so do financial resources for education.)

Across America, schools are laying off thousands of teachers. Classrooms that had contained 20 to 25 students are now crammed with 30 or more. School years have been shortened. Some school districts are moving to four-day school weeks. After-school programs have been canceled; music and art classes, terminated. Even history is being chucked. Pre-K programs have been shut down. Community colleges are reducing their course offerings and admitting fewer students. Public universities, like the one I teach at, have raised tuitions and fees.

While we all know this, it is imperative that we revisit the crisis in education and its connections to history, economics, and budget priorities. For example, New York Times columnist and economist, Paul Krugman recently reminded us that a critical component of Reaganomics, and what the world has since called “neoliberalism,” is the privatization of any and all public institutions.

Every instrumentality of the state should be used to smash the state, except for its support functions for finance capital and the military. By cutting government spending, the Reagan administration began the historic process of “starving the beast.” Downsize public institutions so they can no longer deliver.

As Krugman put it:

Rather than proposing unpopular spending cuts, Republicans would push through popular tax cuts, with the deliberate intention of worsening the government’s fiscal position. Spending cuts could then be sold as a necessity rather than a choice, the only way to eliminate an unsustainable budget deficit.

In the field of education, the “starve the beast” privatizers advocated for charter schools, arguing that the private sector can educate the young better than the public sector. As Diane Ravitch, author of The Death and Life of the Great American School System: How Testing and Choice Are Undermining Education, has pointed out, despite statistical manipulation there is no evidence that private schools perform any better than the underfunded and downsized public schools.

The “starve the beast” approach also developed a rationale for declining public school performance to justify further privatization. The problem with public education, they claimed, was the teachers. And of course not all teachers were performing badly in their jobs. No it was the teachers in unions that were dragging down our educational system.

The project of privatizing the educational system, by starving the public system, has been paralleled by a fundamental feature of American government, the existence of a Permanent War Economy. Ever since the Korean War every administration has put military spending as the first national priority, such that over much of this period half of every tax dollar went to military spending.

What this looks like in the state of Indiana and Tippecanoe County (and you can find out comparable data for your own community by accessing the National Priorities Project) includes the following:

Taxpayers in Indiana will pay $10.7 billion for total defense spending in FY2010. For the same amount of money, the following could have been provided:

In Lafayette, Indiana, the population hub servicing most of the Tippecanoe School Corporation children, $85.8 million in local taxes going to military spending in 2010 could provide the following:

A call for “money for education and not for war” is critical to improve the lives of young people today and tomorrow. Diane Ravitch puts it succinctly:

I have not changed my fundamental belief that all children should have a great education that includes not just basic skills, but history, literature, geography, civics, the arts, science, foreign languages, and physical education.