Will You Explain the Surgical Use of a Five-Hundred Pound Bomb in a Densely Populated Suburb? 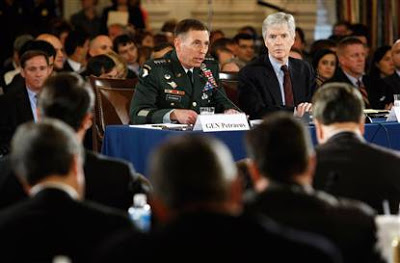 On Generals Testifying Before Congress: A Mash Note
By Fred Reed, April 14, 2008

Whenever I see that some dismal general will testify to Congress regarding the war against Iraq, I imagine the first paragraph of his Power Point presentation:

“All metrics show a downsurge in the violence in Iraq, and a continuing improvement in indicators of the production of a better life. Next slide. The Iranians are aiding the enemies of America, and must be bombed. This is a recording.”

What solemn, fraudulent, emetic mummery. Congressmen will—do—ask the General puffball questions, after which they will do whatever the President tells them to do. I can make no criticism of this. It is the American way. Still, may I suggest a few questions I would like to see the General, any general, asked?

3) You have expressed a commendable admiration for our soldiers, saying that they are the finest young men of our nation. Would you let your daughter date a black Pfc. with a GED? A kid named Gonzalez with tattoos?

4) Permit me a personal question, General. Have you ever said anything but “yes” to anyone who could affect your chances of promotion? Can you give us examples?

I have received a letter from a squad leader in Baghdad who suggests that always saying “yes” qualifies you as a streetwalker but not as a soldier. I am sure this isn’t true. That is, I am sure you could be a soldier as well. Will you explain to us why the sergeant is wrong? Can you give the Congress a reason to believe that anything other than your career matters to you?

Read all of it here. / Fred on Everything

This entry was posted in RagBlog and tagged Congress, Iraq, Military. Bookmark the permalink.