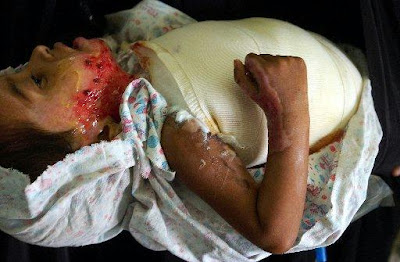 Hospital In Baghdad Casualty of US Air Strike
May 3, 2009

A hospital in the Iraqi capital’s Sadr City, a Shiite militia stronghold, was damaged in a US air strike on Saturday, wounding around 20 people, medics and witnesses said.

A medic at the Al-Sadr hospital which was hit said women and children were among the 20 wounded in the strike, which a security official said took place at around 10:00 am (0700 GMT).

The US military confirmed the air strike but said it targeted “known criminal elements”.

“I can confirm that we conducted a strike in Sadr City this morning. The targets were known criminal elements. Battle damage assessment is currently ongoing,” a military spokesman told AFP.

Witnesses said the target of the strike, in which US forces dropped several missiles, was a small house adjacent to Al-Sadr hospital and used as a rest area by Shiite pilgrims.

The impact of the strike damaged more than a dozen ambulances belonging to the hospital, one of the three main medical facilities in the district, and also shattered windows of the building, an AFP reporter at the scene said.

That hospital and another major facility in Sadr City had already taken in 25 dead bodies between Friday afternoon and 10 a.m. Saturday, when the strike occurred, hospital officials said. None of the injuries was life threatening.

The U.S. military is facing growing criticism over what residents describe as mounting civilian casualties in Sadr City, a densely populated slum of some 2.5 million people, which has seen heavy clashes over the past six weeks between U.S. and Iraqi forces and militiamen loyal to the hard-line Shiite cleric Muqtada al Sadr.

A senior Iranian official accused the U.S. military of attacking Iraqi civilians, telling the official Fars News Agency that Iran would pull out of talks with the United States on Iraqi security unless the attacks stop. The countries held three rounds of talks last year on Iraq — the highest level bilateral talks since 1980 — and are due to meet again this year.

U.S. military officials have repeatedly said they try to avoid civilian casualties. They accuse Iran of arming and training Iraqi militias, a charge that Tehran denies. American officials in Baghdad were reviewing the Iranian report but didn’t immediately comment on it.

Since Iraqi Prime Minister Nouri al Maliki’s Shiite-led government launched an offensive against Sadr’s Mahdi Army militia in the southern port city of Basra in March, Shiite militants have targeted U.S. and Iraqi troops in the sprawling, maze-like slum in northeast Baghdad that is becoming increasingly deadly for American soldiers.

Sadr has called on his followers to end the American occupation of Iraq. American military officials say that militants are using houses in Sadr City as bases from which to fire on U.S. and Iraqi troops and launch mortars into the Green Zone, the heavily fortified seat of government in Baghdad.

Lt. Col. Steve Stover, a U.S. military spokesman, said that the strike near the Sadr Hospital destroyed a house that American intelligence reports described as a command center for militiamen.

“It did not hit the hospital,” Stover said. “Based on the proximity of the house, there may have been shattered windows.”

A hospital official said that the explosion shattered all the windows and sent many doctors running from the building, leaving the emergency ward without enough personnel to deal with injury victims. Television footage showed several ambulances with shattered windows and hospital staff racing through corridors with bleeding victims strapped to gurneys.

“Some of those injured were patients who were on their way into the hospital. Others were just passing by,” said the hospital official, who requested anonymity for security reasons.