Winning the War on Terror: Not in Afghanistan 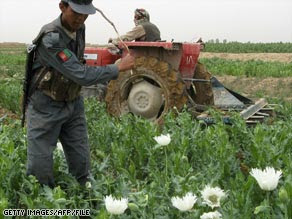 LONDON, England — The Taliban insurgency is widening its presence in Afghanistan and “closing a noose around Kabul,” an international think tank report says.

The report (PDF) — issued Monday by the International Council on Security and Development (ICOS) — said the Taliban movement “now holds a permanent presence in 72 percent of Afghanistan, up from 54 percent a year ago.”

NATO, which commands about 50,000 troops in the country, disputes the figures.

Titled “Struggle for Kabul: The Taliban Advance,” the report said the international community must ramp up grass-roots economic and humanitarian relief to stop the Taliban, the group that once ruled Afghanistan and harbored the al Qaeda terror network when it attacked the United States in 2001.

The report said the Taliban have expanded from the country’s southern region to the western and northwestern provinces and near Kabul, “where three out of the four main highways into Kabul are now compromised by Taliban activity.” 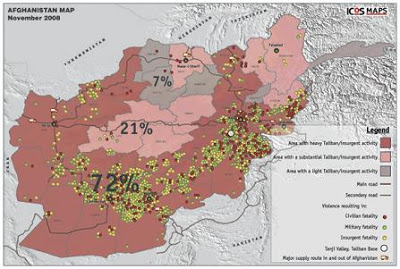 Dark Pink: Permanent Taliban Presence (72% in 2008) = Average of one or more insurgent attacks per week, according to public record of attacks. It is highly likely that many attacks are not publicly known.

Light Pink: Substantial Taliban Presence (21% in 2008) = Based on number of attacks and local perceptions (Frequency of Taliban sightings)

Grey Areas: Light Taliban Presence (7% in 2008) = Based on number of attacks and local perceptions (Frequency of Taliban sightings)

The colour coded dots on the map represent civilian, military or insurgent fatalities since January 2008

“Confident in their expansion beyond the rural south, the Taliban are at the gates of the capital and infiltrating the city at will,” according to the ICOS report.

Archer explained the report’s methodology, saying that “permanent presence” is established when there has been one more or insurgent attacks per week in a province.

NATO spokesman James Appathurai, speaking Monday in a BBC radio interview, argued the methodology was faulty. He also said that while the state of affairs “is not exactly at a tipping point of success,” it’s not as bad as the report suggests.

But ICOS’ Archer says the evidence shows that the “Taliban are calling the shots, politically and militarily.”

The report says there has been “talk of reconciliation and power sharing” between moderate Taliban and elected officials nationally. It says the Taliban have filled a governance void locally.

ICOS says military “intervention and intelligence” should continue to be supported, and it wants the number of troops under NATO command increased to 80,000. But military action alone isn’t the answer, it said.

Archer also echoed the report’s assertion that even after seven years in the country, the international community hasn’t been able to make sure that every Afghan citizen has access to food and water and that there has been a “lack of effective aid and development” in the country.

ICOS said the Taliban use strong recruitment and propaganda efforts to make inroads among local Afghans — many of whom are disappointed by the failure of the West to eliminate grinding poverty and angered by civilian casualties caused by Western airstrikes targeting insurgents.

The report calls for alternatives to fighting the Afghan drug trade, which helps fund Islamic militants and has a long reach into Western cities.

It said that “forced poppy eradication and chemical spraying” to combat the production has served to aggravate “the security situation in Afghanistan, precluding the very reconstruction and development necessary to remove Afghan farmers’ need to cultivate poppy.”

It says the poppy crop should be used for medical purposes in an effort to bring “illegal poppy cultivation under control” and to address the lack of alternatives communities have to the income provided by opium farming.

“In this process, all economic profits from medicine sales remain in the rural community, allowing for economic diversification. The ‘fair trade’ brand of Afghan morphine generated by the scheme would also provide emerging and transitional economies with access to affordable essential painkilling medicines,” the report said.

President-elect Barack Obama has said Afghanistan is the central front in the war on terror and wants to deploy more troops to the country.

Archer said the report notes that the international community can’t just wait for Obama to come up with a plan to deal with problems there; it must act now.

“The longevity of a plan for Afghanistan should not be contingent upon the U.S. electoral cycle and it is wrong for any actor to simply wait for President-elect Obama’s Afghan plan,” ICOS said.

NATO’s Appathurai said the Taliban insurgency has been intensifying its activities in areas where it already has been based — the south and the east, but it doesn’t hold territory in any areas where the Afghan and international forces can go.

He also said one of the problems with the report is that it conflates Taliban activity with criminal activity. He said the problems near the capital will be addressed by 3,000 or so U.S. troops to be arriving there soon.

This entry was posted in RagBlog and tagged Afghanistan, NATO, U.S. Military, War on Terror. Bookmark the permalink.

5 Responses to Winning the War on Terror: Not in Afghanistan