With Equal Parts Grace and Calamity 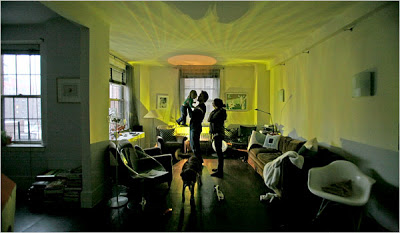 DINNER was the usual affair on Thursday night in Apartment 9F in an elegant prewar on Lower Fifth Avenue. There was shredded cabbage with fruit-scrap vinegar; mashed parsnips and yellow carrots with local butter and fresh thyme; a terrific frittata; then homemade yogurt with honey and thyme tea, eaten under the greenish flickering light cast by two beeswax candles and a fluorescent bulb.

A sour odor hovered oh-so-slightly in the air, the faint tang, not wholly unpleasant, that is the mark of the home composter. Isabella Beavan, age 2, staggered around the neo-Modern furniture — the Eames chairs, the brown velvet couch, the Lucite lamps and the steel cafe table upon which dinner was set — her silhouette greatly amplified by her organic cotton diapers in their enormous boiled-wool, snap-front cover.

A visitor avoided the bathroom because she knew she would find no toilet paper there.

Meanwhile, Joseph, the liveried elevator man who works nights in the building, drove his wood-paneled, 1920s-era vehicle up and down its chute, unconcerned that the couple in 9F had not used his services in four months. “I’ve noticed,” Joseph said later with a shrug and no further comment. (He declined to give his last name. “I’ve got enough problems,” he said.)

Welcome to Walden Pond, Fifth Avenue style. Isabella’s parents, Colin Beavan, 43, a writer of historical nonfiction, and Michelle Conlin, 39, a senior writer at Business Week, are four months into a yearlong lifestyle experiment they call No Impact. Its rules are evolving, as Mr. Beavan will tell you, but to date include eating only food (organically) grown within a 250-mile radius of Manhattan; (mostly) no shopping for anything except said food; producing no trash (except compost, see above); using no paper; and, most intriguingly, using no carbon-fueled transportation.

Mr. Beavan, who has written one book about the origins of forensic detective work and another about D-Day, said he was ready for a new subject, hoping to tread more lightly on the planet and maybe be an inspiration to others in the process.

Also, he needed a new book project and the No Impact year was the only one of four possibilities his agent thought would sell. This being 2007, Mr. Beavan is showcasing No Impact in a blog (noimpactman.com) laced with links and testimonials from New Environmentalist authorities like treehugger.com. His agent did indeed secure him a book deal, with Farrar, Straus & Giroux, and he and his family are being tailed by Laura Gabbert, a documentary filmmaker and Ms. Conlin’s best friend.

Why there may be a public appetite for the Conlin-Beavan family doings has a lot to do with the very personal, very urban face of environmentalism these days. Thoreau left home for the woods to make his point (and secure his own book deal); Mr. Beavan and Ms. Conlin and others like them aren’t budging from their bricks-and-mortar, haut-bourgeois nests.

Mr. Beavan looks to groups like the Compacters (sfcompact.blogspot.com), a collection of nonshoppers that began in San Francisco, and the 100 Mile Diet folks (100milediet.org and thetyee.ca), a Vancouver couple who spent a year eating from within 100 miles of their apartment, for tips and inspiration. But there are hundreds of other light-footed, young abstainers with a diarist urge: it is not news that this shopping-averse, carbon-footprint-reducing, city-dwelling generation likes to blog (the paperless, public diary form). They have seen “An Inconvenient Truth”; they would like to tell you how it makes them feel. If Al Gore is their Rachel Carson, blogalogs like Treehugger, grist.org and worldchanging.com are their Whole Earth catalogs.

Andrew Kirk, an environmental history professor at the University of Nevada, Las Vegas, whose new book, “Counterculture Green: The Whole Earth Catalog and American Environmentalism,” will be published by University Press of Kansas in September, is reminded of environmentalism’s last big bubble, in the 1970s, long before Ronald Reagan pulled federal funding for alternative fuel technologies (and his speechwriters made fun of the spotted owl and its liberal protectors, a deft feat of propaganda that set the movement back decades). Those were the days when Stewart Brand and his Whole Earth writers, Mr. Kirk said, “focused on a brand of environmentalism that kept people in the picture.”

“That’s the thing about this current wave of environmentalism,” he continued. “It’s not about, how do we protect some abstract pristine space? It’s what can real people do in their home or office or whatever. It’s also very urban. It’s a critical twist in the old wilderness adage: Leave only footprints, take only photographs. But how do you translate that into Manhattan?”

With equals parts grace and calamity, it appears. Washed down with a big draught of engaging palaver.

Before No Impact — this is a phrase that comes up a lot — Ms. Conlin and Mr. Beavan were living a near parody of urban professional life. Ms. Conlin, who bought this apartment in 1999 when she was still single, used the stove so infrequently (as in, never, she said) that Con Edison called to find out if it was broken. (Mr. Beavan, now the family cook, questioned whether she had yet to turn it on. Ms. Conlin ignored him.)

In this household, food was something you dialed for.

“We would wake up and call ‘the man,’ ” Ms. Conlin said, “and he would bring us two newspapers and coffee in Styrofoam cups. Sometimes we’d call two men, and get bagels from Bagel Bob’s. For lunch I’d find myself at Wendy’s, with a Dunkin’ Donuts chaser. Isabella would point to guys on bikes and cry: ‘The man! The man!’ ”

Since November, Mr. Beavan and Isabella have been hewing closely, most particularly in a dietary way, to a 19th-century life. Mr. Beavan has a single-edge razor he has learned to use (it was a gift from his father). He has also learned to cook quite tastily from a limited regional menu — right now that means lots of apples and root vegetables, stored in the unplugged freezer — hashing out compromises. Spices are out but salt is exempt, Mr. Beavan said, because homemade bread “is awful without salt; salt stops the yeast action.” Mr. Beavan is baking his own, with wheat grown locally and a sour dough “mother” fermenting stinkily in his cupboard. He is also finding good sources at the nearby Union Square Greenmarket (like Ronnybrook Farm Dairy, which sells milk in reusable glass bottles). The 250-mile rule, by the way, reflects the longest distance a farmer can drive in and out of the city in one day, Mr. Beavan said.

Read all of it here. / New York Times