With Which They Will Be Forever Tainted 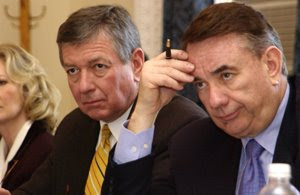 Do these men look like they’re worth $2 million a month?
Rewards For The Bush Faithful
by Christopher Brauchli / June 14, 2008

I am against government by crony.

Harold Ickes, resigning as Secretary of the Interior, February 1946

It was a longer hill to climb than the one climbed by John Ashcroft, but Tommy Thompson has reason to be happy with the rewards he received upon arriving at the summit. So do the 9/11 responders who were feeling forgotten.

John Ashcroft’s entrée into the world of private enterprise was announced in January 2008. It was then we learned of the procedure that the Justice Department adopted when dealing with corporations that in a perfect world might be charged with criminal conduct but in a Bush world are permitted to avoid prosecution. Culpable corporations enter into deferred prosecution agreements pursuant to which they are not criminally indicted but instead agree to have their conduct monitored for a set period by the Justice Department or someone hired by the Justice Department. Corporations like this arrangement since they avoid trial on criminal charges and the Justice Department likes it because it is full of Bush appointees who like corporations and know that they are run by good people, many of whom paid good money to help Mr. Bush get elected and don’t deserve to have their reputations sullied by criminal charges. The price corporations pay for not being prosecuted (which is not the same thing as a bribe) is that the corporation that is not being prosecuted pays a fine and has to also pay the cost of the monitor. Here is one example of how that worked in practice.

In 2005 the Justice Department began investigating five companies that make almost all the replacement hips and knees used in the United States. They were accused of paying kickbacks to surgeons. Criminal complaints were filed charging the companies with conspiracy to violate the anti-kickback laws One of the companies investigated was Zimmer Holdings, a medical supply company in Indiana. After completing its investigation the government agreed to defer prosecution of Zimmer in exchange for its agreeing to pay a fine of $169.5 million and agreeing to pay John Ashcroft for serving as monitor. Mr. Ashcroft was to be paid between $28 and $52 million for the 18 months of monitoring.

The latest crony to benefit from his friendship with George Bush is Tommy Thompson.

Tommy Thompson was the Health and Human Services Secretary from 2001 to 2005. During that time he was criticized for his failure to aggressively track and treat health problems arising out of the events of 9/11. Like Mr. Thompson, George Bush was criticized for refusing to adequately fund 9/11 notwithstanding repeated promises to the public and the victims of 9/11 that that was one of his first priorities. His 9/11-budget request for FY 2009 cut funding for those programs by 77 percent from what was appropriated in the FY 2008 budget. The 2008 budget appropriated $108 million and the 2009 budget $24 million. Commenting on the $24 million a White House spokesman said the reduced amount reflected Mr. Bush’s “continued commitment to World Trade Center Workers.” Hillary Clinton, by contrast, said: “With the announcement of his final budget, the President had one last opportunity to demonstrate that he would not forget the sacrifices made by those who responded to 9/11 and are now sick from the toxins released during those attacks. I am disappointed and saddened to see that the President chose not to acknowledge the clear health care needs of these heroes. ” Estimates of the cost of monitoring and treating Ground Zero workers are about $218 million a year.

The disappointment Senator Clinton expressed has been ameliorated by the great news that notwithstanding the cuts in the budget, the administration has generously handed an $11 million contract to Logistics Health, Inc. of which Mr. Thompson is president. He didn’t have it as easy as Mr. Ashcroft since three other companies were considered and there was always the outside chance cronyism would not prevail. It did.

Under the contract the company will be paid $11 million. It will give annual physicals to World Trade Center responders, diagnose and treat their illnesses and provide a pharmacy benefit to the injured workers. It’s not the many hundreds of millions that a concerned president might have provided. But it’s a little something and, best of all, it helps out yet another one of George Bush’s old friends. As his administration winds down it is safe to say that lots of his friends will find lucrative employment in the private sector. That’s the least he can do for those who have willingly worked for a man described by some as the worst president in history. There have to be rewards other than the guilt by association with which they will be forever tainted.