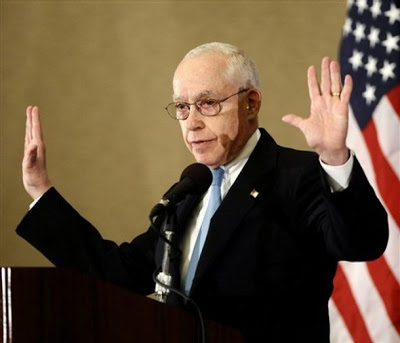 “Mukasey is asking Congress to expand and extend the war on terror forever,” said Caroline Fredrickson, Director of the ACLU Washington Legislative Office, in a media advisory. “Anyone that this president or the next one declares to be a terrorist could then be held indefinitely without a trial. This is clearly the last gasp of an administration desperate to rationalize what is a failed legal scheme that was correctly rejected four times by the Supreme Court.”

The Associated Press, acknowledging a Congress eager to transition into a busy election season, notes the rules are not likely to be approved. Mukasey’s requests comes on the heels of a Supreme Court decision granting detainees the right to challenge their captivity in US federal court. Under Mukasey’s proposals, a detainee would be able to challenge their detention, but would receive no extradition to the United States for the proceedings.

According to the Washington Post: “Under the Justice plan that Mukasey talked about today, the U.S. government could hold prisoners indefinitely so long as the armed conflict with al-Qaeda persisted.”

Senator Russ Feingold (D-WI) accused the attorney general of trying “to create an election-year security issue where there isn’t one.”

“There is simply no need to invent yet another set of legal rules to govern the detention and trial of prisoners held on national security grounds, and the rules that the attorney general is proposing are fundamentally inconsistent with the Constitution,” said Jameel Jaffer, Director of the ACLU National Security Project, in a media advisory. “The prisoners at Guantanamo, some of whom have been held without charges for more than six years, should be allowed a meaningful opportunity to challenge their detention in court. The handful of prisoners that have actually been charged with crimes should be tried under rules that conform to the Constitution and that the rest of the world will recognize as fair.”

Among the rules Mukasey is seeking:

-Barring federal courts from allowing the detainees to be brought or released into the United States. He said detainees could participate in the court hearings by video link from Guantanamo if necessary. “Many of them pose an extraordinary threat to Americans,” he said.

-Protecting counterterror intelligence gathered and used to detain the suspects from being turned over to courts.

-Prohibiting detainees charged with war crimes from challenging their capture until after they stand trial. Additionally, detainees should not be allowed to appeal their imprisonment under more than one legal standard.

-Assigning one federal court, and one judge, to oversee the detainee release cases to make sure they are heard in a coordinated effort.

“This is clearly the last gasp of an administration desperate to rationalize what is a failed legal scheme that was correctly rejected four times by the Supreme Court. With as little as five work weeks left in this Congress, there are more important issues than helping the lame-duck president cook up an indefensible plan to lock people up forever and throw away the key with no due process rights and limited judicial review.”

“The attorney general’s proposal would hide the torture and abuse conducted since 9/11,” Fredrickson said. “This is one more effort to cover up the illegal activities authorized by the president and his administration. Attorney General Mukasey might be ok with helping in a cover-up, but there is no reason to think that Congress will assist him.”