A sagacious butler helps his rich twit master Bertie and his nincompoop pals out of all kinds of ridiculous jams. 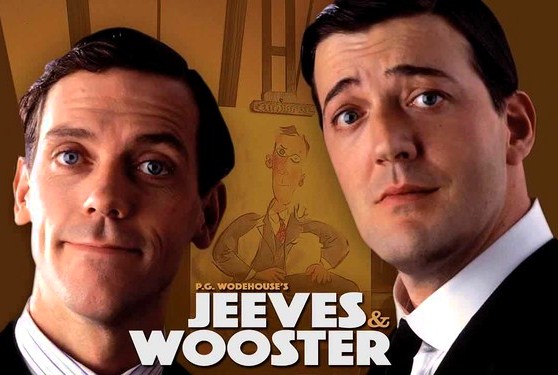 Some of the funniest and most brilliant writing and acting in decades were seen on the Jeeves and Wooster series, broadcast on PBS’s Masterpiece Theatre and available on DVD and Netflix. It consists of four priceless seasons (1990-1993) and 23 episodes, all written by Clive Exton and adapted from 19 P.G. Wodehouse novels and stories (published from 1919 to 1974). You Tube has many free episodes, including this one.

It was nominated for a “Best Drama Series” BAFTA and costumes, music, design and graphics, winning for the latter two. Of 5,581 viewers rating it at imdb.com, 95.4% gave it thumbs up and 42.6% considered it a perfect 10. It was great with all demos but slightly better with females (of all ages).

Set in the 1920s and 1930s, it starred Hugh Laurie as Bertie Wooster, an airy, nonchalant, dim-witted young gentleman and Stephen Fry as Jeeves, his calm, well-informed, and talented valet. Wooster, a bachelor, is a minor aristocrat and member of the idle rich.

He and his friends, mainly hapless wastrels belonging to The Drones Club, are extricated from all manner of societal misadventures by the indispensable valet. When Fry and Laurie began the series they were already a popular double act from writing and performing their wonderful sketch show A Bit of Fry & Laurie.

Wodehouse was a prolific author, writing 96 books in his remarkably long career (1902 to 1975). His works include novels, collections of short stories, and musical comedies. Best known today for the Jeeves and Blandings Castle novels and short stories, Wodehouse was also a playwright and lyricist who was part author and writer of 15 plays and of 250 lyrics for some 30 musical comedies, many of them produced in collaboration with Jerome Kern and Guy Bolton.

He worked with Cole Porter on the musical Anything Goes (1934), wrote the lyrics for the hit song “Bill” in Kern’s Show Boat (1927) and wrote lyrics for the Gershwin–Romberg musical Rosalie (1928). He is in the Songwriters Hall of Fame. 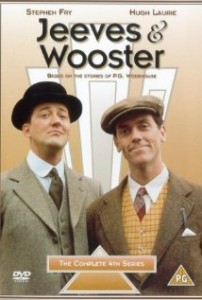 Stephen Fry is an English institution: actor, screenwriter, author, playwright, journalist, poet, comedian, television and radio presenter, film director, and political activist. He teamed up with Laurie when both were writer/performers in Cambridge Footlights.

Two of their masterful subsequent collaborations were the hilarious series Blackadder, and A Bit of Fry and Laurie. Fry has won eight major awards and received 14 other nominations, was kicked out of two schools, and was briefly imprisoned for credit card fraud.

Hugh Laurie earned two Golden Globes, two Screen Actors Guild statuettes, 10 other awards and six Emmy nominations for playing the title role in House (with a flawless American accent) from 2004 to 2012. In 2011 he was deemed the highest-paid actor in an American TV drama ($409,000 per episode) and was also the most-watched TV leading man. In 2007 he received a cherished OBE award for services to drama.

A fine cast play the various aristocratic boobs of their acquaintance. Robert Daws, who bumbles as “Tuppy,” has 47 credits, including New Tricks, Doc Martin, Midsomer Murders, Lovejoy and Outside Edge (British Comedy Awards’ Best Actor nomination). Playing “Barmy” is the great Martin Clunes, who won four major awards and 11 noms for works including Doc Martin, Shakespeare in Love. Men Behaving Badly, Reggie Perrin, The Booze Cruise and William and Mary. He is simply wonderful in all of them.

Richard Dixon, playing “Goofy,” has 58 credits, including Les Miserables and The King’s Speech. Domineering Aunt Agatha is limned by Mary Wimbush (Best Supporting Actress BAFTA nom for Oh What a Lovely War). Pip Torrens (“Bingo”) has 158 credits and seems to be in every Brit show I see, including Law & Order UK, Fleming, Yes Prime Minister, Hustle, My Week With Marilyn, Wire in the Blood, MI-5, and Rebus.

This classic series is enormous fun.