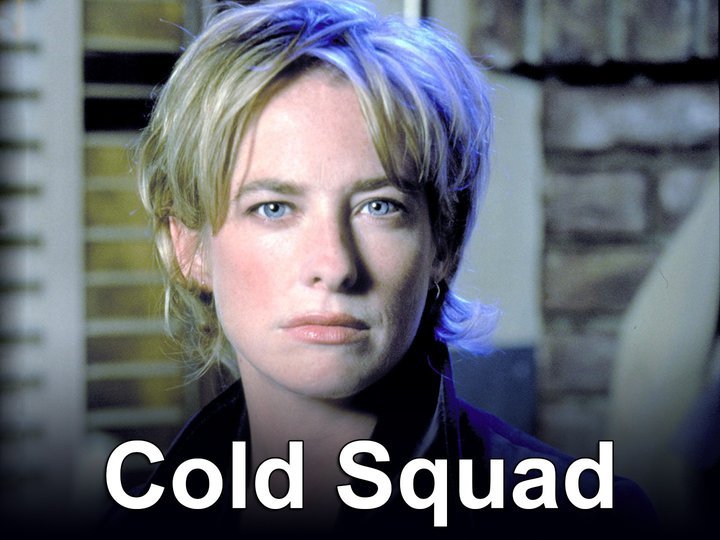 Cold Squad is a sharply written Canadian policier from Matt MacLeod (Rizzoli & Isles), Philip Keatley (The Beachcombers), Julia Keatley, and 22 other clever scribes in which old cases get reexamined and successfully solved. It’s set in crime-infested Vancouver, where other great cop series like Da Vinci’s Inquest and Intelligence are also situated.

Seven series (98 episodes) were filmed from 1998-2005 and aired on obscure U.S. TV and cable channels. Most are available for free on YouTube, including this one.

Cold Squad followed the investigations of a part of the Vancouver Police Department Homicide Division tasked with solving cold cases, led by Sergeant Ali McCormick (Julie Stewart). The cast of Cold Squad was diverse and changing, McCormick being the only character to appear in all seven seasons. Between seasons we were treated to new sets, a significant revamp of the credits and theme music, and even having McCormick’s hair change from auburn to dirty-blonde.

Over seven seasons it has received nine top Canadian awards and 51 nominations, including seven Best Dramatic Series, four Best Director, and six Best Screenwriting honors. Actress Alisen Down and actor Timothy Webber won the Canadian Leo award. Eight other performers and many other guest artists were also nominated for their work on Cold Squad, and the show was also nominated for various awards for cinematography, sound, editing, and music.

The cast is mostly decent Canadian actors we’ve never heard of. Julie Stewart was also Gemini best actress-nominated for the series North of 60, appeared in the hilarious Corner Gas, The Border, and Queer as Folk. Stephen McHattie is a “B” movie actor with 191 credits, including A Little Bit Zombie, The Covenant, Mutant X, Adam-12, and numerous Jesse Stone TV movies.

This is a good, solid series that I do recommend to you fans of procedurals.

About 15 years ago, when my wife and I were enjoying the excellent Vancouver-based, 98-episode Canadian crime series Cold Squad and Da Vinci’s Inquest, I twice saw an old friend from 30 years before in both casts, Paula Shaw. She had been in a short-lived Hollywood rock musical called Visigoths! (originally called Oh Fuck, Visigoths! but name-changed because the L.A. Times wouldn’t run ads for it with the original title).

I was assistant director, prop master, and understudy for the three ethnic actors: a 10-year-old Latino boy and two adult African-American males. One, Ted Lange (who played bartender Isaac on TV’s The Love Boat) remains a pal and still introduces me as his understudy. Before each performance of Visigoths I solicitously asked about his health, because if he couldn’t go on I would have had to “black up” to play Leroy the Black Militant, and the audience would have torn me limb from limb.

Anyway, the show flopped after 12 previews and an opening night, the producer took the money and ran, and the cast members were all locked out of the theatre with their belongings still inside. I, age 24, knowing that there was an obscure entrance to the Ivar Theater at the stage bar next door, sneaked in and unlocked the theatre, allowing everyone to rescue their makeup. Huzzah!

On another occasion, when I was 23 and teaching junior high school in the Bronx, there was a racist 10-week teachers’ strike, and I was one of 16 scab teachers who crossed the angry picket line each morning to teach. One day the janitors locked us out of the school, but I found an unlocked back window, sneaked through it (in obligatory suit and tie) and opened the front doors so that “freedom school” could recommence.