Posted on September 2, 2018 by Thorne Dreyer 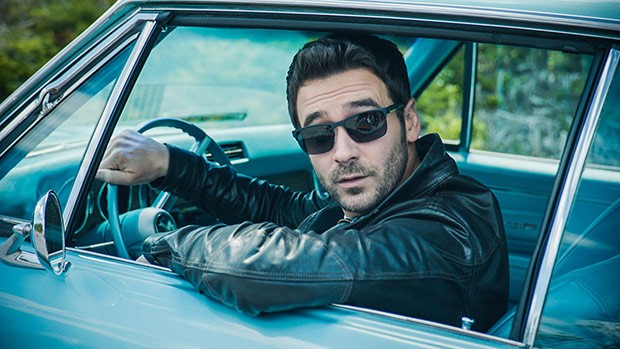 Jake Doyle is played by Allan Hawco, who was the co-creator of the series and who co-scripted many episodes.

[In his Rag Blog column, Alan Waldman reviews some of his favorite films and TV series that readers may have missed, including TV dramas, mysteries, and comedies from Canada, England, Ireland, Australia, New Zealand and Scotland. Most are available on DVD, Amazon Prime, and/or Netflix, and some episodes are on YouTube.]

77 Episodes (six seasons) of this fun, fast, funny thriller series aired on the CW network from 2011-2016. In it, father and son private investigators take on a range of dangerous cases in very colorful St. John’s, the capital of Newfoundland and Labrador — Canada’s easternmost province.

The son, handsome Jake Doyle, is played by Allan Hawco, the show runner who co-created the series and co-scripted many episodes. He has two Gemini Award nominations for this role, and his 26 other credits include Murdoch Mysteries, Love & Savagery (ACTRA best actor nom), and Frontier.

86.5% of 2,500 Internet Movie Database viewers gave it thumbs-up, 32.9% rated it a perfect 10, and it was a hit with all demographics, especially women 45 and older. This is the 30th most popular Canadian series ever, and the Season 2 pilot drew more than a million viewers (in a country of 35 million people). The series is watched in Estonia, Serbia, Bulgaria, Brazil, Australia, South Africa, Poland, Germany, the U.K., the Netherlands, Canada, and the U.S.

The Doyles — assisted by Malachy’s second wife Rose, Jake’s niece Tinny, her boyfriend Des, and a cop/girlfriend Leslie — serve all kinds of clients and get into a wide range of scrapes. Other figures from their lives — Jake’s brother and sister, Tinny’s criminal secret father, Des’s criminal dad, Jake’s and Rose’s exes — pop up from time to time.

The Doyles take on all kinds of cases: kidnappings, assorted thefts, murder accusations, suspected infidelities, arson and worse. Jake is constantly getting beaten up, but then he gets to make out with many attractive women. He drives a classic ’68 Pontiac GTO, and then after it is destroyed he drives an older, beaten up one. The series is full of Newfoundland slang. For instance, everyone is constantly called “boy,” including girls.

The show is quite witty, and for an action drama, it moves briskly. I have watched four seasons of the six on Netflix so far. Here is an episode on YouTube.