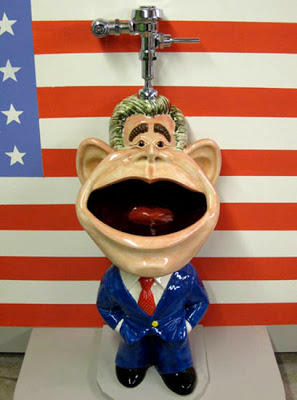 No matter who you are pulling for in this election, the popularity polls indicate that the vast majority of Americans are ready to see Bush pack up his things and get the hell out of the White House. While there is tons of anti-Bush paraphernalia out there, few things capture our disdain as well as “George W. Flush” — a design by famed urinal sculptor Clark Sorensen.

Unfortunately, this urinal is one of a kind, but it will be on display at his one-man show entitled “Down The Drain – The Legacy of George W. Bush.” at Ruby’s Clay Studio and Gallery in San Francisco. The show runs from January 17 to February 16, 2009. Hopefully, visitors will be allowed to relieve themselves in it. Let’s be honest—it would be satisfying on multiple levels.