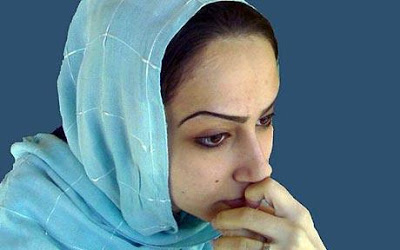 Delara Darabi made a tearful call early on Friday to her parents. Photo from Amnesty International.

Iran Executes Woman for Alleged Murder Committed as a Juvenile

Delara Darabi knew the end was close when she made a panic-filled call to her mother from prison to say that she could see the hangman’s noose from her window.

The Iranian artist was executed on Friday for a murder allegedly committed when she was a juvenile and for which she retracted her brief confession, claiming she was covering up for her boyfriend.

The prison authorities hanged Miss Darabi, 23, even though the head of Iran’s judiciary granted her a two-month stay of execution on April 19 amid international outrage over her case. They also did not give her lawyer the required 48 hours notice.

Horrific new details have emerged of her last desperate plea for help from Rasht prison as jail guards came to lead her away.

The execution of a young woman whose case has become an international cause célèbre is a further damaging blow to President Barack Obama’s attempts to thaw US relations with the Islamic regime. Roxana Saberi, an American-Iranian journalist, is on hunger strike in a Tehran prison after being convicted of espionage in a show trial last month.

Miss Darabi’s case gained widespread attention after moving paintings and drawings that she made in her prison cell were shown around the world. She developed her talent as a painter behind bars.

Iran, Saudi Arabia and Yemen are the only countries to execute people for crimes committed when they are under 18. Miss Darabi was 17 when she admitted killing her 58-year-old uncle in a burglary in 2003 but she quickly retracted the confession, saying she had taken the blame to save her boyfriend.

Amnesty International, the human rights group that campaigned vigorously to save Miss Darabi, led the condemnation.

“Amnesty International is outraged at the execution and particularly at the news that her lawyer was not informed,” said Hassiba Hadj Sahraoui, deputy chief for the Middle East and North Africa.

“This appears to have been a cynical move on the part of the authorities to avoid domestic and international protests which might have saved Delara Darabi’s life.

“This indicates that even decisions by the Head of the Judiciary carry no weight and are disregarded in the provinces.”

The Iranian authorities said that Miss Darabi confessed to the murder because she believed she would be pardoned as the crime was committed when she was a minor. But her lawyer said that new forensic evidence and the explanation for her confession cleared her, but the court declined to hear the testimony.

“Amnesty International does not consider her trial to have been fair, as the courts later refused to consider new evidence which the lawyer said would have proved she could not have committed the murder,” Mr Sahraoui added.

Iran has executed at least 42 juvenile criminals since 1990, including seven in 2007, according to human rights groups. Iran says it only carries out the death penalty when a prisoner reaches the age of 18.

Iran’s existing penal code holds a nine-year-old girl and a 15-year-old boy to be legally responsible if involved in crime.

Iran stepped up its use of the death penalty last year in what it says is a bid to improve security in society.