Barack Obama : So Soon the Assassin 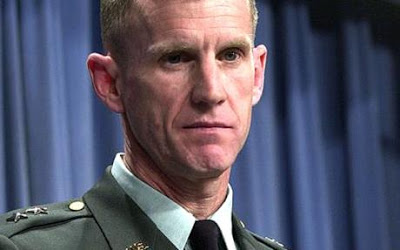 Obama’s choice: Gen. Stanley MacChrystal, America’s new army chief in Afghanistan. His expertise is in assassination and “decapitation.” Photo by Getty Images.
How Long Does It Take?

As far back as President Woodrow Wilson in the early twentieth century, American liberalism has been swift to flex imperial muscle, to whistle up the Marines.

How long does it take a mild-mannered, antiwar, black professor of constitutional law, trained as a community organizer on the South Side of Chicago, to become an enthusiastic sponsor of targeted assassinations, “decapitation” strategies and remote-control bombing of mud houses the far end of the globe?

There’s nothing surprising here. As far back as President Woodrow Wilson in the early twentieth century, American liberalism has been swift to flex imperial muscle, to whistle up the Marines. High explosive has always been in the hormone shot.

The nearest parallel to Obama in eager deference to the bloodthirsty counsels of his counter-insurgency advisors is John F. Kennedy. It is not surprising that bright young presidents relish quick-fix, “outside the box” scenarios for victory.

Whether in Vietnam or Afghanistan the counsels of regular Army generals tends to be drear and unappetizing: vast, costly deployments of troops by the hundreds of thousand, mounting casualties, uncertain prospects for any long-term success — all adding up to dismaying political costs on the home front.

Amid Camelot’s dawn in 1961, Kennedy swiftly bent an ear to the counsels of men like Ed Lansdale, a special ops man who wore rakishly the halo of victory over the Communist guerillas in the Philippines and who promised results in Vietnam.

By the time he himself had become the victim of Lee Harvey Oswald’s “decapitation” strategy, brought to successful conclusion in Dealey Plaza, Dallas, on Nov. 22, 1963, Kennedy had set in motion the counter-insurgency operations, complete with programs of assassination and torture, that turned South-East Asia and Latin America into charnel houses, some of them, like Colombia, to this day.

Another Democrat who strode into the White House with the word “peace” springing from his lips was Jimmy Carter. It was he who first decreed that “freedom” and the war of terror required a $3.5 billion investment in a secret CIA-led war in Afghanistan, plus the deployment of Argentinian torturers to advise US military teams in counter-insurgency ops in El Salvador and Nicaragua.

(Though no US president can spend more than a few moments in the Oval Office scanning his in-tray the morning after the inaugural ceremonies without okaying the spilling of blood somewhere on the planet, it has to be said that Bill Clinton did display some momentary distaste before settling comfortably into the killer’s role. “Do we have to do this?” he muttered, as his national security team said that imperial dignity required cruise missile bombardment of Baghdad in 1993 in retaliation for a foiled attack on former President G.H.W. Bush, during a visit to Kuwait. The misisiles landed in a suburb, one of them killing the artist Laila al-Attar.)

Obama campaigned on a pledge to “decapitate” al-Qaida, meaning the assassination of its leaders. It was his short-hand way of advertising that he had the right stuff. And, like Kennedy, he’s summoning the exponents of unconventional, short-cut paths to success in that mission. Lt. Gen. Stanley A. McChrystal now replaces General David McKiernan as Commander of US Forces in Afghanistan. McChrystal’s expertise is precisely in assassination and “decapitation.” As commander of the military’s Joint Special Operations Command (JSOC) for nearly five years starting in 2003, McChrystal was in charge of death squad ops, with its best advertised success being the killing of Abu Musab al-Zarqawi, head of al-Qaida in Iraq.

The phrase “sophisticated networks” tends to crop up in assessments of McChrystal’s Iraq years. Actually there’s nothing fresh or sophisticated in what he did. Programs of targeted assassination aren’t new in counter-insurgency. The most infamous and best known was the Phoenix Program in Vietnam, designed to identify and eliminate cadres of Vietnam’s “National Liberation Front”, informally known as the Viet Cong of whom, on some estimates, at least 40,000 were duly assassinated.

In such enterprises two outcomes are inevitable. Identification of the human targets requires either voluntary informants or captives. In the latter instance kidnapping (ie extrajudicial seizure of “enemy combatants”) and then torture are certain, whatever rhetorical pledges are proclaimed back home. There may be intelligence officers who will rely on patient, non-violent interrogation, as the US officer, Major Matthew Alexander, who elicited the whereabouts of al-Zarquawi told Patrick Cockburn that he did. There will be others, US personnel who will either personally reach for the garden hose and the face towel, or delegate the task to the local talent.

It has been thus, without remit, through the entire course of Empire. Not so long ago CounterPuncher Prof. Bruce Jackson of SUNY, Buffalo, sent us an illustration from the May 22, 1902 issue of the original (pre-Luce) Life. The only military action the US had going at the time was in the Philippines, where Pershing was fighting the Moros — Muslims who wanted independence from US rule. A pipe-smoking GI pours water into a funnel held in the mouth of a barefoot prisoner by another GI, who sits on the prisoner’s genitals and points a pistol at his throat.

McChrystal, not coincidentally, was involved in the prisoner abuse scandal at Baghdad’s Camp Nama. (He also played a sordid role in the cover-up in the friendly-fire death of ex-NFL star and Army Ranger Pat Tillman.)

Whatever the technique, a second certainty is the killing of large numbers of civilians in the final “targeted assassination.” At one point in the first war on Saddam in the early 1990s, a huge component of US air sorties was devoted each day to bombing places where US intelligence had concluded Saddam might be hiding. Time after time, after the mangled bodies of men, women and children had been scrutinized, came the crestfallen tidings that Saddam was not among them.

Already in Afghanistan public opinion has been inflamed by the weekly bulletins of deadly bombardments either by drones or manned bombers. Still in the headlines is the US bombardment of Bola Boluk in Farah province, which yielded 140 dead villagers torn apart by high explosive including 93 children. Only 22 were male and over 18. Perhaps “sophisticated intelligence” had identified one of these as an al-Qaida man, or a Taliban captain, or maybe someone an Afghan informant to the US military just didn’t care for. Maybe electronic eavesdropping simply screwed up the coordinates. If we ever know, it won’t be for a very long time. Obama has managed a terse apology, even as he installs McChrystal, thus ensuring more of the same.

The logic of targeted assassinations was on display in Gaza even as Obama worked on the uplifting phrases of his Inaugural Address. The Israelis claimed they were targeting only Hamas even as the body counts of women and children methodically refuted these claims and finally extorted from Obama a terse phrase of regret.

He may soon weary of uttering them. His course is set and his presidency already permanently stained the ever-familiar blood-red tint. There’s no short-cut, no “nicer path” in counter-insurgency and the policing of Empire. A targeted bombing yields up Bola Boluk, and the incandescent enmity of most Afghans. The war on al Qaida mutates into war on the Taliban, and 850,000 refugees in the Swat Valley in Pakistan.

The mild-mannered professor is bidding to be as sure-footed as Bush and Cheney in trampling on constitutional rights. He’s now backing into pledges to shut down the kangaroo courts (“military commissions”) by which means the US have held prisoners at Guantanamo who’ve never even been formally charged with a crime! He’s threatening to hold some prisoners indefinitely in the U.S. without trial. He’s been awarded a hearty editorial clap on the back from the Wall Street Journal:

“Mr. Obama deserves credit for accepting that civilians courts are largely unsuited for the realities of the war on terror. He has now decided to preserve a tribunal process that will be identical in every material way to the one favored by Dick Cheney.”

It didn’t take long. But it’s what we’ve got –- for the rest of Obama-time.

1 Response to Barack Obama : So Soon the Assassin