Because I Hate Patriotic Bullshit and Because I Love Revolution

Ok, I admit it. I’m not your usual observer. When I heard that Budweiser had been bought by the Euro-capitalists InBev, I was not concerned.

I don’t care who owns the factories in the U.S. I don’t worry the U.S. heartland is being infiltrated by foreign interests. And certainly, I don’t consider Budweiser a national treasure. The truth is that it’s almost undrinkable.

But my ears perked up when I read how Budweiser’s maker, Anheuser-Bush had roots in St. Louis that went back before the Civil War. Ah, my friends, THERE is a story worth telling. And I’m going to sit back in the damp heat of this Chicago evening, sip on a couple of Fat Tires, and tell it to you, just because I hate patriotic bullshit and because I love revolution.

First, there is nothing American about beer making in St. Louis.

St. Louis in the 1850s was a raw river town situated where the Missouri River and the broad Mississippi met. It was a frontier town in many ways and the jumping off point. It was the “end of the line” for civilization. But it was also one of the first American industrial cities, with one of the heaviest concentration of of factory workers in the country. And these workers were not native-born Americans.

A great many of them came straight from Germany — and formed part of a very large German speaking population that then dominated both the urban and rural landscape from St. Louis to Chicago, to Cincinnati and far into the farmlands of Pennsylvania. And these immigrant workers were a very rowdy and radical bunch. Many were veterans of Europe’s great revolutionary battles of 1848 — the first upheavals when working class and communist revolution emerged as a living threat to the world’s ruling classes.

And, at the same time, surrounding this heavily leftwing, working-class, German-speaking city was a countryside filled with some of the most ugly, racist, pro-slavery forces in the U.S. The Missouri River stretched west from St. Louis, and its shores were lined with slave plantations producing raw materials for twine — a product that shipped downriver to bind the cotton bales of the Mississippi Delta.

The slave owners of Missouri were quite militant. They produced the political gangs called “border ruffians” who crossed the western Missouri border into nearby Kansas territory, where they engaged in armed struggle with abolitionists like John Brown over whether Bloody Kansas would be a slave state or free.

So you can imagine that there was a tension growing through the 1850s between the pro-slavery farmers of the Missouri floodplains and the anti-slavery and often communist workers of St. Louis.

There was a parallel, and little known cultural clash going on at the same time: the German workers arrived as beer drinkers and quite a few of them were first class brewers. There were some Irish among the workers, and they too were fans of the Germans’ sudsy “liquid bread.”

Before long St. Louis was peppered with huge German beer halls, where the often lonely immigrants found community and a feeling of home. For reasons I haven’t yet uncovered, the reactionary political forces of Missouri territory were anti-beer. Maybe they didn’t want this foreign culture to take root. Perhaps they had some early religious prohibitionist logic. But in any case, there was an early political clash when a major push was made to ban beer in St. Louis, and (needless to say) the German workers pushed back.

Here is an irony worth thinking about: In the Mississippi river valley, this important historical clash started between beer lovers and hemp growers. And, believe it or not, revolutionary sympathies go with the beer drinkers.

At a time when social organization among immigrants was primitive, the fight over beer helped spur a sense of common identity among the workers, and gave rise to a number of political newspapers. And the movement that emerged from these circles were increasingly active in the fight over slavery. I have on my bookshelf a rare little book that gathers articles and histories from these German immigrant newspapers — and it is clear how they started to articulate deeply revolutionary views that spoke for a highly conscious and engaged working class population.

You may have studied the civil war a little… I know I have always been fascinated by this first, truly revolutionary war on U.S. soil. And one thing to keep in mind was that the so-called “border states” were a key battle ground as the civil war broke out. There was a strip of these states (from Maryland through West Virginia, Kentucky, to Missouri) that had sizable populations of slave owners and slaves but a general political mood that was divided over the issues of secession and war.

And in this fight over the border states, Maryland had a particular importance because it surrounded the Union capital, so that if it joined the slavery confederation, Washington DC would be harder to defend. And the mood was so bad that Abraham Lincoln was almost killed in Baltimore as he traveled from Illinois to DC to assume the presidency. At the other end of the country, St. Louis has a major strategic importance for the war: It was the major anti-slavery center on the Mississippi. (The next river city, Memphis, was a creature of the Mississippi Delta. It was one of the urban nerve centers of the slave empire — filled with slave markets and holding pens.)

And so, as war broke out, all sides prepared to seize St. Louis by force. And if it had fallen to the slavocracy, it would have been quite hard for the Union’s armies to gain a foothold on the Mississippi, and it would have been that much harder to defeat the South.

On the surface, the politics of St. Louis did not look promising. After 1860, the new governor Claiborne Fox Jackson was clearly a pro-slavery diehard, and the bastard was scheming to secede from the Union and pull the state into slavery’s confederacy.

Step by step the tensions mounted, and started to go from political to military preparations. One focus of preparations was the state armory, the largest warehouse of weapons on the frontier. Whoever controlled those guns would be better able to crush their enemies.

Here again beer enters the story. Because the German workers started to prepare for battle. Led by veterans of the 1848 Revolutions, they started to secretly train themselves in discipline and military tactics. Their plan: to rise up against the state government in armed insurrection, to seize the armory, and defeat the governor’s army.

Where did they do their drills? In the cavernous beer halls of St. Louis. At a given time, they would gather. The doors would be sealed and put under vigilant guard. The tables would be cleared away. And cartloads of sawdust would be scattered deep on the beerhall floors.

And with the sawdust muffling the tramp, tramp, tramp of their feet, the workers prepared themselves for war — learning the unit movements so central to the warfare of that day. Outside, on the streets, the many spies of the governor could not hear what was going on within. 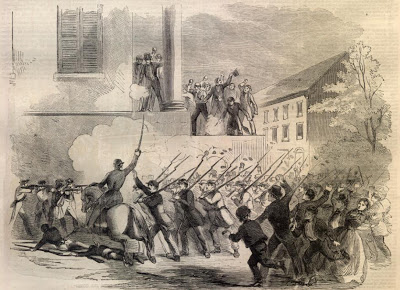 I won’t go into great detail about the heroic and fascinating ways that violence erupted. Led by fearless army officer Nathaniel Lyons the anti-slavery forces struck, and struck hard. They seized St. Louis and the armory. And they shattered the schemes of the slave owners. They routed the Governor’s troops in the early battles. And they bottled up the slaveowners of the Missouri River — cutting them off from the Confederacy.

What followed was one of the most bitter civil wars I have ever studied: Missouri was criss-crossed by vicious pro-slavery death squads that carried out horrific murders and mutilations. Their raiders came dressed in a cloud of human scalps sewn into their clothes and bridles — as they spread terror among those who opposed the sale of human beings. If you have ever wondered where the frontier killer Jesse James got trained, it was as a triggerman for one of the most notorious death squads of the slavocracy.

Hemp made its appearance here too, right in the midst of the fighting: in several key battles the Confederate forces build protective breast works out of the hemp bales pulled from their slave plantations, piling up the bundled hemp harvest to protect themselves from Union bullets.

Fighting against the slavocrats were a complex array of forces, and at their core were new Union army units led by radical Republican John Charles Fremont, recruited heavily from among the German workers of St. Louis. The first known actions of communists in the U.S. was the revolutionary armed struggle of these largely German-speaking forces, led in part by Colonel Joseph Weydemeyer, an energetic communist co-thinker of Karl Marx.

These units militantly emancipated many slaves that fell into their hands. This was in direct contradiction with the policy of President Lincoln who, afraid to offend the leading forces of other border states, insisted in the early days of the civil war that slaves should not be freed, but should be treated as “contraband property.” In this dispute, Fremont was removed from the command of the Missouri armies, and these revolutionary working class forces were dispersed into larger armies in order to better control them.

There are, in my opinion, many lessons and insights within this story. And more in the parts I have left untold.

But I tell this story now just to make a single point:

Anyone who thinks that Budweiser and the beer industry of St. Louis is a story of patriotism, Americanism, of all-American “national treasures,” of a whiteman’s “heartland” of traditional values and conservative xenophobia… Anyone who runs that story just doesn’t know.

The story of beer in St. Louis is a story of communist immigrant workers who didn’t speak English, who hated the mistreatment of kidnapped Africans in the United States, who had little love for America’s institutions, and who were willing to die (and kill!) to end the horrific practices of human slavery.

Deal with it. Pass it on.

Mike Ely is part of the Kasama Project and has helped create the new Revolution in South Asia resource. Mike’s email is m1keely@yahoo.com.

This entry was posted in RagBlog and tagged American History, Civil Disobedience, Slavery. Bookmark the permalink.