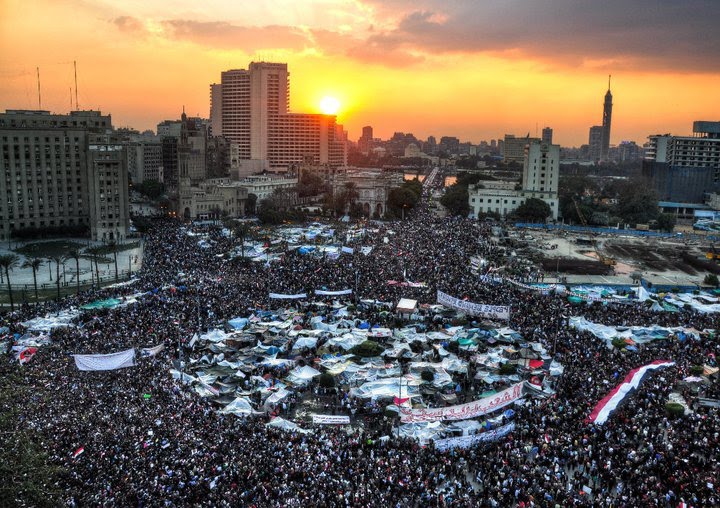 According to James Gelvin’s 2012 book, The Arab Uprising: What Everyone Needs To Know, in Egypt “youths between 15 and 29 make up…30 percent” of the population and “youth unemployment in Egypt is 43 percent.” The same book also noted:

The statistics on employment do not include those who have given up finding work (the “discouraged unemployed”) and those who work part-time… In Egypt…almost 60 percent of the youth between 18 to 29 are out of the labor force (in the case of women it is 83 percent)… In Egypt young people with college degrees rank highest among the unemployed of any sector of youth.

Yet while large numbers of young people in Egypt were still impoverished, working long hours for low wages, or were unemployed — whether or not they possessed college degrees — by early 2011, a small group of wealthy Egyptian businessmen, “known as `whales of the Nile’” now lived “in gated communities on the edge of the desert, thus avoiding daily contact with the inhabitants of Cairo’s slums,” according to The Arab Uprising.

So, not surprisingly, after mass street protests in support of democratization and economic justice in Tunisia led to a change of leadership in that country, large numbers of unemployed Egyptian young people — including many with college degrees — joined mass street protests in Egypt for democratization and economic justice in Egyptian society near the end of January in 2011. As The Arab Uprising observed:

Many of those who planned the Jan. 25 [2011] protests and mobilized others for them were young and technology-savvy… Like protesters in Tunisia, those in Egypt linked demands for political rights with economic justice and thus linked youths and labor activists in a common cause.

After several groups of politically dissident activists called for street protests on January 25, the same book recalled what happened in Cairo that day:

In Cairo, the police stopped most…demonstrators before they could converge on Tahrir Square… But because the police were so scattered, they were unable to stop one group that had rallied in a working-class neighborhood. By the time that group had reached the square, its ranks had swelled to thousands. Others joined the protesters until they marched to Tahrir Square or at the square, until they numbered an estimated 10,000… Toward evening the police moved in and, after skirmishing with the protesters, fired tear gas and cleared most from the square.

According to the Al Jazeera website’s timeline, the January 25 date had previously been the “national holiday to commemorate the police forces,” but January 25, 2011, was announced as a “day of rage” by the demonstrators in downtown Cairo who, on that day, marched “towards the offices of the ruling National Democratic Party” of the Mubarak regime, “as well as the foreign ministry and the state television” offices, while chanting “Down with Mubarak!”

On the January 25 “day of rage” in Egypt, there were “demonstrations in 12 of Egypt’s 27 provinces and in most of the principal cities of the country;” and in Alexandria “police reportedly killed 3 protesters” according to The Arab Uprising. In addition, in Alexandria “the residents of some of the poorest neighborhoods joined the protests” and “in Mahalla al-Kubra, the site of the Egypt Spinning and Weaving Plant — the largest manufacturing plant in the Middle East — workers dominated the protests,” according to the same book.

On the following day, January 26, people continued to protest on the streets of Cairo and another protester was killed, according to the Al Jazeera website’s timeline. In Suez — where there had also been some skirmishing between Egyptian police and protesters on January 25 — police and protesters clashed again and 55 protesters were injured, according to the Egyptian medical personnel cited by the Al Jazeera website’s timeline.

And there were more street protests again in Cairo, Suez, Ismalia, Alexandria, and Toukhs on January 27, 2011, despite the disruption of Facebook, Twitter, and Blackberry services by Mubarak regime authorities.

But, according to The Arab Uprising, “the events of Jan. 28 [2011] might be seen as the beginning of the end for the Mubarak regime” in Egypt. As the same book recalled:

Mubarak remained defiant: the government brought in goons on horseback and camelback in an unsuccessful attempt to dislodge the protesters from Tahrir Square, for example, and up until he announced his resignation Mubarak vowed to remain in office… The [Egyptian] army’s announcement soon after taking control of the streets that it would not fire on the protesters ultimately tipped the balance… Tens of thousands of Egyptian workers went on strike demanding wage increases and Mubarak’s resignation…

Although apparently no  protesters were killed in Cairo on January 28, 2011, despite the goon attack on the Tahrir Square demonstration, 11 civilians were killed in Suez and 1,030 people were injured throughout Egypt on the same day; and despite the presence of Egyptian army troops on the streets in Cairo and Suez and Alexandria, street protests continued during the night of January 28.

Then, on January 29, “thousands of anti-government protesters in Cairo’s Tahrir Square” stood their ground “despite troops firing into the air in a bid to disperse them” and “thousands of protesters” remained there on January 30, according to the Al Jazeera website’s timeline.

The same timeline also noted that on January 31, “250,000 people” gathered in Tahrir Square, “hundreds” marched through Alexandria, anti-government political groups called for “a `million man march’ and a general strike on” February 1 “to commemorate one week since the protests began,” the Egyptian military pledged not “to hurt protesters,” and “worldwide investors” continued “withdrawing significant capital from Egypt amid rising unrest.”

A million Egyptians then demonstrated in Cairo’s Tahrir Square on February 1, while thousands of Egyptian protesters marched in Alexandria and Suez on that same day; and on February 2, three people were killed and 1,500 people were  injured after the Egyptian “military allowed thousands of pro-Mubarak supporters, armed with sticks and knives, to enter” the square, according to the Al Jazeera website’s timeline.

And five more people were apparently killed and several more people apparently wounded on February 3, 2011, from “bursts of heavy gunfire…aimed at anti-government demonstrators in Tahrir [Liberation] Square” which began “at around 4am local time (02:00GMT) and” continued “for more than an hour,” according to the same timeline.

Then, on February 10, 2011, “tens of thousands of” Egyptian “workers from both the public and private sectors, including those from the petroleum, railroad, banking, retail, and heavy industry sectors, struck…and joined protesters on the streets of most major cities,” “in the textile industry, 18,000 workers left their jobs,” and “walkouts shut down the Cairo airport and stock exchange,” according to The Arab Uprising.

And on February 11, “masses of protesters…descended on the state television building in Cairo and the presidential palace in Heliopolis, as well as in Tahrir Square,” according to the Al Jazeera website.

So, as The Arab Uprising recalled, “having decided that the army would not fire on the protesters, the [Egyptian] Supreme Council of the Armed Forces [SCAF] staged a coup d’etat,” “deposed Mubarak” and “took over the government” on the evening of February 11. The final total number of people in Egypt who lost their lives in street protests between January 25, 2011 and the deposing of Mubarak on February 11, 2011 was estimated to be between 360 and 900.