Boeing’s Streak of Greediness and Arrogance 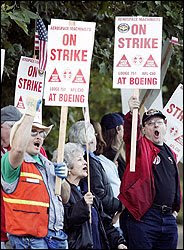 Ask Not What Your Company Can Do For You … The Boeing Strike
By David Macaray / September 15, 2008

There’s an axiom in labor relations: When business is suffering, management will approach the workers and ask them to make the necessary sacrifices.

When the market tightens up, or a recession hits, or when the chickens of woefully short-sighted management decisions come home to roost, the company will approach the union and plead with them to forego wage increases, renegotiate their pension plan, pay more for health insurance coverage, and, basically, do “more with less” all the way down the line. Having no real choice in the matter, the union reluctantly agrees.

A corollary to that axiom: When business is once again flourishing, management will forget that any sacrifices have been made.

When things are rosy—when the company is wallowing in money and six-figure executive bonuses are being passed out like donuts—and the union approaches the company, reminds them of the sacrifices (the give-backs, the trade-offs, the extra burdens), and asks for a larger, more proportional slice of the pie, management will refuse.

They will close ranks. They will recite phrases like “maintaining a competitive edge” and “being responsible to the stockholders.” They will pretend they never heard of you. Call it ingratitude, call it playing hardball, call it an example of capitalism in its purest form; but whatever you call it, it’s a corollary to an axiom in labor relations.

At one minute after midnight on September 5, 27,000 machinists working at Boeing Corporation plants in Oregon, Washington and Kansas, and represented by the IAM (International Association of Machinists), went on strike. This followed many weeks of acrimonious negotiations between the two sides, and was IAM’s second strike against the mammoth airplane manufacturer in three years. The last one occurred in 2005 and lasted 28 days.

Even with Boeing virtually awash in extra money—with employee productivity and company profits at record highs, and a huge backlog of lucrative orders for its state-of-the-art Dreamliner 787 jet airplane pointing to nothing if not a bright future—the company, nonetheless, attempted to low-ball the union.

Besides coming in cheap, Boeing arrogantly attempted to circumvent the traditional bargaining process by e-mailing a copy of their final offer directly to every union member affected, hoping that the rank-and-file would, in the privacy of their own computer screens, be persuaded to accept the very contract their leadership had urged them to reject.

But Boeing’s attempt to outflank the union negotiators backfired. The membership called the company’s bluff. By a vote of 87%, they rejected what Boeing had called its “last, best and final” offer, and by a mandate of 80%, voted to strike. Under IAM bylaws, a two-thirds majority is required for a strike.

A couple of things about the walkout are worth noting. First, the IAM membership showed itself to be more militant, aroused and hip to what was really happening than the IAM bargaining team was, a circumstance exceedingly rare in union circles. Usually, it’s the other way around—usually it’s the bargaining team that has to whip a twitchy membership into shape, get them in a rebellious enough mood to hit the bricks.

In this case, however, IAM members were already champing at the bit. In fact, after their overwhelming rejection of the company offer, the membership was furious, outraged, that the bargaining team didn’t immediately call a strike. Instead, in a conciliatory, last ditch effort to avoid a shutdown, the union negotiators gave the company 48 hours to improve their “final” offer, a good faith gesture that ultimately failed.

Basically, there are two types of strike votes. There’s the largely “symbolic” kind, taken well in advance of the company’s final offer, where the union bargaining team goes to the membership and asks them to give the negotiators strike authorization, which they use more or less as leverage.

And then there’s the “grown-up” kind—the scary kind, the kind the IAM conducted—where the membership’s rejection of the final offer is understood to be a prelude to actually shutting down the operation.

The second thing worth noting is that in 2005, when Boeing took its last strike, BusinessWeek magazine (not exactly a repository of pro-union sentiment) reported that Wall Street had roundly criticized the company’s decision to stonewall. The magazine suggested that Boeing had been too stubborn and greedy to see the wisdom in settling the contract for a few dollars more than they intended to pay, rather than taking what turned out to be a money-losing, debilitating strike.

Three years later, that same streak of greediness and arrogance seems to be alive and well. Despite the fact that Boeing’s business is flourishing and its future appears unambiguously bright, the company took a defiant stand, drawing a line in the sand and practically daring the workers to cross it.

And what was the outcome of that defiant posture? Not only are 27,000 workers now on strike, and the two sides engaged in a lively pissing match, but, according to industry insiders, as orders for Boeing’s jetliners continue to pile up and production remains at a standstill, the company is losing more than $100 million a day—a staggering loss, and one that didn’t need to happen.

[David Macaray, a playwright and writer in Los Angeles, was a former labor union rep. He can be reached at dmacaray@earthlink.net.]

This entry was posted in RagBlog and tagged Capitalism, Labor, Labor Unions. Bookmark the permalink.