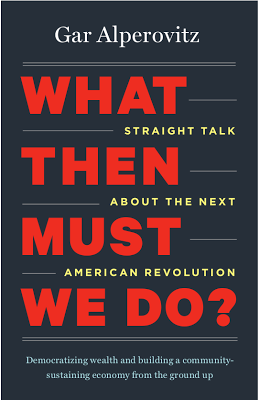 What Then Must We Do?:
Political economist Gar Alperovitz
and visions of a new world

The struggle for structural reforms is essential to changing the ‘common sense’ of the U.S. political arena. But it is not enough to wound the rabid beast; one must ultimately bring it down.

Gar Alperovitz, author of What Then Must We Do?, will be Thorne Dreyer’s guest on Rag Radio, Friday, May 17, 2013, from 2-3 p.m. (CDT) on KOOP 91.7-FM in Austin, and streamed live to the world. They will be joined by Rag Blog economics writer Roger Baker. The show will be rebroadcast by WFTE-FM in Mt. Cobb and Scranton, PA, Sunday morning, May 5, at 10 a.m. (EDT), and the podcast will be posted at the Internet Archive.

I read Gar Alperovitz’s What Then Must We Do?: Straight Talk About the Next American Revolution with a level of skepticism. He set out to make an argument as to what can be done right now to demonstrate to a growing population weary of neoliberal capitalism that another world is not only necessary and possible, but that one can already see the first glimmers of that new world.

Alperovitz’s views are shaped by several assumptions. First, that actually existing capitalism is not working. Second, that socialism, as we have known it in the 20th century did not work. Third, that people need to actually see what an alternative world would look like in order to be encouraged to fight for one.

He then proceeds to identify actual examples of different struggles and projects that have been undertaken by progressives that show that a different way of organizing life and the economy is not only a great idea, but living realitiy.

Alperovitz spends little time critiquing 20th century socialism. For the most part he is interested in demonstrating that capitalist dogma, in particular neoliberal capitalist dogma, is both a myth as well as fundamentally unworkable. He suggests that there are projects that can be undertaken — like worker cooperatives — that will build power for the everyday person and actually move towards social transformation.

Advocating for these institutions, Alperovitz helps the reader to understand the differences that exist under the rubric of worker ownership, showing that there are forms of alleged ownership that really do not amount to control while at the same time there are processes that can be undertaken that alter workplace dynamics as well as the relationship of an enterprise to the broader community.

Alperovitz links his proposed process with what he sees as the next American Revolution. In that sense he believes that it is critically important that new transformative change in the United States must be rooted in lived reality in the country and also viewed by the public as “American.” For that reason, demonstrating to the “99%” that alternatives are underway and that they are not the creatures of foreign ideologies and foreign powers is absolutely essential.

What Alperovitz proposes are the equivalent of what has been traditionally known as “structural reforms” or in some cases “non-reformist reforms” along with a variation on what the Black Panther Party once called “survival programs.” This is reason enough that this book should not only be read but studied carefully.

The structural reforms and survival programs that Alperovitz is suggesting respond to the irrationality of neoliberal capitalism and the inability of the existing system to meet the needs of a growing percentage of the population. The reforms proposed are both clear and compelling and, in many cases, achievable.

In reading What Then Must We Do? I found it less a platform for revolutionary change than a platform for a frontal assault on neoliberal capitalism. To borrow the terminology of activist Carl Davidson, it is a program of a “popular front” against finance capital. It is the sort of platform and approach that can help to unite a broader progressive movement and make it more than the sum of its parts.

Alperovitz’s concern that the “99%” needs to see examples of the future is not grounded in 19th century utopian socialism. This book is not suggesting that various alternative experiments can be built, exist alone, and somehow convince the larger population — by their example — that this is the way to go. Rather he is suggesting that progressive and left forces undertake a multi-decade process of expanding democracy at all levels, within which the various experiments in alternatives are actualized.

Again, this is very much in line with certain more traditional leftist strategic directions regarding structural reforms and survival programs that can be fought for within the context of democratic capitalism.

But is this enough?

In the fall of 1988, I had the opportunity to tour Northern Ireland, meeting with the leaders of Sinn Féin. One of the areas to which I was introduced were worker cooperatives that had been established by Sinn Féin or its allies.

I arrogantly asked Sinn Féin President Gerry Adams what these cooperatives had to do with the liberation of Ireland from the British. Adams, very patiently, explained to me that, while these cooperatives would not liberate Ireland, at the same time the nationalist population was impoverished and needed a way to survive. With my tail between my legs I acknowledged the profundity of his point.

One of the strengths of What Then Must We Do? is that, much like Sinn Féin in the late 1980s, it is responding to an immediate challenge among the population. It is suggesting that there are things that can and must be done right now particularly within sectors of the population that have been largely written off by either the state or by private capital. The “dead cities” of this country come to mind, like Camden, which have become modern reservations for redundant populations.

A second strength is that the objectives that would fall more within the rubric of structural reforms actually do link with a larger democratizing movement that is necessary to take this country away from its drift toward neoliberal authoritarianism (or, for that matter, right-wing populism).

If thought of as part of a larger strategy, struggles around genuine healthcare reform, banking reform, or alternative economic development become battlegrounds not only in favor of the “99%,” but sites where the people are actually engaged in their own liberation.

But Alperovitz does not answer key questions. What, for example, is neoliberal capital doing while we are moving this democratization process? Alperovitz acknowledges that there remain dangers from the Right, including the use of violence. But this factor is critically important for all leftists and progressives.

The ruling power bloc has largely consolidated around a notion that huge chunks of this population — at least 47%, according to Romney — are nothing more than parasites and should be written off. They see no need, at least at the present time, to construct anything approaching an alliance with the working class generally, or organized labor in particular, along the lines of the New Deal coalition. Rather they seek to either crush the organized forces of the working class altogether or completely marginalize them.

None of this is to suggest that anything other than a movement for consistent democracy should be proposed. Rather, that the struggle that is undertaken in the name of structural reforms, survival, and democracy will inevitably reach a fundamental impasse with capital over the basic rules of society. At that point there should be nothing to lead anyone to believe that capital will handle this peacefully and humbly.

As a result What Then Must We Do? seems incomplete. I was persuaded by Alperovitz that a glimpse into the future is critical largely due to reality of the failure of 20th century socialism, or more accurately, what is better described as the crisis of socialism.

We are not, in other words, starting off with a clean slate. There are experiences with socialist and so-called socialist projects and those experiences are uneven in their outcome, and failed over the longer term to provide an alternative to capitalism.

Yet this does not mean that an evolutionary path into the future is realistic. That may sound contradictory since the direction proposed by Alperovitz is one that I praise. But one must remember the context: his book serves as a platform for a popular front against finance capital. It is not, however, a platform for a new society.

At the same time, the combination of the economic and environmental squeeze leads me to believe that the ruling elite is on a mad dash to secure as much as it can while it can. If this means political disenfranchisement of millions through voter suppression and other efforts, or more direct forms of terror, there is nothing in the history of capitalism that leads me to believe that they will fail to exercise such an option.

Given this, Alperovitz’s platform is at best one component in a much more long-term socialist strategy. By this I mean not only the vigorous fight for structural reforms, but a level of popular organization and mobilization that ultimately pushes for a different constitutional framework, a fundamentally different arrangement in favor of empowering working people, an end to imperialism, and a new relationship between humans on planet Earth.

Such change necessitates a revolutionary transformation and an active process of eliminating the forms of oppression central to capitalism.

In using the term “revolutionary” I am emphasizing a break with actually existing capitalism rather than a slow transformation away from the current toxic system. Such a break, however, is not something that can be led by a small yet spirited sect, and neither is it something that is simply proclaimed. In that sense what Alperovitz suggests at the level of timeline is correct; we are speaking about a process over decades that is then followed by a process of actual transformation lasting decades into centuries.

For many this may all seem like a distinction without a difference, but the importance of clarifying this lies in both matters of expectations as well as strategy. The “Chilean option” succeeded in part because the forces around Allende underestimated what it would take to defeat the political Right. The struggle for structural reforms and survival presented by Alperovitz is essential in cornering the political Right and changing the “common sense” of the U.S. political arena. But it is not enough to wound the rabid beast; one must ultimately bring it down.

This article was first published at Jacobin / a magazine of culture and polemic.”

[Bill Fletcher Jr. is a racial justice, labor and international writer and activist. He is the immediate past president of TransAfrica Forum; a Senior Scholar with the Institute for Policy Studies; and an editorial board member of BlackCommentator.com. His latest books are They’re Bankrupting Us!: And 20 Other Myths about Unions and Reimagining Labor Unions: Busting Myths, Building Movements. Find more articles by Bill Fletcher Jr. at The Rag Blog.]

This entry was posted in RagBlog and tagged Bill Fletcher Jr., Books, Capitalism, Gar Alperovitz, Neo-liberalism, Political Economy, Political Reform, Revolution, Socialism, What Then Must We Do?, Workers Cooperatives. Bookmark the permalink.