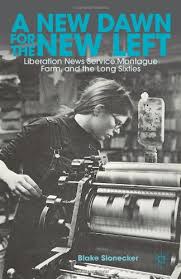 A New Dawn for the New Left:
Blake Slonecker’s valuable history of LNS

It’s hard to imagine anyone paying $85 — the list price — for Blake Slonecker’s comprehensive book about Liberation News Service (LNS), its eclectic members, and its curious reincarnations and permutations. Published in December 2012, A New Dawn for the New Left offers a close look at LNS, the radical organization that lasted more than a decade and that provided a real alternative to the manufactured news and information disseminated by the Associated Press (AP).

Slonecker, a professor of history at Waldorf College in Iowa, captures the spirit of the freewheeling Sixties, though he’s also a compassionate critic who recognizes the excesses and the flaws of the radical movement and the counterculture that accompanied it in the 1960s and 1970s.

It’s not that the book isn’t worth reading. On the contrary, it offers a valuable portrait of LNS as a political collective that aimed to put into practice the rousing slogan of the Industrial Workers of the World (IWW): “building the structure of the new society within the shell of the old.” The book ought to be available at a reasonable price and not priced out of the hands of readers.

Of course, Slonecker isn’t to blame for the $85 sticker shock. His publisher is.

The book begins where it ought to begin — with the notorious heist of the LNS printing press by its two cofounders, the legendary Marshall Bloom and Raymond Mungo. It follows Bloom and Mungo to Montague Farm in Massachusetts, traces the evolution of the rural commune, its deep rural roots, and turn to anti-nuclear protest. At the same time, it looks closely at the LNS collective that regrouped in New York without its troublesome founders.

Slonecker believes that the New York office of LNS was located in Harlem. In the first sentence, he writes, “On the morning of August 11, 1968, something brazen was happening in the Harlem basement of Liberation News Service.” Throughout the book he refers to LNS’s Harlem office.

As a longtime resident of the neighborhood and as a contributor to LNS from 1967 to 1970 who often attended meetings, I can say with a great deal of certainty that LNS was not in Harlem. It was in a basement on Claremont Avenue on the Upper West Side of Manhattan, not far from 125th Street and Broadway. Claremont Avenue was a stone’s throw from Columbia University; LNS’s geographical proximity to academia was more significant than its proximity to Harlem.

LNS staff members such as Allen Young, who played a pivotal role in the early days, graduated from Columbia and from the Washington Post and brought to the New Left’s pioneering news organization a wealth of experience in both academia and professional journalism.

Others at LNS came from similar backgrounds: Andy Marx dropped out of Harvard to join LNS; Mark Feinstein came from The New York Times. Not everyone, of course, was an Ivy Leaguer. Katherine Mulvihill, whose picture appears on the cover of the book, was a high school dropout.

Slonecker does a good job of describing the internal politics, including the sexism, at LNS and the role of the collective within the larger political world of the New Left. He looks at LNS and at the anti-war and anti-nuclear movements and at gay and women’s liberation, as well as Third World and working class struggles. He also provides vivid portraits of Mungo and Bloom, Marty Jezer, Harvey Wasserman, Sam Lovejoy, and Allen Young. The Rag Blog’s Thorne Dreyer makes a few brief appearances, and so does Vicky Smith.

What Slonecker doesn’t do — and that he might have done — is to describe the basement office in more detail. After all, the workplace environment contributed to the state of mind and to the culture of LNS itself. The graffiti in the bathroom was a veritable museum of New Left and counterculture slogans. My favorite was “Stones Cut Beatles.” I also remember the LNS ritual of watching Walter Cronkite on the CBS Evening News during the War in Vietnam.

Slonecker might have provided more details about the actual production of the mimeographed LNS packets that went out to underground newspapers all around the country — to The Seed in Chicago, The Great Speckled Bird in Atlanta, The Barb in Berkeley, and many others. The cover photo by Anne Dockery, shows Katherine Mulvihill at a machine; a description of the work itself would help.

If LNS went out to underground papers, the papers also flooded the office. I’d spend many an afternoon sitting around with the roar of the Gestetner machines in the background reading The Seed, The Barb, The Rag, and finding out what was happening on a grassroots level in Chicago, Berkeley, and Austin.

LNS was a kind of living library, a real movement hub and, not surprisingly, movement honchos often visited. The New Left, including SDS and the Yippies, took it seriously. When I wrote a review critical of Jerry Rubin’s Do It!, Rubin called LNS and complained bitterly. How could LNS not rave about him and his book? he wanted to know, and was told that LNS wasn’t in the business of writing advertising copy and blurbs for New Left and countercultural writers. Hadn’t he heard about freedom of the press?

A New Dawn for the New Left offers ample remarks from the likes of John Wilcock, the cofounder of the Underground Press Syndicate, and Teddy Franklin, part of LNS’s early core group. “We’re paying LNS $180 a year,” Wilcock complained, “to send us whatever they damn well feel like sending us.”

Some of my own pieces for LNS were widely picked up by papers — including a critique of hippie culture entitled “The Children of Imperialism” and a review of a concert by the Rolling Stones I did with Franklin. But other pieces — about books such as B. Traven’s The Treasure of the Sierra Madre — hardly proved exciting to editors at the feisty rags around the country.

Still, it was to LNS’s credit that odd, quirky pieces were published — sometimes by leading movement figures like Abbie Hoffman who wrote with real passion about Marshall Bloom’s suicide.

LNS lasted until about 1980, but by then its glory days had long since passed. Allen Young had moved to rural Massachusetts to live on a commune with other gay men. I’d relocated to California. Thorne Dreyer and Vicky Smith had gone to Houston to start Space City!

By the summer of 1972, veteran LNS members such as Teddy Franklin were lamenting the decline and fall of the underground press and bemoaning the sinking numbers of subscribers to LNS. “I’m hard put to name 10 underground newspapers I have any respect for at this point,” Franklin wrote in 1972. “Let’s be honest, we’re losing our readers out from under our feet.”

In part, what happened was a shift from underground newspapers to what were called “sea-level” weeklies or monthlies, such as University Review and The Chicago Reader.

In the 1970s, papers such as the Village Voice grew fatter and fatter with ad revenue and took over the role that had been played by the underground papers. Moreover, reporters for LNS, such as Mike Schuster, moved to much more reputable news organizations such as PBS. The New Left and its countercultural institutions had provided a training ground for a whole generation of editors, publishers, and journalists who went on to work for mainstream magazines and newspapers.

In a sense, LNS and the underground papers died not because they failed but because they succeeded. As one New Leftist put it, “Nothing sucks like success.”

Slonecker’s book makes a substantial contribution to the literature about the Sixties. It joins the company of recent, outstanding books about the underground press such as John McMillan’s Smoking Typewriters, Sean Stewart’s wonderfully illustrated On the Ground, and Ken Wachsberger’s multi-volume Voices from Underground. Along with them and young writers like Thai Jones, Slonecker belongs to the generation of historians reinterpreting radicalism in America.

[Jonah Raskin, a regular contributor to The Rag Blog is the author of For the Hell of It: The Life and Times of Abbie Hoffman and American Scream: Allen Ginsberg’s “Howl” and the Making of the Beat Generation. Read more articles by Jonah Raskin on The Rag Blog.]