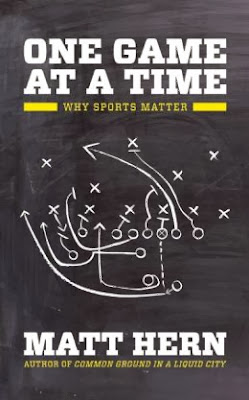 Wait a minute people:
Sports do have meaning

Engagingly written, One Game at a Time is motivated by the belief that sports do matter as much as sports fans think they do.

Earlier this fall the Boston Red Sox baseball team blew most preseason projections of their season all to hell when they bested the St. Louis Cardinals four games to two and won Major League Baseball’s World Series.

Even though the team has already won two such championships this century after an 86-year drought, Boston fans (including myself) were quite ecstatic. As I write, the sports media are announcing the draws for football (that’s soccer to you folks in the U.S.) for the 32 national teams competing in the World Cup. Soon, even the non-sports media will be covering this event. Elsewhere in the sports world, basketball seasons are heating up and U.S. football seasons are cooling down, while ice hockey skates along.

I’m guessing about now some readers are already moving to the next article. After all, goes their thinking, sports are just another distraction. Why does anyone care?

I don’t know the exact answer to that question. Nor, can I explain why I spend so many hours every summer watching, listening to, and umpiring baseball. However, there are a few writers currently around who continue to investigate that question. Writing in the tradition of The Daily Worker’s Lester Rodney and the Trinidadian CLR James, these writers attempt to place sports at all levels — youth to college to professional level — within the context of capitalist economics and the culture that grows from such economies.

I have reviewed a couple of leftist sportswriter Dave Zirin’s works, as well as Gabriel Kuhn’s top notch look at soccer titled Soccer vs. the State. These two writers take a serious and engaging look at the role sports play in making money for the neoliberal robber barons.

Zirin also champions individual athletes who use their notoriety to encourage gender and racial tolerance and even challenge imperial war. Kuhn has done similar work regarding various football players and teams. Between the two of them, the role played by professional sports in maintaining neoliberal economics and nationalist tropes is breached and examined.

Matt Hern is a sportswriter living in Vancouver, BC. His recently published title One Game at a Time walks into the terrain where sports and politics mesh, taking a look at some of the same issues his compatriots examine and exploring new ones. Hern’s view contains a bit more bravado than either Zirin’s or Kuhn’s, as if sports radio grew a brain while retaining its brashness.

Engagingly written, One Game at a Time is motivated by the belief that sports do matter as much as sports fans think they do. It’s just that they matter in ways not explored by the mainstream media and the advertising machine behind them.

Hern compares sports to other pursuits like music and theater. By doing this, he validates the multiple experiences associated with sports — from participation at any level to viewing them and fandom — while simultaneously critiquing capitalism’s manipulation of all the aforementioned pursuits in the name of maximum profit.

In other words, Hern extols the virtues of sports, yet takes capitalism to task for twisting their cultural value in a manner similar to capitalism’s manipulation of music, theater, and film. Instead of quality hip hop and rock, the masses get fed sexist nonsense and pop pablum promoting greed. When it comes to sports, we get corporatism, nationalism, overpriced cable television coverage, and tickets only the wealthy can truly afford; not to mention athletes afraid to speak out against wrongs for fear of losing their jobs and corporate sponsors.

Zirin has championed boxer Muhammad Ali as an example of a sports hero who rose above his game. Indeed, it can be reasonably argued that Ali is more famous for his presence and actions outside the boxing ring than for his feats within the ropes.

Hern adds to Zirin’s portrayal of Ali, detailing how his image has been watered-down and depoliticized, then writing “We have to be willing to read Ali as he was: defiant, radical, complex, devout, confusing, dangerous, and all the rest….” If we do this, then perhaps modern athletes will find the strength to replicate Ali’s militancy and courage. Then, sports can matter even more and for greater reasons than the reasons most fans currently care about them.

Matt Hern is a welcome addition to the growing team of sportswriters willing to move sports out of their current position that masquerades as being apolitical while actually being outrageously political in support of the status quo.

The excessive importance of sports in modern society is not going to go away. Therefore, it is crucial that those sportswriters whose writing challenges the conventional narrative accompanying the sports spectacle be read by as many people as possible. The crack they have created in the nationalist, pro-capitalist, homophobic, and even racist sports coverage too many fans have grown used to is finally shedding a little light on the cloistered world that is modern athletics.