BOOKS / Ron Jacobs : ‘The People’s Pension’ and the War Against Social Security 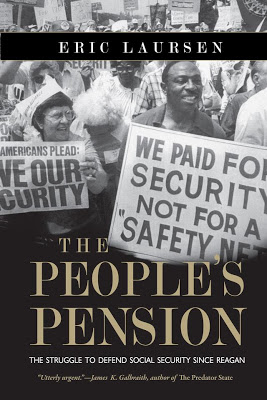 ‘The People’s Pension’:
The war against social security

The opponents of this program are not interested in saving money, a fairer distribution of benefits, or helping the elderly. They are serving an ideological agenda of social Darwinism.

It seems like every few months alarms are sounded warning U.S. workers that Social Security is going bankrupt. Oftentimes, the follow-up to these alarms includes a warning that the only way to save the system is to turn all or part of the funds involved over to Wall Street investment houses like Goldman Sachs.

Usually the alarms are sounded by right-wing politicians from the Republican Party. In recent years however, this cacophony of lies has been assisted by more and more Democrats.

According to Eric Laursen, in his new book titled The People’s Pension: The Struggle to Defend Social Security Since Reagan, the desire to end what is Washington’s most successful government program has been underway since Social Security’s inception. It has only intensified in recent decades. As the title suggests, that intensification sharpened in 1981, the year Ronald Reagan became president.

As anyone with an understanding of neoliberal capitalism and the role played by investment houses in this stage of capitalism knows, that year coincides more or less with an increased interest in Social Security funds by those houses. Why? Because their required growth requires more funds to invest and there are billions of dollars in funds sitting in the Social Security reserves.

Laursen provides the reader with a brief history of the philosophy behind Social Security. Harkening to the writings of 19th century anarchists and leftists, he describes part of the impetus behind Social Security as coming from the ideas of mutual aid; where every citizen is cared for. More specifically, he traces the institution of the social security system to the Townsend clubs begun in the 1930s by Dr. Francis Townsend of California.

It was Townsend’s idea that old people should be guaranteed an income based on their work and funded by taxes. His reasoning was simple, if senior citizens had an income, they could remain consumers, thereby helping stimulate the economy. Millions joined these clubs, exerting political pressure that led to the Social Security Act of 1937. Naturally, this act was fervently opposed by many corporate executives and the wealthy as being socialist and un-American.

Most of today’s opponents are not so blunt in their assessment. However, their proposals to privatize the system suggests that they too oppose a government program that does not benefit their corporate benefactors. Instead, they would rather turn it over to the Goldman Sachs of the world. This desire is certainly related to the substantial campaign donations they receive from Goldman Sachs and their cohorts.

One expects right wing politicians opposed to any government expenditures not related to benefiting private industry and the Pentagon to oppose Social Security. It is the Democratic opponents who deserve our real attention. Laursen’s history is also a history of the gradual shrinking of support among Democrats and other so-called liberals.

The People’s Pension puts the beginning of the current assault on Social Security in the lap of the Reagan administration. Laursen makes it very clear that the opponents of this program are not interested in saving money, a fairer distribution of benefits, or helping the elderly. They are serving an ideological agenda of social Darwinism.

Furthermore, every attack on Social Security is nothing more or less than an attempt by the corporate world and its right-wing supporters to end it once and for all. Laursen further points out that the arguments used by Social Security’s opponents never address the economic consequences of ending the program; they only draw up flimsy prognostications of disaster should the program continue.

Privatization would  be nothing more than one more method for corporate America to take public monies and privatize the profits while insuring the continued socialization of the risks and loss. As Laursen points out, this is exactly what is done by the defense industry and any scheme to privatize Social Security would do the same thing.

A fact that is not very well known outside of certain circles is that the model for privatization promoted by the so-called supply side economists was developed in the fascist Chile of Augusto Pinochet. Championed by many Republicans and their banker/corporate sponsors, this model is ultimately more expensive than keeping things as they are and its greatest benefits would be to the banking industry.

Furthermore, this and other privatization schemes assume an ever-growing capitalist economy — a phenomenon less certain than it was before the crash of 2008. Despite this, politicians continue to include Social Security in their gunsights. Whether it’s Alan Simpson calling Social Security a “Milk Cow with 310 Million Tits,” or so-called Blue Dog Democrats suggesting that benefits be changed, the assault on the program never goes away.

Eric Laursen has written a comprehensive and exhaustive history of the Social Security program in the United States. The People’s Pension is an honest, detailed, and even eye-opening discussion of the program’s origins and continuing efforts to provide elderly and disabled Americans with a livable income.

Equally important, it is a discussion of the attempts to alter and ultimately destroy the program by forces whose only interest seems to be profit and the elimination of any government institution that guarantees every citizen worker an income in their old age.