Cleaning Up the Guantanamo Mess: Worthington Provides Some Valuable Details 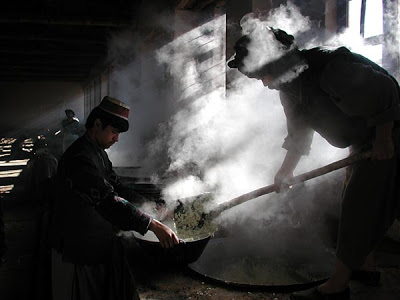 How Cooking For The Taliban Gets You Life In Guantánamo
By Andy Worthington / February 01, 2009

Those of us who prefer justice to arbitrary and unaccountable detention without charge or trial were delighted when, last week, Barack Obama fulfilled a long-stated promise and issued a presidential order stating that Guantánamo will be closed “as soon as practicable, and no later than one year from the date of this order,” and establishing an immediate review of the cases of the remaining 242 prisoners to work out whether they can be released.

A year is a long time, of course, if you’re unfortunate enough to have been imprisoned in Guantánamo for up to seven years with no way of asking why you’re being held, but some of us were prepared to give the new President the benefit of the doubt, and to consider that perhaps he didn’t want to make a rash promise that he might find himself unable to fulfill, such as pledging to close the wretched place in a matter of months.

Recent events, however, have demonstrated that, although President Obama has set in motion a policy that addresses the prisoners’ future, their long desire to have an opportunity to question the basis of their detention is currently being addressed not in the White House but in the District Courts, following an epic, four-year struggle between the Supreme Court and Congress to grant them their wish. Since the justices of the Supreme Court decisively ended this struggle last June, by ruling that Congress had acted unconstitutionally when it stripped the prisoners of the habeas corpus rights that the Supreme Court had granted them in June 2004, a raft of previously marooned habeas cases has been making its way through the District Courts.

Justice and the habeas reviews

Although frequently becalmed by pleas from the Justice Department, whose lawyers have had the nerve to claim, after seven years, that they are having trouble rustling up any evidence, a handful of these cases have actually made it to the point where a judge has ruled on their merits. The results have been a vindication for those who have struggled for years to get the prisoners a day in court, and, of course, for the prisoners themselves, because in 23 of the 27 cases reviewed to date, the judges have dismissed the government’s evidence for being empty and unsubstantiated — in one case comparing it to a nonsense poem by Lewis Carroll, the author of Alice’s Adventures in Wonderland — and have ordered the prisoners to be released.

Sadly, the impact on the prisoners has so far failed, for the most part, to match the significance of the rulings. In the case that drew comparisons with Lewis Carroll — that of Huzaifa Parhat, a Uighur from China’s oppressed Xinjiang province — the government lodged a miserable and unprincipled appeal to stop Parhat and his 16 compatriots from settling in the United States, after District Court Judge Ricardo Urbina ruled in October that their continued detention in Guantánamo was unconstitutional. In November, Judge Richard Leon, an appointee of George W. Bush, ordered the release of five Bosnians of Algerian origin, after he concluded that the government had failed to establish that, as alleged, they had intended to travel to Afghanistan to fight U.S. forces, but to date only three of the men have been repatriated, and the other two still languish in Guantánamo, as the Bosnian government wrangles over their status. The last case is that of Mohammed El-Gharani, a Chadian national and Saudi resident who was just 14 years old when he was seized in a raid on a mosque in Pakistan. Two weeks ago, Leon comprehensively demolished the government’s supposed evidence against El-Gharani, but he too remains stranded, pending a possible appeal.

To be or not to be (an enemy combatant)

In many ways, however, these prisoners are the lucky ones. In four other cases, the scales of justice have tipped the other way, into an alarming arena in which it has become apparent that the Supreme Court failed to address whether, in cases where the government is judged to have produced sufficient evidence to indicate that prisoners were “enemy combatants,” it is justifiable to continue holding them indefinitely.

The problem, as these other four cases have revealed, is that, according to the definition accepted by Judge Leon, an “enemy combatant” does not have to be someone who actually engaged in terrorism or in combat against the United States, but rather someone who was “part of or supporting Taliban or al-Qaeda forces, or associated forces that are engaged in hostilities against the U.S. or its coalition partners,” which “includes any person who has committed a belligerent act or has directly supported hostilities in aid of enemy armed forces” (emphasis added).

What this means in reality is that Judge Leon ruled in November that Belkacem Bensayah, the sixth Bosnian Algerian, was an “enemy combatant” not because he had been involved in a specific al-Qaeda plot, and not because he had raised arms against the United States in Afghanistan or anywhere else, but because the government provided what Leon regarded as “credible and reliable evidence,” establishing that he “planned to go to Afghanistan to both take up arms against US and allied forces and to facilitate the travel of unnamed others to Afghanistan and elsewhere,” and that he was “link[ed]” to a senior al-Qaeda operative (identified elsewhere as the mentally troubled training camp facilitator Abu Zubaydah, whose specific links to al-Qaeda have been questioned by the FBI).

This may be sufficient evidence to put Bensayah on trial, although it is surely not adequate to warrant his indefinite detention in Guantánamo, but in the cases of the other three men the noose-like nature of the “enemy combatant” definition was even more pronounced. On December 30, Judge Leon ruled that two more prisoners — the Tunisian Hisham Sliti and the Yemeni Muaz al-Alawi — were also correctly detained as “enemy combatants;” in Sliti’s case because, despite being a cynical and dissolute drug addict, he was associated with individuals connected to al-Qaeda, and, in al-Alawi’s case, because, although he had traveled to Afghanistan before the 9/11 attacks and was not alleged to have raised arms against U.S. forces, he “stayed at guest houses associated with the Taliban and al-Qaeda … received military training at two separate camps closely associated with al-Qaeda and the Taliban and supported Taliban fighting forces on two different fronts in the Taliban’s war against the Northern Alliance.”

Cooking for the Taliban

This ruling in particular cried out for an immediate overhaul of the “enemy combatant” definition, but yesterday the absurdity of holding prisoners as “enemy combatants” who were associated with the Taliban before the 9/11 attacks but never raised a finger against the United States was highlighted even more forcefully when Judge Leon ruled, in the case of the Yemeni Ghaleb Nasser al-Bihani, that he too was an “enemy combatant.”

Leon based his ruling on the fact that the government had established, primarily through interrogation, that al-Bihani had worked as a cook for the Taliban. Concluding that it was “not necessary” for the government to prove that he “actually fire[d] a weapon against the U.S. or coalition forces in order for him to be classified as an enemy combatant,” Leon declared, “Simply stated, faithfully serving in an al-Qaeda-affiliated fighting unit that is directly supporting the Taliban by helping prepare the meals of its entire fighting force is more than sufficient to meet this Court’s definition of ‘support.'” He added, “After all, as Napoleon was fond of pointing out, ‘An army marches on its stomach.'”

Al-Bihani listened to Leon’s ruling in a teleconference call from Guantánamo, but was cut off before hearing Leon’s line about Napoleon. His lawyers, Shereen J. Chalick and Reuben Camper Cahn, of the Federal Defenders of San Diego, said that they would take a rush transcript of the ruling to al-Bihani, adding that he would be “disappointed” with the decision, but the reality, I can reveal, is that al-Bihani gave up on U.S. justice many years ago.

“I am definitely an enemy combatant”

In 2004, at his Combatant Status Review Tribunal at Guantánamo — a toothless administrative review that was designed, essentially, to confirm that, on capture, he had been correctly designated an “enemy combatant” — al-Bihani was acutely aware of Guantánamo’s failings, and addressed all the issues raised yesterday by Judge Leon. Firstly, he admitted that he had traveled to Afghanistan in April or May 2001 “to fight the jihad with the Taliban” against Ahmed Shah Massoud (the leader of the Northern Alliance), and added, “There is nothing wrong with that in our religion. Is it acceptable for Americans and not for us?”

He then disputed an allegation that he “was an associate of the Taliban and/or al-Qaeda,” pointing out that he had admitted “many times” that he was with the Taliban, but that the statement as it stood “suggests that you are [not] giving me a choice between Taliban and al-Qaeda,” and also denied an allegation that he participated in hostilities against the United States, explaining, “I went to Afghanistan before the Americans. If I wanted to fight the Americans I would have gone there after the Americans arrived.”

If you want a final demonstration of the ongoing absurdity of Guantánamo, compare the case of Salim Hamdan to that of Ghaleb al-Bihani. Last August, Hamdan, a driver for Osama bin Laden, was tried at Guantánamo in the Military Commissions conceived by Vice President Dick Cheney and his advisers, sentenced and sent home in November to serve the last few weeks of a five-month sentence delivered by a military jury. Hamdan is now a free man, whereas al-Bihani, a man who never met Osama bin Laden, let alone driving him around, has just been told, by a judge in a U.S. federal court, that the government is entitled to hold him forever because he cooked dinner for the Taliban.

If President Obama is genuinely concerned with justice, he needs to act fast to tackle this squalid state of affairs, which does nothing to undo the previous administration’s disdain for and mockery of the laws on which the United States was founded.

[Andy is the author of The Guantánamo Files: The Stories of the 774 Detainees in America’s Illegal Prison. His website is: www.andyworthington.co.uk.]