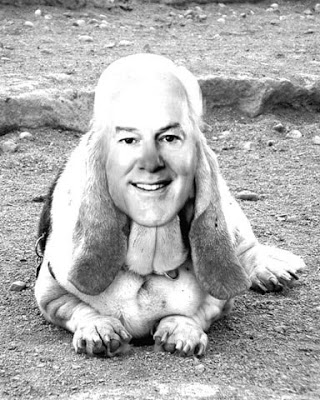 Sen. John (Corn Dog) Cornyn, R-Texas, aka “Lap Dog to the President.” Graphic by Bill Narum / The Rag Blog
John Cornyn Funds the War But Not Those Who Fought It
By Karl-Thomas Musselman/ May 23, 2008

The first paragraph from this article in the Fort Worth Star-Telegram says it all.

U.S. Sen. John Cornyn, R-Texas, voted to approve $165 billion for the wars in Iraq and Afghanistan but provided one of 22 votes against the domestic spending measure that is paired with the war spending bill. The Senate bill would add about $50 billion through 2017 for veterans’ education benefits.

John Cornyn provided one of just 22 votes against this bill which was an expanded version of the GI Bill, called the Post-9/11 Veterans Educational Act, to increase education benefits for veterans returning from Iraq and Afghanistan. Even Texas’ other Senator, Kay Bailey Hutchison voted for it along with many of the Republican Senators up for re-election this year who are trying to moderate their positions in an election year.

But not John Cornyn. Here’s what he’s had to say about this bill.

“The anti-war crowd is determined to use our men and women in uniform for their political advantage, even if our national security is jeopardized in the process,” Cornyn campaign spokesman Kevin McLaughlin said.

And again on his reasons to oppose it.

The updated GI Bill would hurt re-enlistment rates because troops will be eager to take advantage of it.

The Austin American-Statesman replied to this line of argument on their editorial page today. Simply put…

While those arguments will no doubt be repeated often between now and November, they are as empty as the arguments that the World War II era GI Bill cost too much. How much is too much for people we ask to walk into bullets?

Supporting the troops is more than plastering a yellow decal on a car. Real support means a commitment of money. Mere money doesn’t match the commitment we asked the troops to make.

President Bush is now threatening to veto the legislation. But Cornyn has already indicated he’s willing to vote against overriding the veto. You should sign Rick Noriega’s petition calling on Cornyn to vote to override that veto.

This entry was posted in RagBlog and tagged Congress, Cornyn, GI's, Iraq, Veterans. Bookmark the permalink.