Daniel Ellsberg and the Concept of Freedom of Conscience 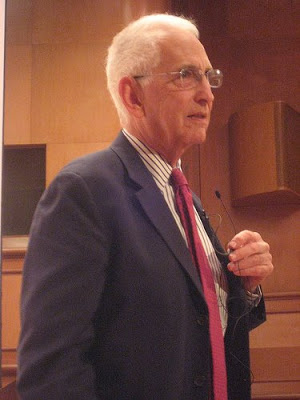 When I attended the presentation at the University of Texas at Austin on Tuesday evening by Daniel Ellsberg, the concept of freedom of conscience was already on my mind.

A few days prior, I had gone to a special commemoration of Gandhi’s birthday, where conscience was posed as a religious freedom issue by one of the speakers, a local war tax resister. Souvenir bookmarks containing Gandhi quotes were distributed around the tables, and the one I happened to pick up read, “In matters of conscience, the law of majority has no place.”

Then, over the weekend, an inaugural conference was held in Austin, organized chiefly by the pastor and congregation of the Austin Mennonite Church. The National Assembly to Honor Freedom of Conscience featured guest speakers Walter Wink (noted theologian and nonviolence trainer), Gene Stoltzfus (former director of Christian Peacemaker Teams) and Ann Wright, whose book, “Dissent: Voices of Conscience” was published this year and includes a foreward by Daniel Ellsberg. Conference panelists included conscientious objectors and GI resisters whose stories parallel those in Wright’s book.

Ann Wright spoke also at a book signing event at BookWoman on Monday, where matters of conscience, government, law, risk, family and the military were discussed by those present, including, again, several conscientious objectors. The week seemed to come full circle with Ellsberg’s Austin appearance the following evening.

In conjunction with a UT conference planned for the coming weekend, Ellsberg was asked to compare what was happening in 1968 with what is happening now. He packed a lot in – dates, names, places and people – while his primary message echoed what I had heard all week: truth can free us from war.

Ellsberg did not talk much about the tragedies and tumult of 1968, but rather focused on what he saw and experienced as a government insider. “1968 is a year I don’t like to relive,” he admitted. He spent most of his time describing events leading up to that year, beginning with the Gulf of Tonkin resolution in 1964 and the tangled web that was spun from it and later documented in the Pentagon Papers. Ellsberg also recounted something about the less tangible factors that led to the escalation of the Indochina War – the human strengths and frailties of the political and military actors at that time, including him.

Ellsberg spoke with an intense clarity of memory, recounting the details of who said what when, what they probably meant and what they probably did or didn’t know at the time. I sensed that in spite of the strange mix of pariah/hero status he attained following the publishing of the Pentagon Papers, he still is proud of the insider position he once held and perhaps even misses the feeling of closeness that resulted from being loyal to powerful people and knowing their secrets. In fact, he said that being called a traitor is something he has never gotten used to.

In his talk, Ellsberg didn’t fully explain his inner change of heart, the private crisis of conscience that led him to shift from personal loyalty to the president and joint chiefs of staff to a more abstract loyalty to the Constitution and international law. But, as he wrote in an article in Harpers in 2006 (quoted by UT’s Evan Carton during his introduction of Ellsberg),

I had long prized my own identity as a keeper of the president’s secrets. In 1964 it never even occurred to me to break the many secrecy agreements I had signed, in the Marines, at the Rand Corporation, in the Pentagon. Although I already knew the Vietnam War was a mistake and based on lies, my loyalties then were to the secretary of defense and the president (and to my promises of secrecy, on which my own career as a president’s man depended). I’m not proud that it took me years of war to awaken to the higher loyalties owed by every government official to the rule of law, to our soldiers in harm’s way, to our fellow citizens, and, explicitly, to the Constitution, which every one of us had sworn an oath ‘to support and uphold.’ It took me that long to recognize that the secrecy agreements we had signed frequently conflicted with our oath to uphold the Constitution.

More about the role of conscience in Ellsberg’s moral conflict can be found in a passage I read about ten years ago in Daniel Hallock’s collection of writings and interviews, Hell, Healing and Resistance: Veterans Speak. The book includes an interview with Ellsberg in which he recalls these pivotal personal events in 1968 and ’69:

Now, two things affected my life at that point. I’d been reading Gandhi since the spring of ’68, when I happened to meet people from the Quaker Action group at a conference in Princeton. I had gone there to study counter-revolution, and they were there as nonviolent revolutionaries. So I started reading MLK, Stride Toward Freedom, and Barbara Deming, who wrote an essay called Revolution and Equilibrium. I read and reread many times a book by Joan Bondurant called The Conquest of Violence, on Gandhian thought, which converted me very strongly, very impressively.

Then, in late August 1969 I went to a conference of the War Resisters League – they were founded by World War I CO’s; Einstein was once their honorary president – and in the course of this conference I was induced to go to a vigil for somebody who was going to prison for draft resistance, which was a very unusual thing for me to be doing. There I was, standing in the street outside the Philadelphia post office, passing out leaflets. This was not the sort of thing the GSA Team did. It seemed, you know, rather undignified – giving away your influence and your access in such a ridiculous way, just handing out leaflets like a bum.

Then, at the end of this conference, I met another young man, Randy Kehler, a Harvard college graduate who had gone on to Stanford but then stopped his studies to work for the War Resisters League. He gave a talk and at the end he announced that he was also on his way to prison for refusal to cooperate with the draft. And this came to me as a total shock. It just hit me that it was a terrible thing for my country that the best he and so many others could do was go to prison. I went to the men’s room and just sat on the floor and cried for about an hour and thought, ‘My country has come to this? We’re eating our young. We’re relying on them, to end the war and to fight the war?’ And I felt it was up to me. I was older. I was thirty-eight. It was up to us older people to stop the war.

Ellsberg realized his tool was information and his sacrifice was the loss of his insider position and a risk, like that of the draft resister, of imprisonment. MLK’s April 4, 1967 admonition, “A time comes when silence is betrayal,” gained special meaning for him.

Ellsberg feels we are in a similarly critical time now. It’s a time that calls for greater risk-taking. He said that Obama, for example, could risk standing against an escalation of the Iraq war into Iran, Afghanistan or Pakistan. Links ought to be made between the economic crisis and the war. “Can we afford to murder people at this cost indefinitely?” is the question we must ask, he says. He pointed out that in the five years after 1968 – when the Indochina war had lost almost all popular support, four times as many bombs were dropped in Southeast Asia as were dropped prior to 1968. He fears the same kind of enlargement of war could easily happen again. “Power doesn’t learn from history,” he said. “Power follows its own dictates; power doesn’t give up its power.”

Ellsberg concluded, “This country needs to advance in another direction.” Directed by conscience and moved by the acts of conscience of others, people can change course. His life is a case in point. Truth can stand up to power, and a bum with a leaflet can change the course of history.