Garrison Keillor : Juicing Up the Ticket With Sarah 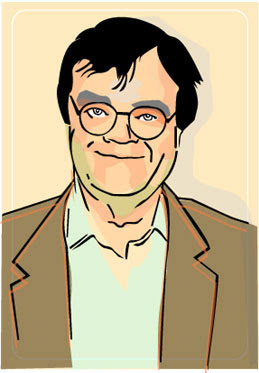 Dishonest, cynical men put forward Sarah Palin for national office, but the truth emerges: The lady is talking freely about matters she has never thought about.
By Garrison Keillor / October 8, 2008

We are a stalwart and stouthearted people, and never more so than in hard times. People weep in the dark and arise in the morning and go to work. The waves crash on your nest egg and a chunk is swept away and you put your salami sandwich in the brown bag and get on the bus. In Philly, a woman earns $10.30/hour to care for a man brought down by cystic fibrosis. She bathes and dresses him in the morning, brings him meals, puts him to bed at night. It’s hard work lifting him and she has suffered a painful hernia that, because she can’t afford health insurance, she can’t get fixed, but she still goes to work because he’d be helpless without her. There are a lot of people like her. I know because I’m related to some of them.

Low dishonesty and craven cynicism sometimes win the day but not inevitably. The attempt to link Barack Obama to an old radical in his neighborhood has desperation and deceit written all over it. Meanwhile, stunning acts of heroism stand out, such as the fidelity of military lawyers assigned to defend detainees at Guantánamo Bay — uniformed officers faithful to their lawyerly duty to offer a vigorous defense even though it means exposing the injustice of military justice that is rigged for conviction and the mendacity of a commander in chief who commits war crimes. If your law school is looking for a name for its new library, instead of selling the honor to a fat cat alumnus, you should consider the names of Lt. Cmdr. Charles Swift, Lt. Col. Mark Bridges, Col. Steven David, Lt. Col. Sharon Shaffer, Lt. Cmdr. Philip Sundel and Maj. Michael Mori.

It was dishonest, cynical men who put forward a clueless young woman for national office, hoping to juice up the ticket, hoping she could skate through two months of chaperoned campaigning, but the truth emerges: The lady is talking freely about matters she has never thought about. The American people have an ear for B.S. They can tell when someone’s mouth is moving and the clutch is not engaged. When she said, “One thing that Americans do at this time, also, though, is let’s commit ourselves just every day, American people, Joe Six-Pack, hockey moms across the nation, I think we need to band together and say never again. Never will we be exploited and taken advantage of again by those who are managing our money and loaning us these dollars,” people smelled gas.

Some Republicans adore her because they are pranksters at heart and love the consternation of grown-ups. The ne’er-do-well son of the old Republican family as president, the idea that you increase government revenue by cutting taxes, the idea that you cut social services and thereby drive the needy into the middle class, the idea that you overthrow a dictator with a show of force and achieve democracy at no cost to yourself — one stink bomb after another, and now Gov. Palin.

She is a chatty sportscaster who lacks the guile to conceal her vacuity, and she was Mr. McCain’s first major decision as nominee. This troubles independent voters, and now she is a major drag on his candidacy. She will get a nice book deal from Regnery and a new career making personal appearances for 40 grand a pop, and she’ll become a trivia question, “What politician claimed foreign-policy expertise based on being able to see Russia from her house?” And the rest of us will have to pull ourselves out of the swamp of Republican economics.

Your broker kept saying, “Stay with the portfolio, don’t jump ship,” and you felt a strong urge to dump the stocks and get into the money market where at least you’re not going to lose your shirt, but you didn’t do it and didn’t do it, and now you’re holding a big bag of brown bananas. Me, too. But at least I know enough not to believe desperate people who are talking trash. Anybody who got whacked last week and still thinks McCain-Palin is going to lead us out of the swamp and not into a war with Iran is beyond persuasion in the English language. They’ll need to lose their homes and be out on the street in a cold hard rain before they connect the dots.

[Garrison Keillor is the author of a new Lake Wobegon novel, “Liberty” (Viking).]

Thanks to Doug Zabel and Shelia Cheaney / The Rag Blog

1 Response to Garrison Keillor : Juicing Up the Ticket With Sarah