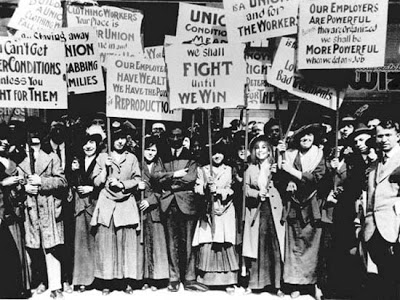 Five Ideas to Start Going from Uprising to Movement
By David Sirota / July 9, 2008

David Sirota is a senior editor at In These Times magazine and contributes regularly to The Nation, the American Prospect and the Huffington Post. He is the author of “The Uprising: An Unauthorized Tour of the Populist Revolt Scaring Wall Street and Washington.”

Jared Bernstein asks, “What steps ought we be taking now that will ultimately give progressive uprisings a public conduit through which their goals can be achieved?”

Based on my reporting for The Uprising, here are five concepts I think we need to get comfortable with – one is about our focus, one is about structure, one about what we organize around, ]one is about what instruments of influence we use, and one is about the methods we must rekindle:

Or, Stop Obsessesing About Chris Matthews and Start Obsessing About Your State Legislator: The subject of my upcoming newspaper column this week is the incessant focus on federal politics to the exclusion of everything else. In the blogosphere, this myopia is magnified, as more bandwith is spent fretting over what MSNBC’s Chris Matthews tells his tiny, inside-the-Beltway audience than what our own state legislator is doing to screw us over.

There is a huge amount of power at the state and local level that progressives haven’t used effectively, in part, because we haven’t spent much time trying to use it. According to the Progressive States Network, more than a quarter of all Americans live in states that have both a Democratic governor and full Democratic control of the legislature. Yet, as many good bills that have passed through these legislatures, none of these states have taken truly revolutionary steps. Again, that’s because we haven’t focused nearly the resources and attention that we could – and should – be focusing on these arenas.

End the Oxymoron of Autocratic Progressivism:

Autocratic Progressives, as I discussed yesterday, are those who think you can build a progressive movement with anti-progressive, autocratic, top-down, command-and-control structures. This is elitism at its worst. If we want to take this uprising moment and channel it into a progressive movement, then the movement institutions we build have to be small-d democratic. Sadly, most of the much-vaunted new progressive infrastructure – from Moveon.org to well-funded left-leaning think tanks in Washington, D.C. – run the gamut from mostly undemocratic to completely undemocratic. That’s not the way to build a movement – and I say that not just from a moral, pro-democratic standpoint, but from a pragmatic one.

There’s a reason the most durable and powerful social movement in human history has been – and remains – the labor movement: it’s because that movement is structurally democratic. The labor movement elects leaders at all levels. Now, I’m not saying there haven’t been examples of labor leaders trying to thwart democracy – I’m not saying that at all. But what I am saying is that at the structural level, the labor movement is democratic – and that democratic structure has given members a sense of ownership and control over their movement that does not exist in undemocratic institutions. If we want this uprising to become a progressive movement, we have to get serious about our commitment to democracy.

It’s the Economic Issues, Too:

For about a quarter century now, the Democratic Party has defined its orthodoxies only on social issues – choice, civil rights, guns, etc. – not on economic ones. To know this is true, consider this hypothetical: If a pro-choice, pro-NAFTA congressperson was proposed as the keynote speaker at the Democratic National Convention, this would be billed as not controversial, but if an anti-choice, anti-gay-marriage, anti-NAFTA congressperson was proposed as that speaker, it would be labeled a major controversy. The orthodoxy, you see, is on the social issue – not on the economic one.

Let me be clear – social issues are really, really important (and, of course, I am pro-choice). But the problem is that the orthodoxy is ONLY about social issues (the issues that are unfortunately more culturally divisive) – but not about economic issues (the issues that are more cross-culturally unifying). To build this uprising into a full-fledged progressive movement, that has to change. Movements are about building wide coalitions – and the uprising I describe in the book shows the potential for trans-partisan, trans-geographical, trans-cultural coalitions if progressives and the Democratic Party drop the limousine liberalism that says as long as a politician is, say, pro-choice, it’s OK for that politician to support, say, job-killing trade policies that have decimated the heartland. The most powerful movements of the the past have been those that have powerful economic and class underpinnings.

Elections Are Means, Not Ends:

The flag-pin-fetishizing media tries to make us believe that elections – and specifically federal elections – are the ends, rather than the means. This is amplified by a progressive movement that is still struggling with Partisan War Syndrome – the sickness that says the only thing we have to do is elect Democrats and our problems are solved. The entire frame of mind is, of course, idiotically paternalistic – we believe that the messianic politicians will just hand down change from Mt. Olympus, that all we have to do is make sure the right messiah is on top of the mountain, and that trying to use an election to pressure that messiah will threaten the messiah’s ascent.

This is not how power works – or has ever worked – in American history. Jefferson Smith is right – the most successful movements have been those that meld the best of populism and progressivism, and I would add to that – those that have used elections as instruments of pressure: They have used the politicians’ desperate desire to win election as a way to get policy concessions and seen politicians as vehicles for change, not change unto themselves. When we tamp down that pressure system, or try to transform a potential pressure system like the blogosphere into merely an amplifier of one party or politician, we ignore this history. As Dan Cantor of the Working Families Party told me when I reported on third-party politics, the best kind of politician is a nervous politician – because you can get a nervous politician to be your vehicle if you have done the hard, unglamorous work in the lead-up to organize your movement.

Along with the paternalistic view of politicians that comes from the obsession with federal elections comes the potential to forget about direct action: the actions outside the electoral arena that can change things. In my book, I detail a number of these – most prominently, the shareholder democracy and labor movements.

The Establishment wants us to focus all of our energy on elections because elections are the controlled space whereby popular ferment can be contained by rules, regulations, etc. And without direct action, republican democracy is truly disempowering: our only means of influence are to beg the Very Serious And Important Intermediary – the congressman, the governor, the president, etc. – to do something on our behalf. But there are many different methods of direct action – ie. taking matters into our own hands – that can wield a tremendous amount of power.

Right now, the labor movement could go out and organize another 10 million workers without a single policy change in Washington, D.C. – and if labor did that, it would increase its power not just in the electoral arena, but in employer-employee negotatiations – the place where the real rubber hits the road on issues like wages, health care, etc. This would be an example of direct action.

I’m not saying this would be easy – nor am I saying labor isn’t trying to do this already, nor am I saying who is in office wouldn’t make it harder or easier for labor unions to accomplish this organizing task. But when I met with organizers at WashTech (the union trying to organize high-tech workers in the Pacific Northwest), they were way less concerned about who is president and who is in Congress than they were about whether they could simply go out and convince enough workers to join their union. Same thing with shareholder activists that I accompanied to ExxonMobil’s 2007 shareholder meeting. These activists weren’t focused on who is ahead in the presidential polls – they were focused on getting as many shareholders to vote for their resolution.

This is the lost legacy of direct action – a legacy that progressives must spend a lot more time rekindling.

Find The Uprising: An Unauthorized Tour of the Populist Revolt Scaring Wall Street and Washington by David Sirota at Amazon.com.

This entry was posted in RagBlog and tagged History, Labor Unions, Populism, Progressives, Social Movements, The Left. Bookmark the permalink.