Our President : ‘Goodbye from the world’s biggest polluter’ 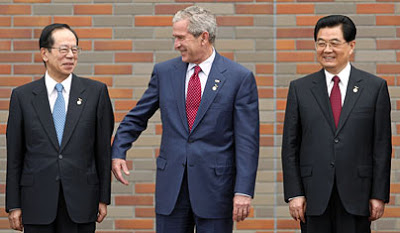 Bush yuks it up with Prime Minister of Japan, Yasuo Fukuda, and Chinese President Hu Jintao at the G8 Summit in Tokyo. Photo by Reuters.
George Bush surprised world leaders with a joke about his poor record on the environment as he left the G8 summit in Japan.
By Robert Winnett and Urmee Khan / July 10, 2008

The American leader, who has been condemned throughout his presidency for failing to tackle climate change, ended a private meeting with the words: “Goodbye from the world’s biggest polluter.”

He then punched the air while grinning widely, as the rest of those present including Gordon Brown and Nicolas Sarkozy looked on in shock.

Mr Bush, whose second and final term as President ends at the end of the year, then left the meeting at the Windsor Hotel in Hokkaido where the leaders of the world’s richest nations had been discussing new targets to cut carbon emissions.

One official who witnessed the extraordinary scene said afterwards: “Everyone was very surprised that he was making a joke about America’s record on pollution.”

Mr Bush also faced criticism at the summit after Silvio Berlusconi, the Italian Prime Minister, was described in the White House press pack given to journalists as one of the “most controversial leaders in the history of a country known for government corruption and vice”.

The White House apologised for what it called “sloppy work” and said an official had simply lifted the characterisation from the internet without reading it.

Concluding the three-day event, leaders from the G8 and developing countries proclaimed a “shared vision” on climate change. However, they failed to bridge differences between rich and emerging nations on curbing emissions.