They ask city government to stand at the side of poor people and people of color, rather than standing over them with a club. 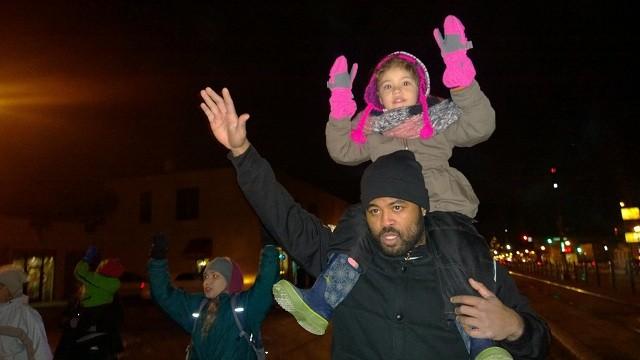 Hands up, don’t shoot: Demonstrators in Minneapolis. Image
from myfox9.com.

MINNEAPOLIS — For a couple of hours on Thursday, December 3, an action by a hundred or more brave souls was being televised live. It was thrilling. They began at a Burger King restaurant at 34th and Nicollet with a demonstration calling attention to the need to raise the minimum wage to $15 an hour, and, then, they marched down the freeway entrance to 35W and down 35W to City Hall.

Their protest turned to police brutality and, in particular, the refusal of grand juries to indict police officers in the deaths of two unarmed black young men: Michael Brown in Ferguson, Missouri, and Eric Garner in Staten Island.

A man driving a blue Subaru station wagon plowed into the group of demonstrators.

They were also defying freeway traffic to show they were not afraid of being hit by cars. On Tuesday, November 25, a group of demonstrators had gathered outside a Minneapolis police station after the announcement that the Ferguson, Misssouri, Grand Jury had no-billed police officer Darren Wilson — when a man driving a blue Subaru station wagon plowed into the group.

Jeffrey Patrick Rice, 40, drove directly into a crowd of demonstrators. He bumped them, hit them with his car, and knocked them down. He drove over the legs of a 16 year-old demonstrator. When he stopped, demonstrators beat on his car to keep him from driving his rear wheels over the demonstrator.

Rice drove forward again, hitting more demonstrators, breaking free of the crowd, and almost collided with another car in the intersection. He continued driving down Lake Street to St. Paul where he called 911 to report damage to his car from the demonstrators. The police came.

In their initial report the police called Rice the victim in the incident.

Soon after it had become obvious that everyone knew exactly what had happened, the police changed their report to list Rice as a suspect. 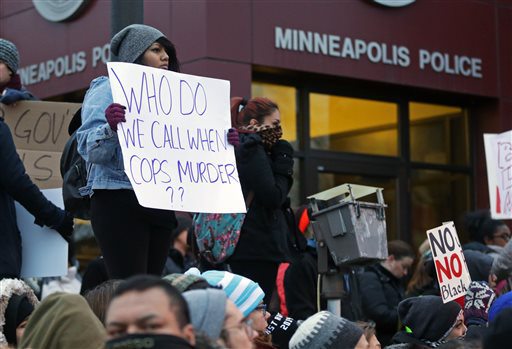 ABC affiliate KSTP had been filming the demonstration, and almost immediately a YouTube posting went viral.

The police have since presented their evidence to the Hennepin County Attorney.

The more recent action was disruptive, but it was nonviolent.

The more recent action, on December 3, was disruptive and it was an annoying interruption of traffic, but it was nonviolent. It didn’t destroy property, and its aim was to educate people about the seriousness of the problem of institutional racism in government.

The demonstrators were asking city government to stand at the side of poor people and people of color, rather than standing over them with a club.

Unfortunately, some of the drivers on 35W probably didn’t get the message. Many supported the demonstration, but others might have thought it was some college kid prank that made them late for an appointment or interfered with their deliveries. It’s very important for demonstrators to clearly attack real enemies.

When racist redlining causes mortgage foreclosures that destroy whole neighborhoods in North Minneapolis, then Wells Fargo and racist redlining is the enemy. When the City ends up paying a billion dollars over 30 years to subsidize a football stadium where most citizens can’t afford the price of the ticket, then racketeers like Minnesota Vikings owner Zygi Wilf are the enemy. When the City has to pay out a million dollars a year in claims because of the actions of a few bad police officers, then racist police officers are the enemy.

We have a right to expect our elected officials to support the people of Minneapolis against these enemies, and when they don’t, when our politicians make deals with the banks and big boys downtown, when good cops refuse to testify against bad cops, then we have to understand what’s happening. We have to criticize and call attention to the wrongdoing, and then we have to get rid of the rotten wood by using the mechanisms of elections and the law.