El Salvador : Human Rights Abuses and the Role of the US Government 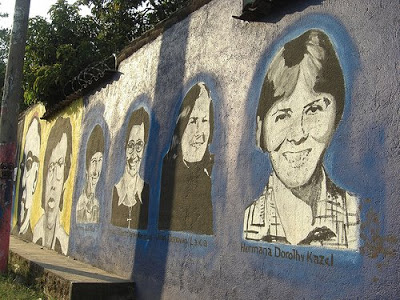 This mural of the “four churchwomen” is one of many in El Salvador that honors the martyrs who were killed while peacefully advocating for human rights during El Salvador’s violent Civil War. The churchwomen were asassinated by the National Guard on December 2, 1980. Human rights abuses, however, are not ancient history in El Salvador.
Report cites human rights violations and threat to 2009 elections.
By CISPES / October 14, 2008

A recently returned delegation to El Salvador has published a report on human rights abuses, the potential for fraud and intervention in the 2009 Salvadoran elections, and the role that the US government has played in the cited injustices.

The delegation was organized by the Committee in Solidarity with the People of El Salvador (CISPES) and was made up of 17 US citizens and residents. The introduction to the report explains its intended purpose of “offer[ing] elected officials, the media, and concerned citizens a description of the deterioration of human rights in El Salvador…[and] the potential impediments to true democracy faced by the Salvadoran people as they approach a crucial election period in their country.”

Callie Arnold, a delegate from Seattle, stated “We feel that US citizens and residents should be aware of and concerned by the injustices carried out in El Salvador — particularly the many that our government has a hand in — and we hope this report will get people talking, increase media coverage, and encourage elected officials to take action.” The Human Rights section of the report cites evidence that the existence of the International Law Enforcement Academy (ILEA) — a police training institution in San Salvador that is funded and administered by the US — has coincided with “an increase in repression, including arrest and torture of citizens involved in peaceful protests.”

The section of the report entitled “2009 Elections and the Electoral Process” further calls into question the role of the US government in the Central American country. It cites instances leading up to the 2004 presidential elections in El Salvador in which the US “interfered with the ability of Salvadorans to choose their preferred candidate.” It goes on to discuss “similar patterns of US political involvement in the period leading up to the 2009 elections.”

Andrew Kafel, a delegate from New York, says, “The current state of the economy in El Salvador is dire. The Central American Free Trade Agreement has devastated the country and the 2009 elections offer Salvadorans an opportunity to bring about democratic change that will better the state of their country. This is why it is so important that they be allowed to freely choose their next government.” On January 18, 2009, El Salvador will hold municipal and legislative elections; on March 15 presidential elections will take place. The leftist Farabundo Martí National Liberation Front (FMLN) holds a significant lead in presidential polls over the ruling right-wing Republican National Alliance (ARENA). Kafel went on, “It is clear the people of El Salvador want change and we believe it is of utmost importance that the US stay out of their elections and allow for self-determination.”

The report also describes a meeting with US Ambassador to El Salvador Charles Glazer as “a highly rhetorical and hostile propaganda exercise with the delegates.” Rosa Lozano, a delegate from Washington D.C., stated, “The Ambassador’s behavior and demeanor was troubling, but it was especially surprising that when directly asked about US involvement in the 2004 elections, he admitted that the US had intervened. That is why it is so important that this report be published and for US citizens and residents to pressure our government not to repeat this intervention in 2009.”

[CISPES is the Committee in Solidarity with the People of El Salvador.]

The complete report can be downloaded here.