Election of Judges : Only in America 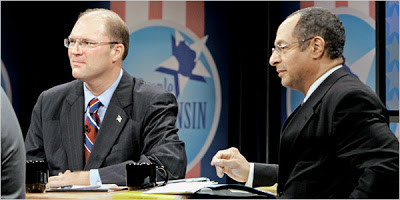 Michael J. Gableman, left, defeated Justice Louis B. Butler Jr. of the Wisconsin Supreme Court, right, after a campaign in which he falsely suggested Justice Butler had helped free a rapist.
American Exception
For American Judges, Rendering Justice, With One Eye on Re-election
By Adam Liptak / May 25, 2008

Last month, Wisconsin voters did something that is routine in the United States but virtually unknown in the rest of the world: They elected a judge.

The vote came after a bitter $5 million campaign in which a small-town trial judge with thin credentials ran a television advertisement falsely suggesting that the only black justice on the state Supreme Court had helped free a black rapist. The challenger unseated the justice with 51 percent of the vote, and will join the court in August.

The election was unusually hard-fought, with caustic advertisements on both sides, many from independent groups.

Contrast that distinctively American method of selecting judges with the path to the bench of Jean-Marc Baissus, a judge on the Tribunal de Grand Instance, a district court, in Toulouse, France. He still recalls the four-day written test he had to pass in 1984 to enter the 27-month training program at the École Nationale de la Magistrature, the elite academy in Bordeaux that trains judges in France.

“It gives you nightmares for years afterwards,” Judge Baissus said of the test, which is open to people who already have a law degree, and the oral examinations that followed it. In some years, as few as 5 percent of the applicants survive. “You come out of this completely shattered,” Judge Baissus said.

The question of how best to select judges has baffled lawyers and political scientists for centuries, but in the United States most states have made their choice in favor of popular election. The tradition goes back to Jacksonian populism, and supporters say it has the advantage of making judges accountable to the will of the people. A judge who makes a series of unpopular decisions can be challenged in an election and removed from the bench.

“If you want judges to be responsive to public opinion, then having elected judges is the way to do that,” said Sean Parnell, the president of the Center for Competitive Politics, an advocacy group that opposes most campaign finance regulation.

Nationwide, 87 percent of all state court judges face elections, and 39 states elect at least some of their judges, according to the National Center for State Courts.

In the rest of the world, the usual selection methods emphasize technical skill and insulate judges from the popular will, tilting in the direction of independence. The most common methods of judicial selection abroad are appointment by an executive branch official, which is how federal judges in the United States are chosen, and a sort of civil service made up of career professionals.

Outside of the United States, experts in comparative judicial selection say, there are only two nations that have judicial elections, and then only in limited fashion. Smaller Swiss cantons elect judges, and appointed justices on the Japanese Supreme Court must sometimes face retention elections, though scholars there say those elections are a formality.

“To the rest of the world,” Hans A. Linde, a justice of the Oregon Supreme Court, since retired, said at a 1988 symposium on judicial selection, “American adherence to judicial elections is as incomprehensible as our rejection of the metric system.”

“No other nation in the world does that,” she said at a conference on judicial independence at Fordham Law School in April, “because they realize you’re not going to get fair and impartial judges that way.”

The new justice on the Wisconsin Supreme Court is Michael J. Gableman, who has been the only judge on the Burnett County Circuit Court in Siren, Wis., a job he got in 2002 when he was appointed to fill a vacancy by Gov. Scott McCallum, a Republican.

The governor, who received two $1,250 campaign contributions from Mr. Gableman, chose him over the two candidates proposed by his advisory council on judicial selection. Judge Gableman, a graduate of Hamline University School of Law in St. Paul, went on to be elected to the circuit court position in 2003.

The much more rigorous French model, in which aspiring judges are subjected to a battery of tests and years at a special school, has its benefits, said Mitchel Lasser, a law professor at Cornell and the author of “Judicial Deliberations: A Comparative Analysis of Judicial Transparency and Legitimacy.”

“You have people who actually know what the hell they’re doing,” Professor Lasser said. “They’ve spent years in school taking practical and theoretical courses on how to be a judge. These are professionals.”

“The rest of the world,” he added, “is stunned and amazed at what we do, and vaguely aghast. They think the idea that judges with absolutely no judge-specific educational training are running political campaigns is both insane and characteristically American.”

But some American law professors and political scientists say their counterparts abroad should not be so quick to dismiss judicial elections.

“I’m not uncritical of the American system, and we obviously have excesses in terms of politicization and the campaign finance system,” said Prof. David M. O’Brien, a specialist in judicial politics at the University of Virginia and an editor of “Judicial Independence in the Age of Democracy: Critical Perspectives from Around the World.”

“But these other systems are also problematic,” Professor O’Brien continued. “There’s greater transparency in the American system.” The selection of appointed judges, he said, can be influenced by political considerations and cronyism that are hidden from public view.

“A simple explanation for our results,” wrote the paper’s authors — Stephen J. Choi, G. Mitu Gulati and Eric A. Posner — “is that electoral judgeships attract and reward politically savvy people, while appointed judgeships attract more professionally able people. However, the politically savvy people might give the public what it wants — adequate rather than great opinions, in greater quantity.”

Herbert M. Kritzer, who was until recently a professor of law and political science at the University of Wisconsin, said judicial elections had deep roots in the state and the nation.

“It’s a remnant of the populist Jacksonian image of public office,” he said. “We’re crazy about elections. The number of different offices we elect is enormous.”

There is reason to think, though, that the idea of popular control of the government associated with President Andrew Jackson is an illusion when it comes to judges. Some political scientists say voters do not have anything near enough information to make sensible choices, in part because most judicial races rarely receive news coverage. When voters do have information, these experts say, it is often from sensational or misleading television advertisements.

“You don’t get popular control out of this,” said Steven E. Schier, a professor of political science at Carleton College in Minnesota. “When you vote with no information, you get the illusion of control. The overwhelming norm is no to low information.”

Still, judges often alter their behavior as elections approach. A study in Pennsylvania by Gregory A. Huber and Sanford C. Gordon found that “all judges, even the most punitive, increase their sentences as re-election nears,” resulting in some 2,700 years of additional prison time, or 6 percent of total prison time, in aggravated assault, rape and robbery sentences over a 10-year period.

In common law countries, judges are generally appointed by executive branch officials, though lately judicial commissions made up of lawyers and lay people are taking a larger role in the initial selection of candidates. Scotland adopted that method in 2002, and England and Wales in 2006.

Alan Paterson, a Scottish law professor who serves on the Judicial Appointments Board for Scotland, said his country’s system was transparent and worked well, though he acknowledged that the idea behind judicial elections was attractive.

“Part of me likes it,” he said. “It follows from the separation of powers. But in practical terms, it’s very difficult. They have to raise a lot of money.”

“The theory is a nice theory,” he said. “The practice of it is unworkable. We’re not going to do it.”

In some nations, of course, the judiciary is neither independent nor accountable to the public.

“Take a country like Vietnam,” Professor O’Brien said. “Those poor judges are controlled by party officials even at the trial level. That’s even worse than we have in Pennsylvania, Ohio and Texas, where the cost of judicial campaigns has just escalated over the last couple of decades.”

Judge Gableman did not respond to phone messages seeking comment. In answer to a question about his qualifications in an online forum on The Milwaukee Journal Sentinel’s Web site, he acknowledged that he had no appellate court experience but said he had argued a case, concerning zoning, before the state Supreme Court.

In the recent election, Judge Gableman’s campaign ran a television advertisement juxtaposing the images of his opponent, Justice Louis B. Butler Jr., in judicial robes, with a photograph of Ruben Lee Mitchell, who had raped an 11-year-old girl. Both the judge and the rapist are black.

“Butler found a loophole,” the advertisement said. “Mitchell went on to molest another child. Can Wisconsin families feel safe with Louis Butler on the Supreme Court?”

Justice Butler had represented Mr. Mitchell as a lawyer 20 years before and had persuaded two appeals courts that his rape trial had been flawed. But the state Supreme Court ruled that the error was harmless, and it did not release the defendant, as the advertisement implied. Instead, Mr. Mitchell served out his full term and only then went on to commit another crime.

In an interview, Justice Butler — a graduate of the University of Wisconsin law school who served for 12 years as a judge in Milwaukee courts — said the past few months had tested his commitment to elections.

“My position historically has been that there is something to be said for the public to be selecting people who are going to be making decisions about their futures,” Justice Butler said.

“But people ought to be looking at judges’ ability to analyze and interpret the law, their legal training, their experience level and, most importantly, their impartiality,” he continued. “They should not be making decisions based on ads filled with lies, deception, falsehood and race-baiting. The system is broken, and that robs the public of their right to be informed.”

Judge Baissus, the French judge, said his nation had once considered electing its judiciary.

“It’s an argument that was largely debated after the French revolution,” he said. “It was thought not to be a good idea. People seeking re-election would not be independent. They are indeed close to the electorate, but sometimes uncomfortably so.”

This is part of a series of articles by Adam Pitak on the American Justice System. Go here for links to the other articles.

This entry was posted in RagBlog and tagged American Society, Criminal Justice. Bookmark the permalink.