Europe Blames US for Financial Crisis; Failure of Government Oversight 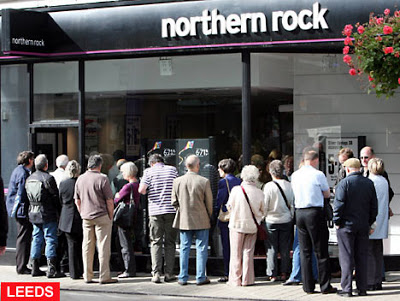 LONDON – Financial firms are reeling in the United Kingdom, Ireland, and the Netherlands. Iceland is on the brink of national bankruptcy. A continent that has enjoyed steady growth for years is watching it all melt away.

And everyone is pointing the finger of blame across the Atlantic Ocean.

In the financial district of London, the pubs of Dublin, and on the campuses of Holland, people are citing reckless lending in the US mortgage market, unbridled American consumption, and a lack of government oversight for the financial meltdown that has engulfed Europe. Many dismiss the US bailout as an unwise and hypocritical move that rewards the greedy bankers who caused the crisis and breaches the ideals of the country that pioneered market-driven capitalism.

“It seems to me that the US government supports the people that least deserve it,” said Sanne Castro, 28, a student at the Delft University of Technology in the Netherlands. “But it does prove that even the most hard-core free-market capitalists would rather turn in their fundamental beliefs than their money.”

Europeans are watching the value of their investments plummet, their banks collapse, their ability to borrow or get a mort gage diminish, their currency slide, and their job security become more fragile than ever. In short, they look just as shell-shocked as Americans.

The financial free fall in Europe is, in part, due to a shift in economic philosophy by the major European nations, said William Keylor, director of the International History Institute at Boston University. European nations, seeking to emulate the formula for growth and financial innovation that has propelled the American economy, gave up tight control over financial markets and privatized formerly state-run major industries, such as gas and transportation. When stock markets were advancing and economies were growing, Europeans embraced the changes, Keylor said. But the current crisis has caused many to have second thoughts. Now, some are insisting that the Europeans had it right all along, and government ownership would have limited the risks and curbed the catastrophes now enveloping the region.

“It is hard for them to play the ‘blame game’ when they chose this path freely and continued to follow it when times were good,” Keylor said.

It is clear that times have changed.

The Euro Stoxx 50 Index, which measures 50 European blue-chip stocks, plunged 22 percent just in the past week, mirroring precipitous drops in exchanges in London, Germany, and Paris. As the panic spreads across oceans and national borders, many Europeans are criticizing US leaders for not doing enough to stabilize the global market.

Even British Prime Minister Gordon Brown took a swipe at Americans as he proposed his government’s own roughly $800 billion bailout of its banks earlier this week.

“This problem started in America with irresponsible actions and lending by some institutions,” Brown told a press conference on Wednesday. “The global financial market has ceased to function.”

The anger marks a drastic change among Europeans, who gleefully looked on as the early stages of the US crisis seemed to show the weaknesses of America’s unfettered capitalism, according to Nigel Gault, an economist at Global Insight in Lexington, Mass. But as the economic storm has ripped through Europe, schadenfreude is being replaced by anger.

The most severe excesses came from America, Gault said, but the greed and reckless behavior weren’t confined to the United States, Gault said. Although European banks were much more conservative, their lending policies fueled housing booms in parts of the United Kingdom, Spain, and Ireland that are now going bust. And some European banks, including a state-owned firm in Germany, held billions of dollars in risky mortgage-backed securities.

“Is that America’s fault for selling them toxic assets?” Gault said. “Or Europe’s fault for not more thoroughly investigating just what they were buying?”

Some Europeans, noting the response of the Bush administration to Wall Street’s woes, have chided US leaders who have railed against the European model of managed capitalism for suddenly embracing government intervention in the financial sector.

“These people were the first to state that government regulation in the market is in the long run bad for the economy, for example when it comes to environmental laws, social welfare, and of course Wall Street,” Castro said. “And what are they doing now?”

In London, the wreckage of the US crisis looms over Canary Wharf, the city’s new financial district. A skyscraper here until recently was the main office of Lehman Brothers. At a nearby Starbucks, next to what used to be the headquarters of First Boston Bank, Alastair Green, 50, an investment banker, expressed concern about the relentless market mayhem.

“Everybody assumes there is a solution out there,” Green said. “But what if there’s not?”

Emily Springford, a lawyer who specializes in bankruptcy and insolvency litigation in London, said it’s obvious the United States is the main driver behind the current upheaval here, but Europe cannot escape blame entirely. She supports the US bailout because it was “necessary to take action,” but says British leaders are doing a better job at protecting the people’s interests.

“There is still a sense of disbelief here about how fast the crisis is spreading,” Springford said.

The question for European leaders, Keylor said, is whether the crisis will cause them to reconsider American-style capitalism.

But for Phillip Massey, an information-technology worker in Dublin, the question is not what Europe can do for itself, but whether the American bailout of its financial institutions will mean a worldwide recovery.

“When America sneezes, the whole world catches a cold,” Massey said. “But chicken soup and home remedies aren’t going to fix this one. The world as a whole needs treatment.”

Globe correspondent Michael Goldfarb contributed to this report. Jenn Abelson can be reached at abelson@globe.com.