Fran Clark : Keeping Watch on the ‘School of Assassins’ 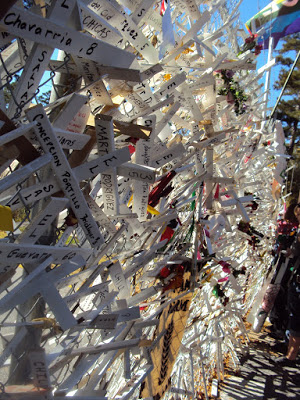 One at a time, marchers place their crosses in the chain link fence outside Fort Benning in Columbus, Georgia. Photos by Heidi Turpin / The Rag Blog.
By any other name:
Protesters keep watch at
the ‘School of Assassins’

Each cross has the name of one of the thousands murdered or disappeared throughout Latin America during decades of violence and oppression.

FORT BENNING — In the chilly morning air of Columbus, Georgia, on Sunday, November 18, outside the gates of Fort Benning, people gather early. Most hold crosses, either made before arriving or picked up from the pile made for years past.

Each cross has the name (or other identification, such as “infant girl”) of one of the thousands murdered or disappeared throughout Latin America during decades of violence and oppression, sometimes referred to as “the dirty wars.”

From Bolivia to Panama to Guatemala and El Salvador, religious workers, labor organizers, student groups, or anyone working in sympathy with the poor, were targets of assassination, mass killings, and torture.

Many of those responsible for these acts received training at the School of the Americas, located behind the gates outside which we are gathered. Originally established in Panama in 1946, the SOA moved to Fort Benning in 1984. It has trained over 60,000 members of Latin American militaries, and has been widely criticized for the human rights abuses of its graduates.

Documented atrocities include the murders of Archbishop Oscar Romero and the rape and murders of four U.S. church women in El Salvador. Priests, nuns, labor leaders, women, children, and entire communities have been massacred at the hands of SOA-trained military forces. 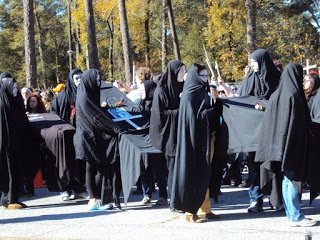 Among the most notorious graduates are Manuel Noriega of Panama, Rios Montt of Guatemala, and Hugo Banzer Suarez of Bolivia. SOA trained soldiers in Mexico have been implicated in the murders and disappearances of over 50,000 people since 2006. In Honduras, SOA graduates carried out the 2009 coup and continue a campaign of violence and murder against the resistance.

In 1996 the Pentagon admitted that the school’s training manuals advocated torture, execution, and blackmail. But, despite these admissions, not a single U.S. official has been held accountable. In 2000, after another close vote in the U.S. House on whether to close the school failed, the school’s name was changed to the Western Hemisphere Institute for Security Cooperation (WHINSEC). But, the atrocities continue, as does the work of the SOA Watch to close the “School of  Assassins.”

SOA Watch has held vigils at Fort Benning each year since its founding in 1990 by Father Roy Bourgeois. The weekend-long series of events include outstanding music, workshops, auctions, and profound testimonies from those directly affected by the violence carried out in their home countries.

The crowds have varied in size, but, there is always an eclectic mix of young and old, nuns and college students. (One college group sleeps on the stage each night to watch over it!) 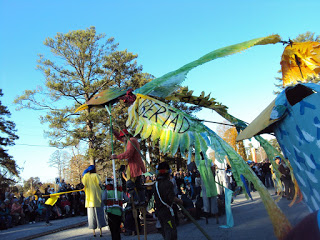 The spirit is always the same. Mourners with white painted faces and red tears carry coffins. The names of the dead are read in liturgical style; marchers in the procession raise their crosses and sing “presente” as each name is read. Each marcher approaches the fence which denies access to the fort, stabs her cross through the chain links, and leaves it as a memorial, along with hundreds of others.

Some leave flowers, photos, and banners. Some sit down to cry, some meditate, and each year at least one is called to commit an act of civil disobedience by “crossing the line.” In years past, this meant simply stepping onto military property. Now, it means scaling a tall fence topped with barbed wire and dropping down on the other side to face an almost certain six-month sentence in federal prison.

As the procession ends and all marchers have placed their crosses, the mourners are called to “return to life” as the uplifting music begins, and the Puppetistas perform their pageant. Many dance joyously as they prepare to return to their communities and rededicate themselves to the work for justice in the Americas and beyond.

[Fran Clark is a community health nurse who is active with CodePink Austin and the Texas Jail Project. She has also been involved with the GI Rights Hotline, Under the Hood Cafe, and the Hutto Visitation Program.]

1 Response to Fran Clark : Keeping Watch on the ‘School of Assassins’