From Those Who Know : Torture Just Doesn’t Work 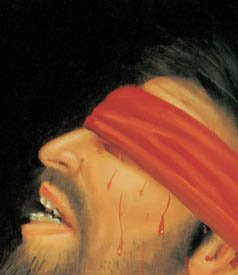 George W. Bush defended harsh interrogations by pointing to intelligence breakthroughs, but a surprising number of counterterrorist officials say that, apart from being wrong, torture just doesn’t work. Delving into two high-profile cases, the author exposes the tactical costs of prisoner abuse. This article was originally published by Vanity Fair on Dec. 16, 2008 and was also distributed by truthout.

By the last days of March 2002, more than six months after 9/11, President George W. Bush’s promise “to hunt down and to find those folks who committed this act” was starting to sound a little hollow. True, Afghanistan had been invaded and the Taliban toppled from power. But Osama bin Laden had vanished from the caves of Tora Bora, and none of his key al-Qaeda lieutenants were in U.S. captivity. Intelligence about what the terrorists might be planning next was almost nonexistent. “The panic in the executive branch was palpable,” recalls Mike Scheuer, the former C.I.A. official who set up and ran the agency’s Alec Station, the unit devoted to tracking bin Laden.

Early in the morning of March 28, in the moonlit police-barracks yard in Faisalabad, Pakistan, hopes were high that this worrisome intelligence deficit was about to be corrected. Some 300 armed personnel waited in silence: 10 three-man teams of Americans, drawn equally from the C.I.A. and the F.B.I., together with much greater numbers from Pakistan’s police force and Inter-services Intelligence (ISI). In order to maximize their chances of surprise, they planned to hit 10 addresses simultaneously. One of them, they believed, was a safe house containing a man whose name had been familiar to U.S. analysts for years: Zayn al-Abidin Muhammad Hussein, a 30-year-old Saudi Arabian better known as Abu Zubaydah. “I’d followed him for a decade,” Scheuer says. “If there was one guy you could call a ‘hub,’ he was it.”

The plan called for the police to go in first, followed by the Americans and ISI men, whose job would be to gather laptops, documents, and other physical evidence. A few moments before three a.m., the crackle of gunfire erupted. Abu Zubaydah had been shot and wounded, but was alive and in custody. As those who had planned it had hoped, his capture was to prove an epochal event – but in ways they had not envisaged.

Four months after Abu Zubaydah’s capture, two lawyers from the Department of Justice, John Yoo and Jay Bybee, delivered their notorious memo on torture, which stated that coercive treatment that fell short of causing suffering equivalent to the pain of organ failure or death was not legally torture, an analysis that – as far as the U.S. government was concerned – sanctioned the abusive treatment of detainees at the C.I.A.’s secret prisons and at Guantánamo Bay. But, as Jane Mayer writes in her recent book, The Dark Side (Doubleday), Abu Zubaydah had been subjected to coercive interrogation techniques well before that, becoming the first U.S. prisoner in the Global War on Terror to undergo waterboarding.

The case of Abu Zubaydah is a suitable place to begin answering some pressing but little-considered questions. Putting aside all legal and ethical issues (not to mention the P.R. ramifications), does such treatment – categorized unhesitatingly by the International Committee of the Red Cross as torture – actually work, in the sense of providing reliable, actionable intelligence? Is it superior to other interrogation methods, and if they had the choice, free of moral qualms or the fear of prosecution, would interrogators use it freely?

President Bush has said it works extremely well, insisting it has been a vital weapon in America’s counterterrorist arsenal. Vice President Dick Cheney and C.I.A. director Michael Hayden have made similar assertions. In fact, time and again, Bush has been given opportunities to distance his administration from the use of coercive methods but has stood steadfastly by their use. His most detailed exposition came in a White House announcement on September 6, 2006, when he said such tactics had led to the capture of top al-Qaeda operatives and had thwarted a number of planned attacks, including plots to strike U.S. Marines in Djibouti, fly planes into office towers in London, and detonate a radioactive “dirty” bomb in America. “Were it not for this program, our intelligence community believes that al-Qaeda and its allies would have succeeded in launching another attack against the American homeland. By giving us information about terrorist plans we could not get anywhere else, this program has saved innocent lives.”

Really? In researching this article, I spoke to numerous counterterrorist officials from agencies on both sides of the Atlantic. Their conclusion is unanimous: not only have coercive methods failed to generate significant and actionable intelligence, they have also caused the squandering of resources on a massive scale through false leads, chimerical plots, and unnecessary safety alerts – with Abu Zubaydah’s case one of the most glaring examples.

Here, they say, far from exposing a deadly plot, all torture did was lead to more torture of his supposed accomplices while also providing some misleading “information” that boosted the administration’s argument for invading Iraq.

Everything that was to go wrong with the interrogation of Abu Zubaydah flowed from a first, fatal misjudgment. Although his name had long been familiar to the C.I.A., that did not make him an operational terrorist planner or, as Bush put it in September 2006, “a senior terrorist leader and a trusted associate of Osama bin Laden.” Instead, Scheuer says, he was “the main cog in the way they organized,” a point of contact for Islamists from many parts of the globe seeking combat training in the Afghan camps. However, only a tiny percentage would ever be tapped for recruitment by al-Qaeda.

According to Scheuer, Abu Zubaydah “never swore bayat [al-Qaeda’s oath of allegiance] to bin Laden,” and the enemy he focused on was Israel, not the U.S. After Abu Zubaydah’s capture, Dan Coleman, an F.B.I. counterterrorist veteran, had the job of combing through Abu Zubaydah’s journals and other documents seized from his Faisalabad safe house. He confirms Scheuer’s assessment. “Abu Zubaydah was like a receptionist, like the guy at the front desk here,” says Coleman, gesturing toward the desk clerk in the lobby of the Virginia hotel where we have met. “He takes their papers, he sends them out. It’s an important position, but he’s not recruiting or planning.” It was also significant that he was not well versed in al-Qaeda’s tight internal-security methods: “That was why his name had been cropping up for years.”

Declassified reports of legal interviews with Abu Zubaydah at his current residence, Guantánamo Bay, suggest that he lacked the capacity to do much more. In the early 1990s, fighting in the Afghan civil war that followed the Soviet withdrawal, he was injured so badly that he could not speak for almost two years. “I tried to become al-Qaeda,” Abu Zubaydah told his lawyer, Brent Mickum, “but they said, ‘No, you are illiterate and can’t even remember how to shoot.'” Coleman found Abu Zubaydah’s diary to be startlingly useless. “There’s nothing in there that refers to anything outside his head, not even when he saw something on the news, not about any al-Qaeda attack, not even 9/11,” he says. “All it does is reveal someone in torment. Based on what I saw of his personality, he could not be what they say he was.”

In May 2008, a report by Glenn Fine, the Department of Justice inspector general, stated that, as he recovered in the hospital from the bullet wounds sustained when he was captured, Abu Zubaydah began to cooperate with two F.B.I. agents. It was a promising start, but “within a few days,” wrote Fine, he was handed over to the C.I.A., whose agents soon reported that he was providing only “throw-away information” and that, according to Fine, they “needed to diminish his capacity to resist.” His new interrogators continued to question him by very different means at so-called black-site prisons in Thailand and Eastern Europe. They were determined to prove he was much more important than the innkeeper of a safe house.

Bush discussed Abu Zubaydah’s treatment in his 2006 announcement. “As his questioning proceeded, it became clear that he had received training on how to resist interrogation. And so the C.I.A. used an alternative set of procedures….. The procedures were tough, and they were safe, and lawful, and necessary.” Soon, Bush went on, Abu Zubaydah “began to provide information on key al-Qaeda operatives, including information that helped us find and capture more of those responsible for the attacks on September 11.” Among them, Bush said, were Khalid Sheikh Mohammed, the alleged 9/11 mastermind, and his fellow conspirator Ramzi Binalshibh. In fact, Binalshibh was not arrested for another six months and K.S.M. not for another year. In K.S.M.’s case, the lead came from an informant motivated by a $25 million reward.

As for K.S.M. himself, who (as Jane Mayer writes) was waterboarded, reportedly hung for hours on end from his wrists, beaten, and subjected to other agonies for weeks, Bush said he provided “many details of other plots to kill innocent Americans.” K.S.M. was certainly knowledgeable. It would be surprising if he gave up nothing of value. But according to a former senior C.I.A. official, who read all the interrogation reports on K.S.M., “90 percent of it was total fucking bullshit.” A former Pentagon analyst adds: “K.S.M. produced no actionable intelligence. He was trying to tell us how stupid we were.”

It is, perhaps, a little late, more than six years after detainees began to be interrogated at Guantánamo Bay and at the C.I.A.’s black-site prisons, to be asking whether torture works. Yet according to numerous C.I.A. and F.B.I. officials interviewed for this article, at the time this question really mattered, in the months after 9/11, no one seriously addressed it. Those who advocated a policy that would lead America to deploy methods it had always previously abhorred simply assumed they would be worthwhile. Non-governmental advocates of torture, such as the Harvard legal scholar Alan Dershowitz, have emphasized the “ticking bomb” scenario: the hypothetical circumstance when only torture will make the captured terrorist reveal where he – or his colleagues – has planted the timed nuclear device. Inside the C.I.A., says a retired senior officer who was privy to the agency’s internal debate, there was hardly any argument about the value of coercive methods: “Nobody in intelligence believes in the ticking bomb. It’s just a way of framing the debate for public consumption. That is not an intelligence reality.”

Read all of this article here.