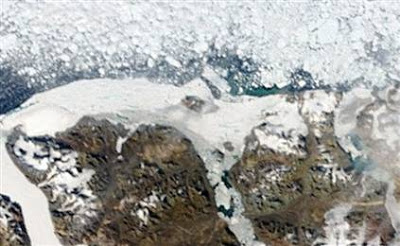 In a development consistent with climate change theories, the enormous icy plain broke free sometime last week and began slowly drifting into the Arctic Ocean. The piece had been a part of the shelf for 3,000 years.

Temperatures in large parts of the Arctic have risen far faster than the global average in recent decades.

The ice broke away from the shelf on Ward Hunt Island, a small island just off giant Ellesmere Island in one of the northernmost parts of Canada.

It was the largest fracture of its kind since the nearby Ayles Ice Shelf — which measured 25 square miles — broke away in 2005.

Scientists had earlier identified deep cracks in the Ward Hunt Ice Shelf, which measures around 155 square miles. The shelf is one of five along Ellesmere Island in the northern Arctic.

“Because the breakoff occurred between two large parallel cracks they’re thinking more could go this summer before the freeze sets in,” said Trudy Wohlleben of the Canadian Ice Service. “More could be a piece as large as the Ayles Ice Shelf.”

Ellesmere Island was once home to a single enormous ice shelf totaling around 3,500 square miles. All that is left of that shelf today are five much smaller shelves that together cover just under 400 square miles.

“The breakoff is consistent with other changes we’ve seen in the area, such as the reduction in the amount of sea ice, the retreat of the glaciers and the breakup of other ice shelves,” Wohlleben said.

She said a likely reason for the shelf breaking away was a strong wind from the south.

Warwick Vincent, director of the Centre for Northern Studies at Laval University in Quebec, said much of the remaining Ward Hunt Ice Shelf is now in a vulnerable state.

“It underscores the fact that each year we’re now crossing new thresholds in environmental change in the High Arctic, and of course our concern in the longer term is that these may signal the onset of serious change at all latitudes, much further to the south, for example,” he told Reuters.

Derek Mueller, an Arctic ice shelf specialist at Trent University in Ontario, said he was concerned by the rapidity of changes in the High Arctic over the last few years.

“It’s a bit of a wake-up call for those people who aren’t yet affected by climate change that there are places on Earth that are, and the same could be true for them (these people) if you fast-forward a decade or two or three,” he said.

‘No longer … in balance’

Mueller initially estimated that 1.5 square miles of ice had broken off the shelf but increased that figure to eight square miles after studying the data more closely.

“Whatever has kept this ice shelf in balance for 3,000 years is no longer keeping it in balance,” he told Reuters, saying he too would not be surprised to see more ice breaking away from the Ward Hunt shelf this year.

Wohlleben said the ice shelves, which contained unique ecosystems that had yet to be studied, would not be replaced because they took so long to form.

“Once they’ve broken off they’re gone,” she said.

Mueller was careful not to blame the Ward Hunt breakup specifically on climate change, but said it is consistent with the theory. The current Arctic climate certainly isn’t reinforcing ice shelves.

“We’re in a different climate now,” he said. “It’s not conducive to regrowing them. It’s a one-way process.”

A crack in the shelf was first spotted in 2002. Last April, a patrol of Canadian Rangers found the weakness had spread into an extensive network of cracks, some 40 yards wide and 11 miles long. The crack-riddled section of ice was like a jigsaw puzzle, with the pieces held in place only by each other.

Formed by accumulating snow and freezing meltwater, ice shelves are large platforms of thick, ancient sea ice that float on the ocean’s surface. Ellesmere Island was once entirely ringed by a single enormous ice shelf that broke up in the early 1900s.

At 170 square miles in size and 40 yards thick, the Ward Hunt shelf is the largest of those remnants — even bigger than the Antarctic shelf that collapsed earlier this year and seven times the size of the Ayles Ice Shelf chunk that broke off in 2005 from Ellesmere’s western coast.

Despite a period of stability in the 1980s, the Ward Hunt shelf and its characteristic corrugated surface has been steadily declining since the 1930s, said Mueller. Its southern edge has lost seven square miles over the last six years.

It’s the same all over the Arctic, said Gary Stern, co-leader of a major international research program on sea ice.

Speaking from the Coast Guard icebreaker Amundsen in Canada’s north, Stern said the Ward Hunt breakup is related to what he’s seeing thousands of miles away.

He hasn’t seen any ice in weeks. Plans to set up an ice camp last February had to be abandoned when usually dependable ice didn’t form for the second year in a row.

“Nobody on the ship is surprised anymore,” said Stern. “We’ve been trying to get the word out for the longest time now that things are happening fast and they’re going to continue to happen fast.”

Many scientists now believe that the Arctic will have ice-free summers by 2013 instead of 2030 as predicted by the International Panel on Climate Change.

“It’s all connected to the warming climate. Everything is connected together,” Stern said.