Though some reform ideas have merit, the real problem is lack of funding from the government. 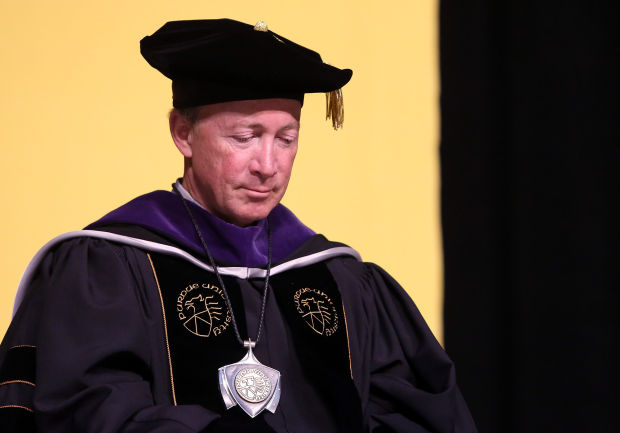 WEST LAFAYETTE, Indiana — Purdue University President Mitch Daniels testified March 17, 2015, before a subcommittee of the House of Representatives Committee on Education and Workforce on what he calls higher education reform. He also spoke during that week to the American Council on Education and the Brookings Institute.

A centerpiece of his recommendations was “income share agreements” whereby students partner with investors, particularly alumni, who would provide funds for their education in exchange “for a small share of the student’s future income.”

Daniels was touting this idea in addition to new cost-saving policies at Purdue University, such as offering three-year degree programs, using different metrics rather than course hours to measure student preparation, and tuition freezes. He has also urged a reduction in costly federal regulations.

Although some of Daniels’ proposals and programs at his home university have merit, the conversation he and other administrators around the country are having about rising tuition and the accumulation of years of debt ignore the major reason why costs and tuition are rising. In addition to the cost of higher education attributable to increased faculty salaries, layers of new administrators, and the creation of new luxury amenities to attract students (housing, food, and recreational facilities), tuition has risen because state government financing of higher education has not kept pace with expenditures.

‘Funding cuts have led to both steep tuition increases and spending cuts that may diminish the quality of education.’

The Center for Budget and Policy Priorities issued a report on May 1, 2014 (“States Are Still Funding Higher Education Below Pre-Recession Levels”), which provides data to show that higher education funding remains below 2007-2008 pre-recession levels in 48 of 50 states. This means, according to CBPP, that “the large funding cuts have led to both steep tuition increases and spending cuts that may diminish the quality of education available to students at a time when a highly educated workforce is more crucial than ever to the nation’s economic future.”

CBPP reports that since 2007-2008 state spending on higher education is down 23 percent, or $2,026 per student. Tuition increases have been substantial in public colleges and universities from fiscal year 2008 to 2014, ranging from $253 in Montana to $4,493 in Arizona. In Indiana tuition increased by $1,191 during this period.

CBPP notes that in 1988 colleges and universities received 3.2 times more of their revenue from state and local governments than from students. That ratio declined to about 1.1 times more from government supports than tuition in 2013. Put another way the report states:

Nearly every state has shifted costs to students over the last 25 years — with the most drastic shift occurring since the onset of the recession… Today, tuition revenue now outweighs government funding for higher education in 23 states…

Not surprisingly, Daniels’ idea that students find a rich supporter in exchange for future student earnings came from proposals made by free market advocate Milton Friedman in the 1980s. Friedman, the University of Chicago economist, was the most significant descendent of so-called “free market” economists who believe as did President Reagan that “government was not the solution; government was the problem.”

The privatization of all education is on the agenda of wealthy conservatives such
as the Koch brothers.

From the vantage point of 2015, the privatization of all education, including higher education, is on the agenda of wealthy conservatives such as the Koch brothers and the powerful state legislative lobbying organization, the American Legislative Exchange Council (ALEC). ALEC funds state politicians who support the elimination of public institutions, such as education.

Naomi Klein, author of The Shock Doctrine: The Rise of Disaster Capitalism, argued that during periods of economic or political crisis, changes have been introduced to weaken government and the maintenance of public services. The CBPP data suggests that the deep recession of 2008-2011 was an occasion for ALEC and the politicians and educators they support to reduce resources available for higher education.

Despite the long history of government support for higher education, public schools from kindergarten through high school, libraries, roads, and police and fire-fighting services, the recession offered the occasion for influential and wealthy elites to pressure for policies that reduced state financial support for public services and a shift toward their privatization. In addition universities became even more dependent on big corporations, banks, and the military. Finally, tuition increased and students had to pay a higher share of the cost of their education.

Throughout much of U.S. history public education has been seen as a public good.

Throughout much of U.S. history public education, including higher education, has been seen as a public good. The land grant system of public higher education was instituted in 1862. From then until the recent recession, public colleges and universities educated large percentages of the young and generated much of the scientific and technical knowledge that stimulated the U.S. economy, based on substantial public support and low student tuition.

After World War II, returning veterans became eligible for free higher education under the GI Bill. The program led to the training and credentialing of a whole generation of young people who went on to become educators and researchers, and also consumers of products manufactured after the war. The so-called economic “golden age,” from 1945 until the 1970s, was driven by research and development initiated by GI Bill recipients. These college graduates became members of the largest middle class in American history.

As Bob Samuels, author of Why Public Higher Education Should Be Free, put it:

“I actually believe that we should and could make all public higher education completely free. We’re currently spending around $185 billion on higher education annually—which includes spending on for-profit schools, which have very low graduation rates and high debt rates, as well as on merit aid for wealthy students. Given current enrollment, I estimate that it would cost about $155 billion to fund public colleges and four-year institutions completely. My argument is instead of funding the individuals, we should just fund the institutions directly” (quoted in Rebecca Burns, “Why Can’t College Be Free?” In These Times, June 13, 2014).

However, advocates of “higher education reform,” at least those collaborating with economic and political elites who advocate policies depriving government of financial resources, sometimes called “starving the beast,” envision a day when all public institutions are privatized.

There is much evidence that the privatization of education will increase gaps between rich and poor and may leave the latter with inferior educations. The Daniels plan will rely on wealthy benefactors to support students while tuition costs continue to rise and those who still seek a college education will continue to accumulate a lifetime of debt.

Without a return to affordable publicly supported higher education, large proportions of young, intellectually curious, and talented students may be deterred from pursuing higher education which will have negative consequences for the entire society.