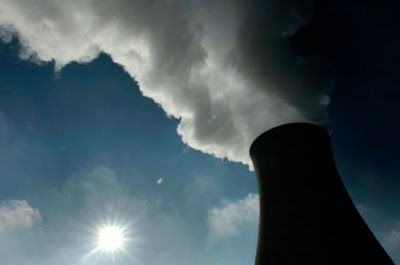 Steam plumes rise from cooling tower at Fermi2 Nuclear Power Plant on the shore Lake Erie. Photo by Alexander Cohn / Bay City Times.
Will nukes be next?
Apocalypse (in the Gulf) Now

As BP’s ghastly gusher assaults the Gulf of Mexico and so much more, a tornado has forced shut the Fermi2 atomic reactor at the site of a 1966 meltdown that nearly irradiated the entire Great Lakes region.

If the White House has a reliable plan for deploying and funding a credible response to a disaster at a reactor that’s superior to the one we’ve seen at the Deepwater Horizon, we’d sure like to see it.

Meanwhile it wants us to fund two more reactors on the Gulf and another one 40 miles from Washington, DC. And that’s just for starters.

The Nuclear Regulatory Commission has warned that at least one new design proposed for federal funding cannot withstand tornadoes, earthquakes or hurricanes.

But the administration has slipped $9 billion for nuclear loan guarantees into an emergency military funding bill, in addition to the $8.33 it’s already approved for two new nukes in Georgia.

Unless we do something about it, the House Appropriations Committee may begin the process next week.

Like Deepwater Horizon and Fermi, these new nukes could ignite disasters beyond our technological control — and our worst nightmares.

Like BP, their builders would enjoy financial liability limits dwarfed by damage they could do.

Two of the new reactors are proposed for South Texas, where two others have already been leaking radiation into the Gulf. Ironically, oil pouring into the Gulf could make the waters unusable for cooling existing and future nukes and coal burners.

Energy Secretary Steven Chu recently admitted to Rachel Maddow he has no firm plans for the radioactive wastes created by the proposed new reactors, or by the 104 currently licensed.

That would include Vermont Yankee, where strontium, cesium, tritium, and more are leaking into the Connecticut River. VY’s rotted underground pipes may have leaking counterparts at every other U.S. reactor.

The Gulf gusher bears the simple lesson that technologies that require liability limits will rapidly exceed them, and must not be deployed.

No U.S. nuclear utility has sufficient capital resources to cover the damages from a reactor disaster, which is one reason taxpayers are targeted as the ultimate underwriters.

On May 27, the House Appropriations Committee was scheduled to vote on new nuke loan guarantees, which had been attached to an emergency military spending bill. Amidst a flood of grassroots opposition, the vote was postponed.

But it could return as early as June 15. We can and must stop these new guarantees, which would feed the gusher of nuke power handouts being dumped into new climate/energy legislation.

By all accounts, despite the horrors of the Gulf, the administration still wants legislation that will expand deepwater drilling and atomic technologies that are simply beyond our control… but that fund apparently unstoppable dividends for corporations like BP.

It’s our vital responsibility to transform this crisis into a definitive shift to a totally green-powered earth, based solely on renewables and efficiency. We have a full array of Solartopian technologies that are proven, profitable, insurable, and manageable. They are the core of our necessary transition to a prosperous, sustainable future.

As our planet dies around us, truly green climate/energy legislation must come… NOW! The next key vote may come when the Appropriations Committee reconvenes.

Make sure your voice is heard. It’s all we have.

[Harvey Wasserman’s Solartopia! Our Green-Powered Earth, is at www.harveywasserman.com. He is senior advisor to Greenpeace USA and senior editor of www.freepress.org.]