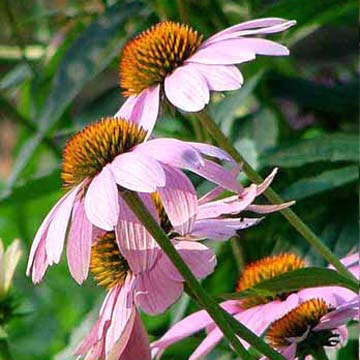 Echinacea purpurea: Academic studies say it doesn’t work.
‘To dismiss alternative medicine too quickly is to miss a central question: What is the role of health care?’
By Kent Sepkowitz

Few things rankle doctors more than alternative (aka complementary, integrative, holistic, homeopathic, naturopathic) medicine. First came the misery inflicted by the ever-expanding celebrity of practitioners like Andrew Weil and Gary Null (and, for a while, even Radovan Karadzic). And now there is the arrival at the NIH feeding trough of the alternative medicine crowd, angling for a mouthful of the same research dollars that currently fund investigations like “the structural basis for translation termination on the 70S ribosome.”

Though initially caught flat-footed, academic medicine rallied, as it always does when big bucks are on offer. After decades of belittling the alternative folk as a bunch of snake-oil salesmen and sleazeballs, academic medical centers suddenly realized that—guess what—they were big fans of the approach all along. Yale University is one of the latest brand-name institutions to go through the change. Last year, it joined 40 other medical schools in the Consortium of Academic Health Centers for Integrative Medicine, and began the awkward dance that has characterized such mergers.

Viewed one way, the migration of alternative medicine to the academic mainstream is a fine example of the might of popular will. After all, a 2004 survey revealed that 36 percent of adults in the United States have used alternative medicine at one time or another. If megavitamins and prayer are included, the proportion rises to 62 percent.

A darker view, though, is held by hard-core old-schoolers. Some of their objections are hyperventilation: They massage people! To make theme feel better! More seriously, they cast the encroachment of alternative medicine onto academic turf as a threat to American health because it’s diverting money for research and care from traditional approaches. For the last six years, alternative medicine has received about 1 percent of the $28 billion annual NIH budget, or $300 million a year. That’s the same amount that efforts to combat stroke, improve food safety, and further develop gene therapy each receive. A Brit, lamenting a similar resource shift in his country, has equated this to murder, writing that had money “spent on refurbishing the Royal Homeopathic hospital” been used instead for effective though expensive drugs to treat breast cancer, hundreds of lives a year would be saved.

Who should prevail in this struggle between naturalistic healers and ass-kickers with syringes full of chemotherapy? In a sense, neither side. Both have much to offer and plenty to be embarrassed about. To date, neither has established an all-encompassing operation so wondrous that it should demand monogamy from patients. So far, though, the problem with pairing the two disciplines at your corner medical center is that it mostly serves to diminish each: The West looks spent and flabby, a bully gone to seed, while the East seems like a kid with a new car and no clue how to drive.

The enforcers of the Western orthodoxy are the preening evidenced-based medicine crowd, those notorious killjoys who operate on the almost amusing premise that every square inch of medicine is built upon reason, the product of a rationally ordered stainless-steel world. If no evidence, they insist, then no truth. And if no truth, get thee out of my medical center. They briskly have swept away the entire alternative field, viewing chelation, St. John’s wort, and music therapy, for example, as interchangeably absurd.

But to consider the issue more closely, we have to define alternative medicine with greater care. A 2004 government report divided the field into four big pieces: 1) biologically based practices, including herbs, special diets, and megavitamins; 2) energy medicine, which embraces the concept of magnetic fields; 3) manipulative and body-based practices such as massage and yoga; and 4) mind-body medicine, including prayer and meditation.

Costly attempts to demonstrate efficacy, paid for with taxpayer dollars, have been launched in each of the four areas. To date, as recently detailed, the results have been awful. Take the example of echinacea, an herb used by 40 percent of all natural product gobblers, who take it to ameliorate the symptoms of the common cold. Echinacea was rushed into numerous clinical trials. The result: The research shows that it doesn’t work. Or even sort of work.

Rather than admit that they’re discouraged or embarrassed by this cold, hard evidence, the alterna-crowd has claimed (OK, whined) that academic-type studies by definition are stacked against them. They consider the bedrock of Western medicine—the randomized, placebo-controlled, double-blind clinical trial—too hard-edged and difficult to implement, just the sort of cruel-hearted gaming of people and disease that so characterizes most things Western. With echinacea and other botanicals, they make the additional complaint that the various trials used the wrong preparation of the magic herb. This problem is indeed critical and slows the pace of assessing various alternative remedies. Unlike standard pharmaceuticals, the production of which is fiercely regulated (another example of the sharp-elbowed West), production of echinacea and its cousins is more laid back. This helps the producer who can sell his wares with little interference, but it’s a bit of a nightmare when it comes to mounting a costly clinical trial. If one guy’s preparation does or doesn’t work, does that mean another echinacea will or won’t work, too? The looseness of the alternative approach is part of its appeal—but also hinders it from finding sure footing in the academic realm.

At the same time, to dismiss alternative medicine too quickly is to miss a central question: What is the role of health care? Is the enterprise aimed only at preventing and treating illness, or should it also try to make us feel better? Treating an illness Western-style can mean chopping off a leg, giving chemotherapy, hooking someone up to dialysis. All of this is done to score the touchdown of American medicine: extension of survival by a week, a month, a year, anything. No doctor wants a patient to suffer, but in the Western view the long-term goal of survival comes first. The focus of many Eastern approaches, on the other hand, is on feeling better now rather than lasting longer. And this is something altogether different.

The two goals—treatment and prevention on the one hand and making patients feel better on the other—really are often at odds. And in the future, they surely will diverge further as Western medicine becomes even more technologically sophisticated. A treatment with stem-cell or gene therapy isn’t going to be like drinking a glass of orange juice in the morning. The disruption and discomfort the therapies likely will inflict may make today’s medicine seem mild. The best response to the über-tech may be an equal and opposite move toward the more benign alternative realm.

Alternative medicine needs money and many years to find its way, and despite the early setbacks for echinacea and other treatments, it would be a mistake to call off the federal investment. Such an absolutist stance ignores the observations of thousands of people over thousands of years as well as the true pace of medical progress, which is at best herky-jerky and aimless. That’s not to say that alternative medicine is the equal of Western medicine, or will prove to be, many millions of research funds later. As Steve Jobs discovered, a special organic diet will not cure pancreatic cancer, whereas a six-hour surgery might. As brutal as Western medicine is, it remains a wonder of the modern world. So let’s hope that the two sides can find room for each other: The West needs the East’s soothing calm to round out its prickliness, while the East needs the West’s thuggish urge to push ahead and prove results. I think that’s called yin and yang.