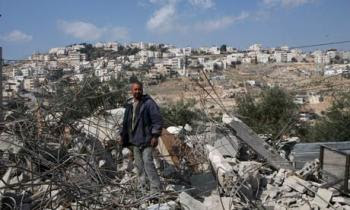 40-year-old Palestinian Mahmoud al-Abbasi stands amid the rubble of his home after it was demolished by the Jerusalem municipality in the East Jerusalem neighborhood of Silwan. Photograph: Gali Tibbon.
East Jerusalem Settlements Ratchet Up Tensions
By Helena Cobban / March 6, 2009

JERUSALEM – As the fires of human misery continue to smolder in Gaza, the situation in Israeli-occupied East Jerusalem is emerging as another potentially explosive issue in, and far beyond, the Middle East.

The long-term governance of the city is considered an issue of prime importance to both Palestinians and Israelis, as well as to their supporters around the world. Jerusalem-related tensions have been sparked several earlier rounds of violence between the two peoples, including when former (and future) Prime Minister Binyamin Netanyahu started work on the new East Jerusalem settlement of Har Homa in 1997.

In September 2000, it was a visit by opposition leader Ariel Sharon to Jerusalem’s Temple Mount – accompanied by 1,000 armed security people – that sparked the Second Intifada. Now, Israeli and Palestinian peace activists warn that the provocative actions of government-backed settler activists within Jerusalem could spark yet another serious escalation of tensions.

Some 220,000 Palestinians live in East Jerusalem, which until 1967 was the commercial and administrative hub of the whole West Bank region, of which it is an integral part. Since Israel occupied the city in 1967, successive Israeli governments have implanted vast (and very expensive) Israeli settlements into the city, whose boundaries they also unilaterally expanded.

Now, around 200,000 Israeli settlers live in those settlements, which surround the Palestinian-peopled core of the city. And for some years now settler activists, most of whose money comes from supporters in the United States, have also been building webs of settlement “outposts” deep inside the Palestinian core.

Two current areas of concern are Silwan, where the Jerusalem municipality recently issued demolition orders to the owners of 88 Palestinian homes, to establish a Jewish-history theme park there, and Sheikh Jarrah, where a massive armed police force last November evicted an older couple from their longtime home so that a group of settlers could move in.

That latter eviction occurred at 3:30 a.m. The man of the house, Abu Kamel al-Kurd, was already chronically sick. He and his wife, Um Kamel, moved into a tent on a vacant lot nearby and a few days later Abu Kamel had a heart attack and died. Um Kamel has continued living in the tent, even through the winter cold and storms.

Her campaign to stay in the tent until her home is restored to her has emerged as a potent rallying point of nonviolent resistance to Israel’s plans to continue colonising East Jerusalem. Israeli police have dismantled her tent six times, most recently on Feb. 23. But on each occasion her supporters – who include both Islamist and secular Palestinians – have re-erected it.

Most recently, many of the displaced Palestinians in Gaza – most of them descendants of refugees from 1948 – have once again been living in tents. And across Jerusalem in Silwan, local residents protesting their latest eviction orders, which will affect some 1,500 family members, have also erected a tent as a focal point for their protest.

In an interview in her tent Tuesday, Um Kamel told IPS, “Though we’re forced into tents, we Palestinians don’t seek tents or donations of things like clothes from the international community. All we seek is our rights! No one can overthrow the rights of other people in the way the Israelis do to us… We need all three groups, the Jews, the Christians, and the Muslims to live here together in Palestine, in peace and equality.”

The Palestinians of East Jerusalem have been in a precarious situation for many decades. In late June 1967 the city’s new Israeli occupiers expanded the municipal boundaries and declared that thenceforth Israel’s law would be applied directly to the city. That act of annexation was further cemented by Israel’s Knesset (parliament) in 1980.

Though the annexation was illegal under international law it has never been vigorously protested by the U.S. Indeed, U.S. government officials engage in complex verbal gymnastics to avoid openly acknowledging that – as all the members of the international community agree – East Jerusalem is indeed still occupied territory. This judgment means that all Israeli settlements there are quite illegal, and the city’s indigenous Palestinian residents should receive all the other protections specified in the Fourth Geneva Convention.

Instead of that happening, the Palestinians’ situation has become progressively worse. Almost immediately after the 1993 Oslo Accords were concluded, the Israeli authorities erected roadblocks and other measures designed to cut off the city’s Palestinians from their compatriots (and often, close family members) elsewhere in the West Bank.

Palestinians from elsewhere in the West Bank were meanwhile suddenly prevented from entering East Jerusalem, and many of the city’s once-thriving institutions – like schools, hospitals, and publishing houses – began to wither.

Until 1993, East Jerusalem had been the national hub of Palestinian politics. After Yasser Arafat returned to the West Bank to establish the new, Oslo-mandated Palestinian Authority (PA), he was forced to do so in nearby Ramallah, not Jerusalem. The Israelis prevented the PA from locating any of its institutions in East Jerusalem and Jerusalem’s people came under mounting pressures to leave their ancestral city.

After Oslo, successive Israeli governments also accelerated their building of new Jews-only settlements inside the city. Har Homa, started by Netanyahu in 1997, now has more than 6,000 residents and vast additional construction projects are now underway there and in nearby Gilo.

In 2001, after the start of the Second Intifada, newly installed Israeli premier Ariel Sharon started solidifying the separation of Jerusalem from the West Bank by building the 30-foot-high concrete walls, punctuated by forbidding cylindrical watch-towers, that now snake around – and sometimes, capriciously, right through – the built-up areas of the city.

The Jerusalem Palestinians always refused to take up Israeli citizenship, arguing that to do so would be an endorsement of Israel’s claim to the whole city. Without citizenship and the voting clout that would come with it, they have suffered grave discrimination at all levels, including in the provision of basic municipal services.

Their voice is excluded from city planning processes. The Israeli authorities prohibit all but a few Jerusalem Palestinians from building on even their own wholly-owned real estate. Eviction orders are routinely issued to Palestinians regarding either homes built long before 1967 or homes built since then whose owners have not gone through the burdensome and expensive process of amassing all the required permits. (Most Israeli Jewish developers meantime receive the government’s strong financial and administrative support for their projects.)

In recent weeks, the settler activists of Silwan and Sheikh Jarrah have received strong support from a rightist-dominated municipality to escalate their activities. The municipality has also stepped up its demolitions of Palestinian homes deemed “illegal” in many parts of the city, to the level of two or three per week.

With Netanyahu now poised to return as prime minister, the scene seems set for further confrontations in this city so dear to millions of believers around the world.

[Helena Cobban is a veteran Middle East analyst and author. She blogs at www.JustWorldNews.org.]