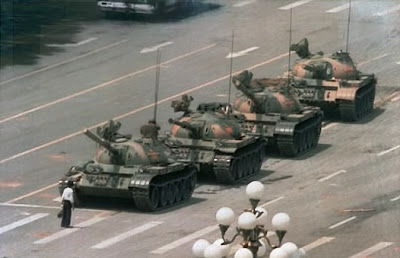 Tiananmen Square, 1989. On the 19th anniversary of China’s bloody crackdown on pro-democracy demonstrations, civil rights activists are calling for the release of more than 100 prisoners from the 1989 protests ahead of this summer’s Olympic Games. Photo by Jeff Widener / AP.
China Urged to Release Tiananmen Square Prisoners
By Jonathan Watts / June 4, 2008

Beijing – Civil rights activists called on the Chinese government today to release more than 100 prisoners from the 1989 Tiananmen Square protests as a sign of its commitment to improve human rights ahead of this summer’s Olympic Games.

On the 19th anniversary of the bloody crackdown by People’s Liberation Army troops, participants and supporters said the recent openness of the Sichuan earthquake relief operation could pave the way for a wider national reconciliation if the events of 1989 are reviewed and those punished are pardoned.

Human Rights Watch said 130 people are still in prison as a result of their roles in the pro-democracy demonstrations, which started in Beijing and spread to several other cities. By freeing them, the group said China could show “the global Olympic audience it is serious about human rights”.

Hundreds, possibly thousands, of pro-democracy demonstrators and their supporters were killed by army tanks and troops in and around Tiananmen Square on June 3 and 4, 1989.

Civic groups and foreign governments – including the US and UK – have called for a full investigation and a pardon for those imprisoned in the crackdown that followed.

The government in Beijing insists the actions were needed to restore order, but it has blocked public debate on the issue.

One of the most prominent activists from 1989, Han Dongfang, said in a statement that the relative transparency shown by the Chinese authorities in their handling of the Sichuan earthquake should be repeated for the political wrongdoings of the past.

“The shift in leadership style shown by the government in response to the earthquake disaster suggests that the time is now right for such a step,” said Han in an essay titled “A Time for Unity, a Time for Reconciliation” that praised the role of the army in the relief effort.

In Tiananmen Square today, the security presence was beefed up, as is usual every year on June 4. Police checked the bags of many visitors entering the area for liquids, banners and petitions.

But most tourists seemed oblivious to the significance of the date, which is a taboo subject in the domestic media.

“It is my first visit to Beijing. The square is far more impressive than I imagined,” said a middle-aged man who had just arrived from Liaoning province with his wife. “I never heard of any trouble here in 1989. We live in a country village. We don’t know about that kind of thing.”

Far from remembering past misdeeds, the government’s focus is on looking forward to future glories. Tiananmen Square is in the midst of a city-wide facelift ahead of the Olympics. Dozens of migrant women in blue tunics were scrubbing the tens of thousands of paving stones with detergent to remove chewing gum and other blemishes.

Many of the approaching streets have been decorated with potted flowers, and construction sites are screened off with giant banners reading “Join hands with the Olympics, make a date with Beijing in 2008”. The countdown clock noted there are only 64 days to go until the start of the Games.