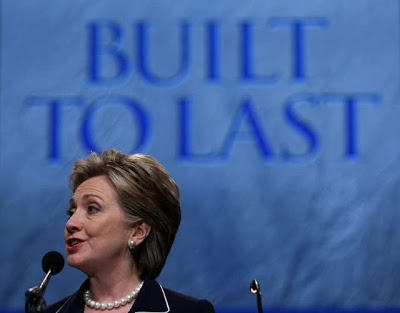 Senator Clinton’s speech last night was a justifiably proud recitation of her accomplishments over the course of this campaign, but it did not end right. She didn’t do what she should have done. As hard and as painful as it might have been, she should have conceded, congratulated, endorsed and committed to Barack Obama. Therefore the next 48 hours are now as important to the future reputation of Hillary Clinton as the last year and a half have been.

I am disappointed. As a long time Hillary Clinton supporter and more importantly, an admirer, I am sad that this historic effort has ended with such a narrow loss for her. There will be the appropriate “if onlys” for a long time to come. If only the staff shakeup happened earlier; if only the planning in caucus states had more focus; if only Hillary had let loose with the authentic human and connecting voice she found in the last three months of the campaign. If only. If only. I have written many times on this site about the talents of Hillary Clinton and why I thought she’d make a great President

After last night’s final primary, she was only about pledged 100 delegates behind him. Ironic that after not wanting to make the decision for so long, it was in fact, the superdelegates who made the decision. But I guess they did so for another reason. It just isn’t her time. It is his time. It’s a new day that offers a freshness to our party that many have longed for. We felt the rush of new voices and a new energy in the Congressional sweep of 2006 and the sweep continues. It has been an organic shift. And a healthy one.

The life’s work of Bill and Hillary Clinton in partnering with so many African Americans uniting our purpose and promoting our mutual issues is as responsible for Barack Obama’s success as our first African American nominee as anyone. And yet, that joy is being denied for them by themselves. It is so sad.

So, I am also so very disappointed at how she has handled this last week. I know she is exhausted and she had pledged to finish the primaries and let every state vote before any final action. But by the time she got on that podium last night, she knew it was over and that she had lost. I am sure I was not alone in privately urging the campaign over the last two weeks to use the moment to take her due, pass the torch and cement her grace. She had an opportunity to soar and unite. She had a chance to surprise her party and the nation after the day-long denials about expecting any concession and send Obama off on the campaign trail of the general election with the best possible platform. I wrote before how she had a chance for her “Al Gore moment.” And if she had done so, the whole country ALL would be talking today about how great she is and give her her due.

Instead she left her supporters empty, Obama’s angry, and party leaders trashing her. She said she was stepping back to think about her options. She is waiting to figure out how she would “use” her 18 million voters.

But not my vote. I will enthusiastically support Barack Obama’s campaign. Because I am not a bargaining chip. I am a Democrat.