Iraq Report: The US Hegemonic View of the SOFA 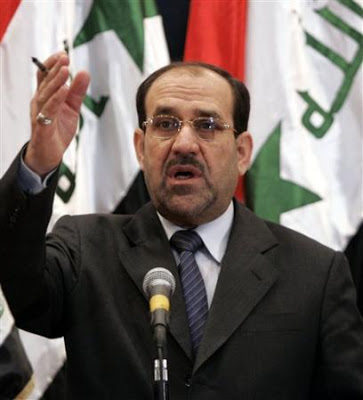 WASHINGTON — U.S. officials privately admit being concerned that Iraqi Prime Minister Nuri al- Maliki has become “overconfident” about his government’s ability to manage without U.S. combat troops, according to an Iraq analyst who just returned from a trip to Iraq arranged by U.S. commander General David Petraeus.

Colin Kahl, a fellow at the Centre for a New American Security (CNAS) — which has supported a long-term U.S. military presence in Iraq — told the press this week that there was “a certain degree of grudging respect for al- Maliki” among officials with whom we met, “but more often concern about his emerging overconfidence which is making it difficult to interact with him.”

That assessment contrasts with statements of George W. Bush administration officials implying that al-Maliki’s public demands for a timetable for U.S. military withdrawal are merely negotiating ploys or political grandstanding.

U.S. officials admitted that al-Maliki’s overconfidence has influenced the status of forces negotiations, according to Kahl. None of the U.S. officials in Baghdad would “lead off with badmouthing the prime minister,” Kahl said in an interview with IPS, but upon probing further, “you get a sense they are concerned that the al-Maliki regime has an inflated sense of his power.”

The Bush administration hoped negotiations with al-Maliki on a status of forces agreement would legitimise a long-term U.S. military presence in Iraq and control over a number of military bases, but the Iraqi leader refused to go along with an agreement that lacked a timetable for withdrawal of all U.S. troops.

Al-Maliki’s new sense of confidence has been accompanied by a new political identity as a nationalist foe of the occupation, according to Kahl. “He is successfully fashioning himself as an Iraqi hero who kicked the Americans out. That makes him difficult to negotiate with.”

One of the consequences of al-Maliki’s perception of the new power relations in Iraq is that he is even less inclined than before to make accommodations with former Sunni insurgents now on the U.S. payroll in the militias called ‘Sons of Iraq’.

Kahl said in the briefing that, of the 103,000 Sunnis belonging to those militias, the Iraqi government had promised to take into the security forces only about 16,000. But in fact, it has approved only 600 applicants thus far, according to Kahl, and most of those have turned out to be Shi’a rather than Sunni militiamen.

“There’s even some evidence that [al-Maliki] wants to start a fight with the Sons of Iraq,” said Kahl. “Al-Maliki doesn’t believe he has to accommodate these people. He will only do it if we twist his arm to the breaking point.”

Kahl said al-Maliki has made a series of moves that have consolidated his personal power position within the state apparatus as well as in relation to various armed groups in the country. He has put intelligence agencies directly under his control and has set up major military operation centres around the country which report directly to the prime minister’s office.

Even more important, however, Al-Maliki’s power position has also been bolstered by the decisions by nationalist Shiite leader Moqtada al-Sadr not to launch a concerted military resistance to U.S. and Iraqi government campaigns to weaken his Mahdi Army in 2007 and then to give up his political-military power positions in Basra, Sadr City and Amarah in 2008 without having been militarily defeated.

High officials in the al-Maliki regime asserted repeatedly last fall that it was Iran’s intervention with al-Sadr that brought about the unilateral ceasefire of Aug. 27, 2007. Sadr’s decisions to give up military control of Basra and Sadr City before his forces were defeated were taken in the context of Iranian mediation between al-Sadr and the al-Maliki regime.

Iran’s strategic relationship with al-Sadr accomplished what the U.S. military never believed would be possible even in its most optimistic scenario — the neutralisation of the most potent political-military threat to the regime’s stability. The ability of Iran to deliver that benefit to al-Maliki — as part of a broader shift to an anti-occupation regime policy — almost certainly strengthened the case that Iran made to al-Maliki for a demand for a timetable for U.S. troop withdrawal in the status of forces negotiations.

Kahl is sympathetic to the official U.S. concerns about al-Maliki. Both Kahl and CNAS have called for negotiation of a U.S. military presence in Iraq going well beyond the 2010 deadline for complete U.S. withdrawal that al-Maliki has put forward publicly.

In an unpublished paper for CNAS last April, Kahl advocated that the U.S. should keep 60,000 to 80,000 troops in Iraq into late 2010 in what he called a “sustainable over-watch posture”.

Despite the change in the power situation, Kahl and CNAS still takes the position that Iraq needs long-term U.S. support so badly that the Bush administration should use its leverage to get the al-Maliki regime to make the political accommodations necessary to achieve longer-term stability in the country. For example, the Iraq government’s need for U.S. help in recovering illegally exported funds and properties, which were included in the statement of principles governing the negotiations last November at Iraqi insistence.

Then there is the threat of immediate troop withdrawal if al-Maliki does not toe the line. Kahl said he was told in Iraq that, in one of the regular videoconferences Bush holds with al-Maliki, he said, “If the negotiations crash and burn, I will be forced to pull out all U.S. troops by Jan. 1.”

That Bush threat “got al-Maliki’s attention,” Kahl believes. He advocates the use of such threats to force al-Maliki to accommodate the interests of the Sunnis as well as those of the Sadrists, in order to bring them fully into the political system. Otherwise, Kahl argues, the security gains of 2007 and 2008 will ultimately be reversed.

Al-Maliki is no longer dependent on Washington as he was a year or two ago. That major shift in power relations — now reluctantly acknowledged by the Bush administration — has brought into sharper relief the contradictions between the interests of the Iraqi government and those of the administration.

The al-Maliki regime is a Shiite-dominated government that views its Sunni Arab neighbours — who have generally opposed Shiite rule in Iraq — with intense distrust and looks to Iran for support against them. The Bush administration, on the other hand, has forged closer relations with Sunni regimes against Iran. The short-term Shiite dependence on the U.S. occupation to establish Shiite control of the state apparatus is giving way to a more fundamental distrust toward U.S. power in Iraq and the region.

1 Response to Iraq Report: The US Hegemonic View of the SOFA