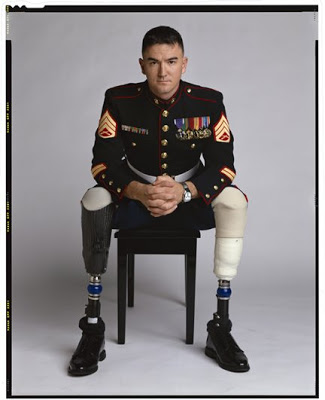 Portrait of Marine Staff Stg. John Jones by Timothy Greenfield-Sanders.
‘Where is George when thousands severely wounded in his misguided Iraq war need him to act?’
By Jim Hightower / August 6, 2008

When Bear Stearns, Freddie Mac, and Fannie Mae got in a financial crunch, George W was Georgie-on-the-spot, rushing out with a bailout package of more than $130 billion.

But, where is George when America’s wounded veterans – including thousands severely wounded in his misguided Iraq war –need him to act? Last year, the public was disgusted to learn of the scandalous mistreatment these vets were getting at the Army’s Walter Reed hospital and other VA medical centers.

Caught unaware by the furor, Bush hurriedly promised to do something, and in February he claimed success. His army surgeon general told Congress that “we are entirely staffed at the point we need to be,” adding with bravado that “a key element of our warrior ethos is that we never leave a soldier behind on the battlefield – or lost in a bureaucracy.”

But wait – why aren’t veterans applauding? Because they know that claiming progress is not the same as making it. In June, congressional staffers investigated a wounded vet center in Texas that was set up for 649 patients, but is now jammed with more than 1,300. Another 350 vets are struck on a waiting list and some will languish there up to a year, even though many are at high risk of suicide. Instead of being “entirely staffed,” the center has only half the number of nurse case managers it needs.

Why is there such an outrageous gap between Bush’s promise and performance? The Bushites claim that, gosh, they simply didn’t anticipate so many wounded soldiers coming out of Iraq. Excuse me! The war has been going on for more than five years, and the awful number of casualties has been reported daily. How could they not know?

I’ll bet that if our vets had names like Freddie, Fannie, and Bear – Bush would have covered all of their needs, pronto.