The volume is a labor of love that honors Houston’s historic
underground newspaper. 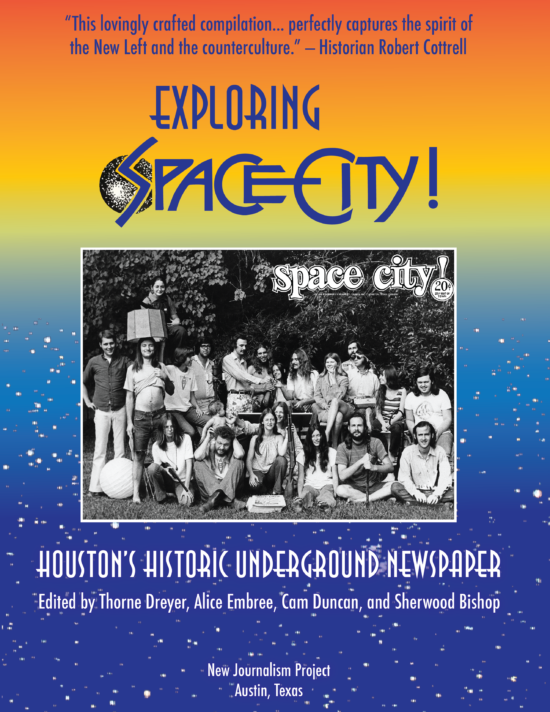 SAN FRANCISCO — Comedian Robin Williams would say, famously, “If you remember the 1960s you really weren’t there” and get barrels of laughter. Of course, Williams might not have originated the quip. Other candidates include Paul Kantner and Grace Slick of the Jefferson Airplane and Starship, Paul Krassner of Realist fame, Pete Townshend of the Who, and Timothy Leary who urged followers to “Turn on, Tune in, Drop Out.”

Once upon a time it might have been necessary to keep all the facts about the 1960s in one’s own head. That’s no longer true. You can Google just about everything associated with what historian John McMillan has called “The Long Sixties,” the era that began in 1955 with the birth of the modern civil rights movement, and that lasted until 1975, when the War in Vietnam, once the longest in U.S. history, came to an end with a whimper, not a bang. Then, too, there are now shelves and shelves of reference books about that era. The Long Sixties has long been a cottage industry.

Everything and more that you could possibly want to know about Houston, Texas, including its politics, culture, and economics, is contained in a dazzling and authoritative new book profusely illustrated and titled Exploring Space City! Edited by Thorne Dreyer, Alice Embree, Cam Duncan, and Sherwood Bishop—designed by Carlos Lowry and with dozens of staff members—the volume is a labor of love that honors “Houston’s Historic Underground Newspaper,” to borrow the subtitle. 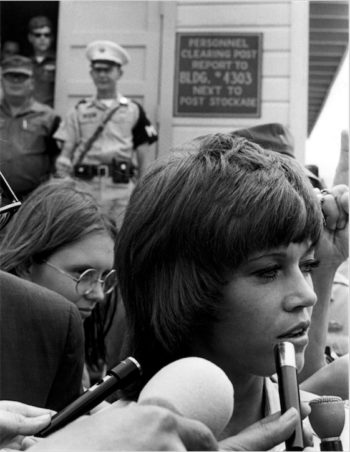 Jane Fonda at Ft. Hood, on page 73 of Exploring Space City! She was interviewed at the Oleo Strut GI Coffee House. Photo by Thorne Dreyer.

It’s 361 pages, it’s published by the New Journalism Project in Austin, and it offers some of the original ads that graced the paper and enabled it to survive as long as it did. Exploring Space City! is a companion work to Celebrating The Rag: Austin’s Iconic Underground Newspaper which was published in 2016.

Pages 336 and 337 of Exploring Space City! offer the names of the hundreds of contributors to the paper, its cartoonists, photographers, writers and editors, from Arnold to Zuni, Ellington to Fitzgerald, Brand to Bing and beyond. All the covers are reproduced, along with capsule biographies, some of famous folks like Gilbert Shelton, Molly Ivins, and Jeff Shero, aka Jeff Nightbyrd, others of largely unknown individuals such as Gary Chason who wrote about film and the arts and who died not long before this book went to press.

Exploring Space City! is divided into nine hefty sections. They are: Beginnings, The Klan, Insurgents, Culture, Community Building, Power Structure, Special Reporting, Electoral Politics, and Reflections. (Space City! and the Houston Left were under continual assault from a revitalized Knights of the Ku Klux Klan.)

‘We have recovered and recorded significant history that otherwise might have been lost.’

The major sections are further subdivided. Insurgents covers all the bases and offers these topics: Women’s Liberation, Anti-war Resistance, GI Resistance, Gay Liberation, High School, MAYO y El Movimiento, and Black Liberation. Each section includes an introduction from the present day that looks back at the past and that provides useful perspectives and frameworks. 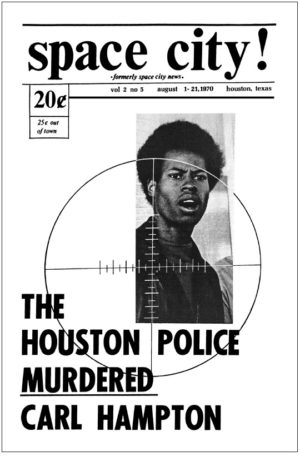 In “I Read the News Today, Oh Boy,” Dreyer writes, “With this book and in the process of preparing it, we have recovered and recorded significant history that otherwise might have been lost.” Indeed, it has done just that.

Chroniclers of the movement and the counterculture have often focused on the East Coast and the West Coast and have neglected Texas and what’s dismissively called “Fly-Over Country.” Dreyer points out that while The Rag was “set in a campus environment,” Space City! “thrived in an urban setting with a bohemian community based in the Montrose neighborhood and in pockets around the lively boomtown.”

He also explains that some of the language that was used in the 106 issues of the paper, “many of us would not use today.”

In ”The Counterculture and the Underground Press, ”John Moretta, the author of The Hippies: A 1960s History, writes that both The Rag and Space City! advocated for a “hip/politico alliance.” He adds that the underground press, which once emphasized peace and love, became more defiant, rebellious, and angry, especially in the wake of the murders of Black Panthers and members of other Black groups. In 1970, Houston cops shot and killed Carl Hampton, the leader of People’s Party II, a vital African-American organization.

Bishop’s personal history is fascinating and
emblematic of that era.

In “Space City! and Houston’s Alternative Community,” Sherwood Bishop offers useful facts, namely that 25 percent of Houston’s population was African-American and that the city experienced white flight. Bishop’s personal history is fascinating and emblematic of that era. 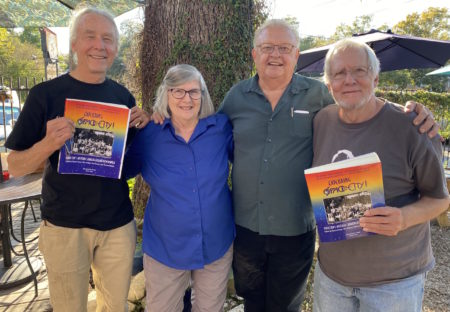 “In the summer of 1969, I was working at the Shell Oil refinery in Deer Park,” he explains. “I was an active union steward in the Oil Chemical & Atomic Workers Local 4-367. Unfortunately, I’d become disillusioned with the union, due to the racism and the reactionary attitudes of most of the members.” Fortunately, his disillusionment led him to visit the Space City! office where there were “no computers, smart phones, or email.” That’s a useful reminder of the technology of that time and place.

In “Space City! and Women’s Liberation,” Alice Embree looks back at the original collective and remembers that “it had a gender parity that was uncommon at the time,” and that coverage of women’s issues, in the days before Roe v. Wade, was “continuous and diverse,” and “reflected an intersectional approach.” Space City! published the poetry of Diane di Prima and Margaret Randall along with reviews of feminist books such as The Dialectic of Sex and The Female Eunuch.

There are too many excellent articles by too many excellent writers in this book to mention them all. I have my favorites. Other readers will have their own favorites. If you were in and around Houston at the tail end of the 1960s and the start of the 1970s—Space City News (later Space City!), which lasted three-and-one-half years, from June 5, 1969 to August 3, 1972—will awaken memories and perhaps rekindle hopes and dreams.

If you were not in and around Houston, home to NASA, Exploring Space City! provides an opportunity to get to know what made the place tick, discover the lives of the people who played music, protested in the streets, aimed to liberate the unliberated, confronted the cops who seemed to be everywhere poking their noses into everyone’s business, firing real bullets, clobbering the innocent and the guilty, arresting them and locking them up.

Sometimes the more things change the more they stay the same: police brutality is one of those things. 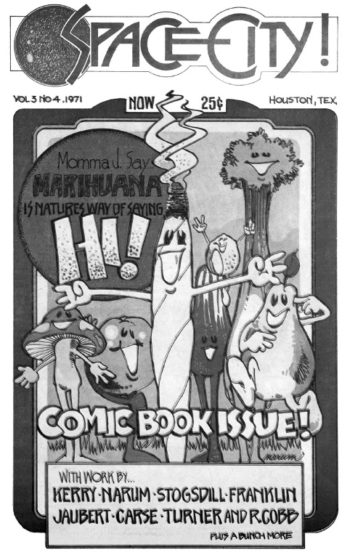 A word about myself. I was not a member of the Liberation News Service (LNS) collective—Thorne Dreyer was—but I wrote for LNS, watched Cronkite on the evening news in the basement with the likes of Teddy Franklin, Barbara Rothkrug, Katya Taylor, and Allen Young, who recruited me to write for the packets that went out a couple of times a week to underground papers and other alternative media around the country.

In 1974, I published an autobiography, Out of the Whale: Growing up in the American Left. Recently, I’ve been recruited to write reviews of books about the underground press such as John McMillan’s Smoking Typewriters, and the books edited by Ken Wachsberger. I have not yet read Alice Embree’s memoir, Voice Lessons, published in 2021 by the University of Texas Press. I want to.

Over the past decade, I’ve been a guest on Rag Radio nine times and have enjoyed the company of Thorne and Alice. Knowing them made my reading of Exploring Space City! a more personal experience than it otherwise would have been. But I did not know the majority of the contributors to this volume until I encountered them in these pages.

So I have gotten to know the work of Dennis and Judy Fitzgerald, Bill Casper, Trudy Minkoff (I love her cartoons), Cam Duncan (his photos are eye-opening), John M. Lomax (his pieces on the blues and on rock are memorable), and Jim Franklin’s art (his flying armadillos are surreal.)

Dreyer asks a question that’s as relevant now as
when he asked it in 1972.

There is humor here, some of it subtle and some not so subtle. “Even gravity was not enough to hold us down in Houston, our NASA having put men on the moon,” one contributor wrote. Other stories reflect the lingo of the era. “The Red Coyote Tribe of Houston is getting its shit together,” Dreyer wrote. Elsewhere he asks a question that’s as relevant now as when he asked it in 1972: “Is the Democratic Party becoming a party of the people? Or are we witnessed the crowning achievement of co-optation in our century? Or maybe a little of both?” 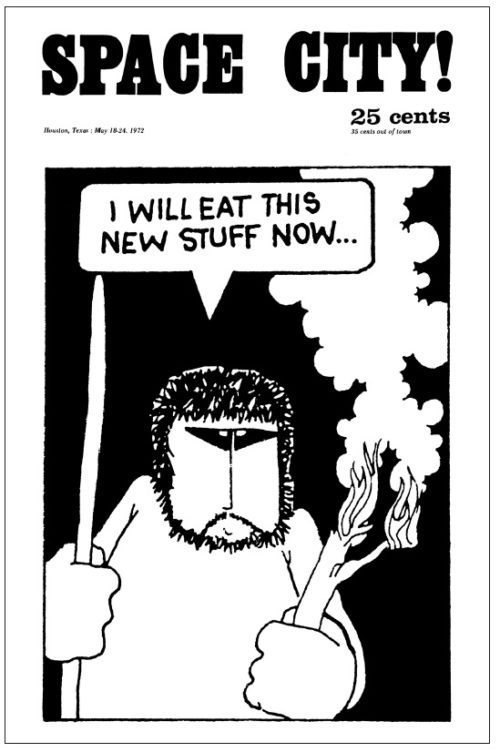 Exploring Space City! shows that Houston was a world unto itself with its own unique flavors and rhythms, and at the same time a microcosm of America in the 1970s, a nation enmeshed in all the big isms of the days: racism, sexism, and classism.

Like all major U.S. cities, Houston had a power elite that was exposed in the pages of its underground newspaper. Like all major cities, it had pockets of resistance to the power elite. Did the paper change Houston? It did while it lasted. Indeed, as one reporter noted, it was “a portal…for community building.” Did the paper make lasting changes? Ask Jeffrey Shapiro, who is writing a book about the VISTA volunteer program in Houston, or ask Trudy Stern (Minkoff), who is now a Shambala Buddhist and teaches Miksang, contemplative photography.

The biographies at the back of the book show how many of the contributors are no longer alive.

The biographies at the back of the book show how many of the contributors are no longer alive—Victoria Smith (later Victoria Marie Holden), Walter Birdwell, Dennis Fitzgerald, Susan Duncan, Karolyn Kendrick, Adolfo Mexiac, Tary Owens, Gregorio Salazar, Don Snell, and Gary Chason. So Exploring Space City! is also a monument to them and their work which shaped a time and a place worth remembering.

If you read the underground newspapers from the Long Sixties, such as The Rat from New York, The Seed from Chicago, The Barb from Berkeley, Dock of the Bay from San Francisco, The Great Speckled Bird from Atlanta, and The Rag from Austin you’ll likely want to dive head first into Exploring Space City!

If you’re the son or the daughter, or even a distant relative of a “paper revolutionary,” a street fighting man or woman, or the descendant of someone shot and killed by cops, this book will show you how it really was back in the day when reporters, cartoonists, and photographers were near the heart of the action and helped to make history.

“Who wants yesterday’s papers?” The Stones ask on their hit single. They reply, “Nobody in the world.” Not true! It wasn’t true in 1967 when Mick Jagger wrote the lyrics to the song, and when underground newspapers were booming. It isn’t true now, when yesterday’s underground papers offer news of America at war in distant Vietnam and at war at home with itself and its own people.

The official release of Exploring Space City! takes place with a Zoom launch on Tuesday, Dec. 7, at 7 p.m. There will also be a book release event Saturday, Dec. 11, 3-6 p.m. at Johnny McElroy’s Irish Pub and Patio, 1223 Waugh Dr. in Houston. Books will be available there and can also be purchased at Lulu.com/shop.

Contact exploringspacecity@gmail.com to participate in the Zoom launch or to learn about other outlets for the book.