The demagogue sounds off. 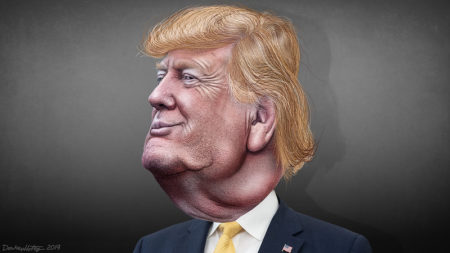 SONOMA COUNTY, Calif. — Donald Trump’s Fourth of July oration has been heralded in some quarters as a genuine expression of the highest ideals of American democracy. Writing in Tablet, Liel Leibovitz, an Israeli born journalist who came to the U.S. in 1989, says that it was “every bit the statement I needed to hear, a clear and unapologetic reminder of why America is worth loving unconditionally, admiring unequivocally and fighting for unremitting.” There are too many “uns” for my liking, and too much emphasis on fighting which is what got us in the Civil War, the unrest of the 1960s and 1970s and the house dividedness of the present day.

Leibowitz goes on to quote at length Trump’s comment that, “We are the country of Andrew Jackson, Ulysses S. Grant, and Frederick Douglass. We are the land of Wild Bill Hickock and Buffalo Bill Cody. We are the nation that gave rise to the Wright Brothers, the Tuskegee Airmen, Harriet Tubman, Clara Barton, Jesse Owens, George Patton — General George Patton — the great Louie Armstrong, Alan Shepard, Elvis Presley, and Mohammad Ali.” Why Louie and not Louis? Was Trump ever that intimate with “Satchmo”?

Trump’s speech is as notable for whom he omits as much as for whom he includes. He mentions no American Indians, no Sitting Bull or Geronimo, no first generation immigrants, either, and no Mexican-Americans. Trump goes on to say, and Leibowitz goes on to quote the sentence in which mention is made of Walt Whitman, Mark Twain, Irving Berlin, Ella Fitzgerald and Frank Sinatra, all of whom are dead. Perish the thought that he might include a living person.

The president also heralded ‘the toughness of
the Ford F-150.’

The president also heralded “the toughness of the Ford F-150,” as though it was a military weapon, and “the awesome might of the American aircraft carriers.”

In fact, from beginning to end, Trump emphasizes American military might. Near the beginning of his remarks he says, “I want to thank the U.S. Army Golden Knights for that truly awe-inspiring display. Tremendous talent. The Golden Knights, and every member of the Armed Forces here this evening, we just want to say that you have earned the eternal gratitude of our entire nation.”

Near the end of his remarks, he adds, “I want to thank our men and women — they are so good — of the National Park Service, Air Traffic Control, and the United States Military.” Trump says that he wants “unity” and that, “We are one family and one nation.”

But nearly everything about his remarks sounds as though intended to divide and polarize as when he demonizes and scapegoats “the radical left, the Marxists, the anarchists, the agitators, the looters, and people who, in many instances, have absolutely no clue what they are doing.” Trump does no service to the nation and to all its citizens by lumping the radical left with the looters and the agitators, and by ignoring the role of genuine idealists and lovers of democracy who have played a major role in the protests against police brutality and misconduct.

When he addresses those who “lie,” “slander,” “demean and divide” he seems to be projecting what he himself does and says onto those he views as the enemy.

Like all good demagogues, he goes
for the Big Lie.

Like all good demagogues, he goes for the Big Lie and tries to conceal his own deceitfulness. Anyone who falls for Trump’s narrative which celebrates American exceptionalism, American military might, the American flag, American heroes, the American Dream, the American way of life, and Christopher Columbus whom he credits as the explorer who “discovered America,” is possibly in denial big time, and also out of touch with reality.

Indeed anyone who pays attention to what’s happening in his or her own neighborhood, down at the local hospital and at the homes for old people, surely knows that when Trump talks about COVID-19 and declares “we’ve made a lot of progress; our strategy is moving along well,” he ignores the big ways that he and his administration have failed to protect and save the lives of tens of thousands of American citizens.

I started to count the number of times that Trump uses the word “great” in his remarks and soon gave up. It’s many times. He seems to think and to believe that if he says the word “great,” Americans will believe everything he says and that he will magically make it so.

His July Fourth speech shows a president on the ropes, reaching out to try to save himself and his reputation and to con the citizens of the Republic who now increasingly see that the emperor wears no clothes.

In his essay, Leibovits writes that “this is America and one big reason to love it is that here we neither crown our elected officials the harbingers of all hope and change nor do we detest them with the fiery animus that thrusts so many societies into civil war.”

Would that it were so, sir.

Trump mentions Frederick Douglass but he does not acknowledge Douglass’ key speech of July 5, 1852, which is as timely now as it was then, in which he addressed the nation as a whole and exclaimed, “I say it with a sad sense of the disparity between us. I am not included within the pale of glorious anniversary! Your high independence only reveals the immeasurable distance between us. The blessings in which you, this day, rejoice, are not enjoyed in common. The rich inheritance of justice, liberty, prosperity and independence, bequeathed by your fathers, is shared by you, not by me. The sunlight that brought light and healing to you, has brought stripes and death to me. This Fourth July is yours, not mine. You may rejoice, I must mourn.”