Kim Phuc : Then and Now 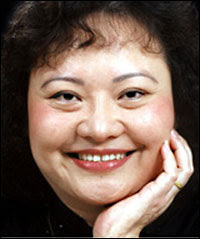 Kim Phuc now lives in Toronto with her husband and two children. Her organization, Kim Foundation International, aids children who are war victims. Photo courtesy of the Canadian Broadcasting Corp. 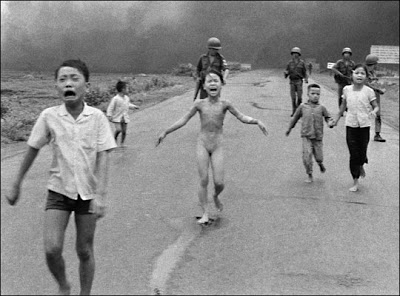 In one of the most famous images of the Vietnam War, South Vietnamese forces follow terrified children, including 9-year-old Kim Phuc (center) as they run down Road No. 1 near Trang Bang after an aerial napalm attack on suspected Viet Cong hiding places, June 8, 1972. President Richard Nixon once doubted the authenticity of the photo, which earned a Pulitzer Prize for photographer Nick Ut.

On June 8, 1972, I ran out from Cao Dai temple in my village, Trang Bang, South Vietnam; I saw an airplane getting lower and then four bombs falling down. I saw fire everywhere around me. Then I saw the fire over my body, especially on my left arm. My clothes had been burned off by fire.

I was 9 years old but I still remember my thoughts at that moment: I would be ugly and people would treat me in a different way. My picture was taken in that moment on Road No. 1 from Saigon to Phnom Penh. After a soldier gave me some drink and poured water over my body, I lost my consciousness.

Several days after, I realized that I was in the hospital, where I spent 14 months and had 17 operations.

It was a very difficult time for me when I went home from the hospital. Our house was destroyed; we lost everything and we just survived day by day.

Although I suffered from pain, itching and headaches all the time, the long hospital stay made me dream to become a doctor. But my studies were cut short by the local government. They wanted me as a symbol of the state. I could not go to school anymore.

The anger inside me was like a hatred as high as a mountain. I hated my life. I hated all people who were normal because I was not normal. I really wanted to die many times.

I spent my daytime in the library to read a lot of religious books to find a purpose for my life. One of the books that I read was the Holy Bible.

In Christmas 1982, I accepted Jesus Christ as my personal savior. It was an amazing turning point in my life. God helped me to learn to forgive — the most difficult of all lessons. It didn’t happen in a day and it wasn’t easy. But I finally got it.

Forgiveness made me free from hatred. I still have many scars on my body and severe pain most days but my heart is cleansed.

Napalm is very powerful but faith, forgiveness and love are much more powerful. We would not have war at all if everyone could learn how to live with true love, hope and forgiveness.

If that little girl in the picture can do it, ask yourself: Can you?

[This essay was produced by Anne Penman for the Canadian Broadcasting Corp. NPR’s This I Believe is independently produced by Jay Allison and Dan Gediman with John Gregory and Viki Merrick.]

This entry was posted in RagBlog and tagged Forgiveness, History, Napalm, Photography, Vietnam. Bookmark the permalink.