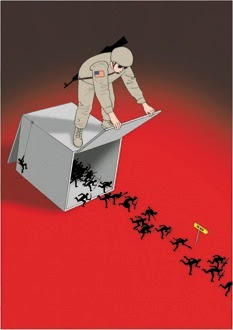 Drawing courtesy of The New Yorker
The Bush Administration steps up
its secret moves against Iran.
by Seymour M. Hersh

This blockbuster article by Seymour Hersh about U.S. covert operations in Iran appears in the July 7 and 14 issue of The New Yorker. Hirsch, who won the Pulitzer Prize for breaking the story of the My Lai Massacre in 1970 is the most important American independent journalist since I.F. Stone.

On June 29 we published a Reuters report on this article.

Late last year, Congress agreed to a request from President Bush to fund a major escalation of covert operations against Iran, according to current and former military, intelligence, and congressional sources. These operations, for which the President sought up to four hundred million dollars, were described in a Presidential Finding signed by Bush, and are designed to destabilize the country’s religious leadership. The covert activities involve support of the minority Ahwazi Arab and Baluchi groups and other dissident organizations. They also include gathering intelligence about Iran’s suspected nuclear-weapons program.

Clandestine operations against Iran are not new. United States Special Operations Forces have been conducting cross-border operations from southern Iraq, with Presidential authorization, since last year. These have included seizing members of Al Quds, the commando arm of the Iranian Revolutionary Guard, and taking them to Iraq for interrogation, and the pursuit of “high-value targets” in the President’s war on terror, who may be captured or killed. But the scale and the scope of the operations in Iran, which involve the Central Intelligence Agency and the Joint Special Operations Command (JSOC), have now been significantly expanded, according to the current and former officials. Many of these activities are not specified in the new Finding, and some congressional leaders have had serious questions about their nature.

Under federal law, a Presidential Finding, which is highly classified, must be issued when a covert intelligence operation gets under way and, at a minimum, must be made known to Democratic and Republican leaders in the House and the Senate and to the ranking members of their respective intelligence committees—the so-called Gang of Eight. Money for the operation can then be reprogrammed from previous appropriations, as needed, by the relevant congressional committees, which also can be briefed.

“The Finding was focussed on undermining Iran’s nuclear ambitions and trying to undermine the government through regime change,” a person familiar with its contents said, and involved “working with opposition groups and passing money.” The Finding provided for a whole new range of activities in southern Iran and in the areas, in the east, where Baluchi political opposition is strong, he said.

Although some legislators were troubled by aspects of the Finding, and “there was a significant amount of high-level discussion” about it, according to the source familiar with it, the funding for the escalation was approved. In other words, some members of the Democratic leadership—Congress has been under Democratic control since the 2006 elections—were willing, in secret, to go along with the Administration in expanding covert activities directed at Iran, while the Party’s presumptive candidate for President, Barack Obama, has said that he favors direct talks and diplomacy.

The request for funding came in the same period in which the Administration was coming to terms with a National Intelligence Estimate, released in December, that concluded that Iran had halted its work on nuclear weapons in 2003. The Administration downplayed the significance of the N.I.E., and, while saying that it was committed to diplomacy, continued to emphasize that urgent action was essential to counter the Iranian nuclear threat. President Bush questioned the N.I.E.’s conclusions, and senior national-security officials, including Secretary of Defense Robert Gates and Secretary of State Condoleezza Rice, made similar statements. (So did Senator John McCain, the presumptive Republican Presidential nominee.) Meanwhile, the Administration also revived charges that the Iranian leadership has been involved in the killing of American soldiers in Iraq: both directly, by dispatching commando units into Iraq, and indirectly, by supplying materials used for roadside bombs and other lethal goods. (There have been questions about the accuracy of the claims; the Times, among others, has reported that “significant uncertainties remain about the extent of that involvement.”)

Military and civilian leaders in the Pentagon share the White House’s concern about Iran’s nuclear ambitions, but there is disagreement about whether a military strike is the right solution. Some Pentagon officials believe, as they have let Congress and the media know, that bombing Iran is not a viable response to the nuclear-proliferation issue, and that more diplomacy is necessary.

A Democratic senator told me that, late last year, in an off-the-record lunch meeting, Secretary of Defense Gates met with the Democratic caucus in the Senate. (Such meetings are held regularly.) Gates warned of the consequences if the Bush Administration staged a preëmptive strike on Iran, saying, as the senator recalled, “We’ll create generations of jihadists, and our grandchildren will be battling our enemies here in America.” Gates’s comments stunned the Democrats at the lunch, and another senator asked whether Gates was speaking for Bush and Vice-President Dick Cheney. Gates’s answer, the senator told me, was “Let’s just say that I’m here speaking for myself.” (A spokesman for Gates confirmed that he discussed the consequences of a strike at the meeting, but would not address what he said, other than to dispute the senator’s characterization.)

The Joint Chiefs of Staff, whose chairman is Admiral Mike Mullen, were “pushing back very hard” against White House pressure to undertake a military strike against Iran, the person familiar with the Finding told me. Similarly, a Pentagon consultant who is involved in the war on terror said that “at least ten senior flag and general officers, including combatant commanders”—the four-star officers who direct military operations around the world—“have weighed in on that issue.”

The most outspoken of those officers is Admiral William Fallon, who until recently was the head of U.S. Central Command, and thus in charge of American forces in Iraq and Afghanistan. In March, Fallon resigned under pressure, after giving a series of interviews stating his reservations about an armed attack on Iran. For example, late last year he told the Financial Times that the “real objective” of U.S. policy was to change the Iranians’ behavior, and that “attacking them as a means to get to that spot strikes me as being not the first choice.”

Admiral Fallon acknowledged, when I spoke to him in June, that he had heard that there were people in the White House who were upset by his public statements. “Too many people believe you have to be either for or against the Iranians,” he told me. “Let’s get serious. Eighty million people live there, and everyone’s an individual. The idea that they’re only one way or another is nonsense.”

When it came to the Iraq war, Fallon said, “Did I bitch about some of the things that were being proposed? You bet. Some of them were very stupid.”

The Democratic leadership’s agreement to commit hundreds of millions of dollars for more secret operations in Iran was remarkable, given the general concerns of officials like Gates, Fallon, and many others. “The oversight process has not kept pace—it’s been coöpted” by the Administration, the person familiar with the contents of the Finding said. “The process is broken, and this is dangerous stuff we’re authorizing.”

Senior Democrats in Congress told me that they had concerns about the possibility that their understanding of what the new operations entail differs from the White House’s. One issue has to do with a reference in the Finding, the person familiar with it recalled, to potential defensive lethal action by U.S. operatives in Iran. (In early May, the journalist Andrew Cockburn published elements of the Finding in Counterpunch, a newsletter and online magazine.)

The language was inserted into the Finding at the urging of the C.I.A., a former senior intelligence official said. The covert operations set forth in the Finding essentially run parallel to those of a secret military task force, now operating in Iran, that is under the control of JSOC. Under the Bush Administration’s interpretation of the law, clandestine military activities, unlike covert C.I.A. operations, do not need to be depicted in a Finding, because the President has a constitutional right to command combat forces in the field without congressional interference. But the borders between operations are not always clear: in Iran, C.I.A. agents and regional assets have the language skills and the local knowledge to make contacts for the JSOC operatives, and have been working with them to direct personnel, matériel, and money into Iran from an obscure base in western Afghanistan. As a result, Congress has been given only a partial view of how the money it authorized may be used. One of JSOC’s task-force missions, the pursuit of “high-value targets,” was not directly addressed in the Finding. There is a growing realization among some legislators that the Bush Administration, in recent years, has conflated what is an intelligence operation and what is a military one in order to avoid fully informing Congress about what it is doing.

Read all of this article here. / The New Yorker