Larry Ray : Our Schools, Their Madrassas 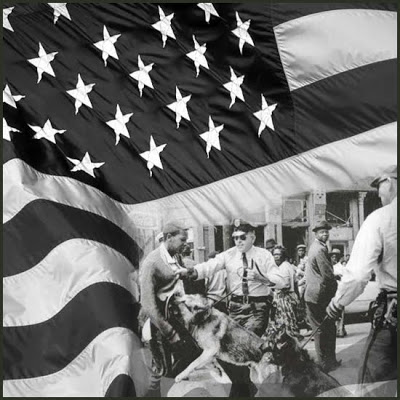 Graphic by Larry Ray / The Rag Blog.
Letters to Charlie:
Our schools, their Madrassas

Letters to Charlie is a collection of emails to a long time friend. He worked hard and did very well. To many of his wealthy conservative friends, Charlie is an anomalous dreaded liberal. He forwards many of their hateful and distorted right-wing emails to me and I frequently send Charlie my free-flow take on them. Education was the topic for a recent series… Islamic Madrassas versus American schools.

Imagine if all the glistening red white and blue was stripped from the history of America that is, or was, taught in our public schools. Americans just do not want to talk about or remember the darker history of this great country. But a mere 46 years ago black Americans were denied basic rights and could not drink from the same water fountains designated for use by white people. The same went for transportation, eating in restaurants, staying in hotels or motels, or voting without intimidation or paying a “poll tax.”

1964 is not that long ago, Charlie. There was even great doubt that JFK could be elected as president because he was, gasp, a Catholic! Senator Joe McCarthy’s Commie blacklist hearings and the actual existence of an “un-American activities committee” are well within your memory and mine.

The history of the American development of oil production in Saudi Arabia and the Middle East is a sorry tale of arrogance and complete disrespect for customs and religion in that region. Ancient tribal areas had been carved up into countries with boundaries drawn by colonial imperialists…

Great Britain and the USA have a shameful history of using our Christian badge of correctness to disregard any other religions as misguided and wrong. We still do that. Imagine Islamic missionaries roaming the cities and towns in rural America seeking to convert Christians.

Our public schools were wisely and purposefully made to be secular and apart from religious control or curriculum. There is no mention of setting up schools in the Constitution. We are constitutionally bound to respect and practice freedom of religion in America. That, however, mostly translates to freedom to be Christian of some stripe or another. Jews continue to fight antisemitism and did not easily build their Synagogues and other places of gathering without lots of ugliness. Muslims are having an even tougher time of it here being accepted as American citizens.

We invaded Iraq and blew up its already minimal, but functioning, infrastructure. People who suddenly lose their electricity, water, and sewer service and who have family members rounded up and even killed get pretty mad and disgusted. Americans would react the same way if some massive power invaded us for no apparent reason and crippled our basic infrastructure.

Our massively superior military took over large parts of Iraq, kicked in doors of the homes of ordinary people, wildly looking for a relatively small number of Islamic extremists. Young American soldiers by and large speak and understand only American English, so just like in Vietnam, the Iraqi’s became the “foreigners.” Our ignorance of historic Sunni-Shiia religious sectarian hatreds just added to needless stirring up of an old hornet’s nest.

Now, a trillion dollars later with 4,500 dead American kids, and tens of thousands wounded, and hundreds of thousands of innocent Iraqis dead, we are still applauding our gift of bringing the first real Democracy to the Middle East. Except that has not happened.

“Freely Elected” candidates in Iraq are in a 50-50 standoff, each hewing to their tribal and sectarian power bases to get all they can for their side. Screw democracy. Screw America. Sharing is not part of the vocabulary in the ancient, tribal Middle East.

How much hatred does it take to pull off something as horrible and seemingly impossible as the 9-11 attacks? This relative handful of religious zealots not only triggered a fierce response by the American military, they also made it easy for this infuriated Christian nation to throw all Muslims into one big bad category.

So, what does a 234-year-old America teach in our secular schools? What do they teach in their ancient Islamic Madrassas? Should there be a threatening gulf between the two ways of educating our young?

You and I have traveled widely and lived in other countries, and have a sense of global diversity and inequity, Charlie. Most Americans never go abroad in their lifetimes, and for the past 40 years American students have not been taught much world or American history in public schools. A huge percentage of Americans have no sense at all of history, geography, or civics. We have been irresponsible in our materialism and now are pitifully lagging behind other developed nations in so many basic areas of education, health care, social responsibility, and even happiness.

And as if this was not enough, America, the land of the free, is now imprisoning itself with polarization, laziness, obesity, greed, denial, and indifference. Our roads, dams, and bridges are old and in disrepair, but there is a loud cry for no new taxes. And a loud conservative minority would do away with a strong, centralized federal government.

In past national times of crisis in America the young have taken up the banner of change and helped move this country forward. I don’t see America’s under-educated, over indulged, and seeming directionless young people being able to or even wanting to step up and face the challenge.

2 Responses to Larry Ray : Our Schools, Their Madrassas